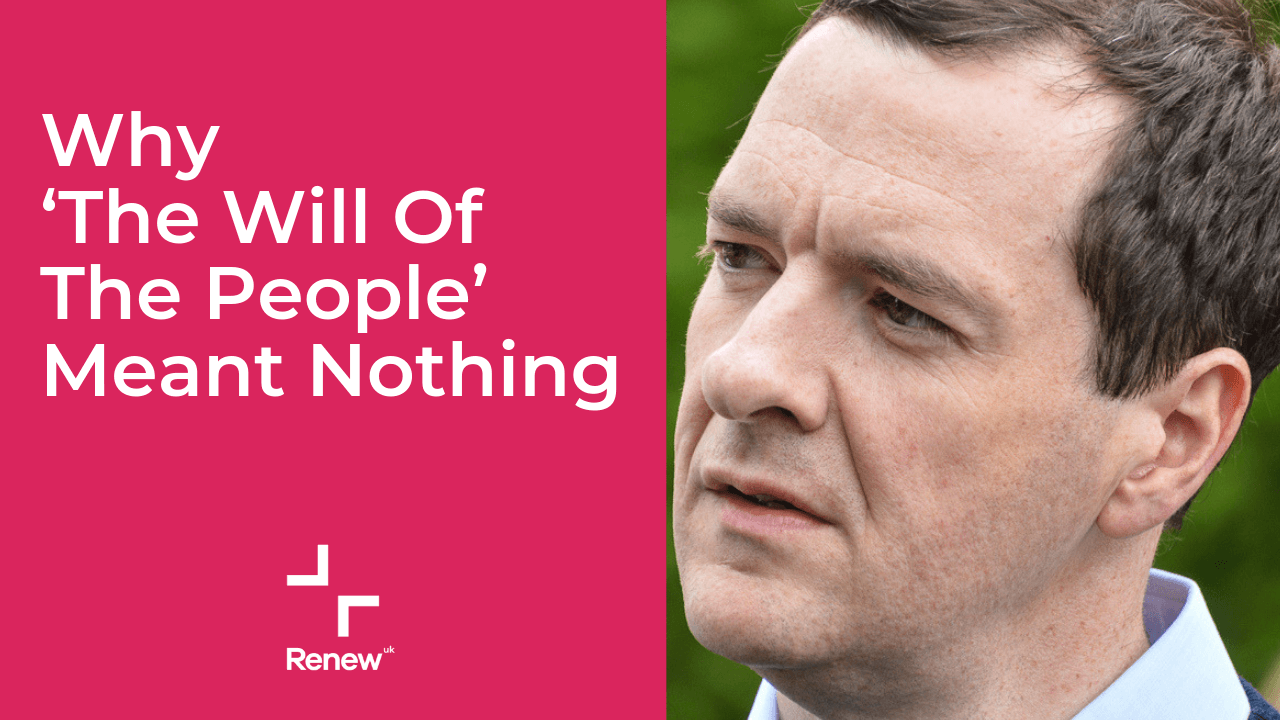 Why ‘The Will Of The People’ Meant Nothing

In this opinion piece, Gwen Jones comments on Tory failures to listen to the people on local government.

‘The Will of the People’ has become established as one of the most defining phrases of the entire Brexit saga. Since the day results broke in 2016, politicians have fallen over themselves to honour it.

“The people have spoken”, warned Theresa May in an address made to the BBC in the aftermath of the referendum. “We will deliver on that”.

Now, this may all be well and good - nothing wrong with a bit of democracy, eh? Unless that is, you’re George Osborne, in which case, you probably don’t care about the ‘will of the people’ quite so much. The fact is, the Tories’ commitment to the popular will is a recent development.

Since 2001, there have been 50 mayoral referendums held in the UK. In each case, constituents were given the opportunity to replace their existing system of local government with a directly elected city mayor. Of the 50, only 15 voted in favour of adopting a mayoral system.

11 of these votes were held in 2012, in the cities of Birmingham, Bristol, Coventry, Doncaster, Leeds, Manchester, Nottingham, and Sheffield among others. Of these 11 cities, only two - Bristol and Doncaster - voted to establish or retain their city mayors. The other nine cities rejected the proposal, most by a significant margin.

Well, it turns out this was the wrong answer - as they have now found out.

In 2016, the then-Chancellor took measures to correct the rash decisions made by the poor, foolish souls of Birmingham, Coventry, Manchester and Sheffield, imposing mayoral devolution on these cities despite its explicit rejection just four years earlier. It seems that with Osborne ‘I want’ doesn’t get.

Local authorities for each municipality were offered more devolved powers and substantive funding increases on condition that they accepted Osborne’s agenda. When deals were agreed, it allowed the Chancellor to claim that cities ‘accepted’ his version of mayoral devolution; Osborne promised that he would not “impose his model on anyone”, because in exchange for his pork barrel payouts, his new local authority mates could do all the imposing for him.

It’s difficult not to admire his nerve, really. All nine cities that said no to city mayors have now been given one anyway, meaning fundamental change has been made to our democracy with no public debate whatsoever.

Of course, as was so often the case with Osborne, there was a political agenda that needed to be pushed. The Tories have a historically poor relationship with the North and by establishing himself as the commander of the Northern Powerhouse Mr Osborne could hope to form alliances with Northern municipal leaders. Once in place, local leaders would take up front line positions in the attack on government spending and public services - far-reaching powers gave leaders more scope to make cuts.

It’s no wonder that the people of England feel ignored, when, more often than not, their voices don’t seem to count for anything.