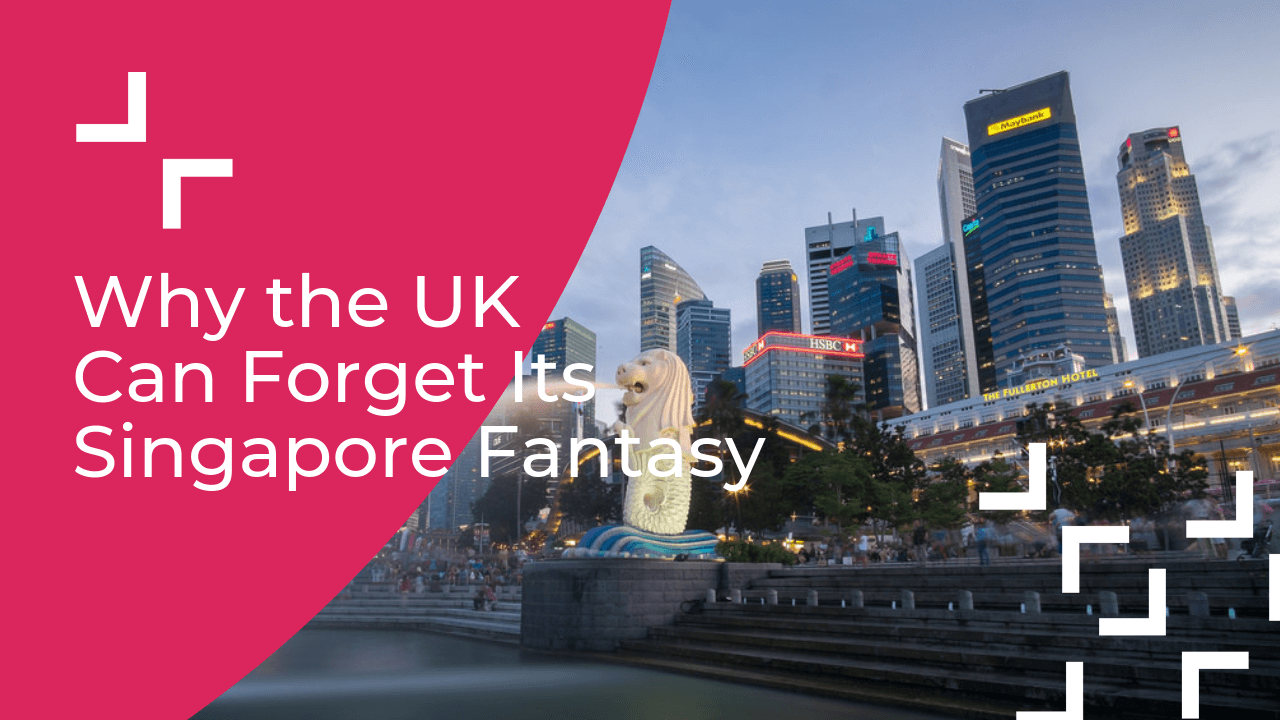 Why the UK Can Forget Its Singapore Fantasy

In this opinion piece, Renew's Paul Gerken gives his verdict on the so-called 'Singapore model' for a post-Brexit Britain.

Much has been made of the opportunity that Brexit provides to turn the UK into a ‘Singapore of the North Sea’. Ministers fawn over the city-state’s vast wealth, accumulated over a relatively short period of time, by a country with seemingly precious little natural resources. From literally half a world away, the model seems clear and attainable; remove pesky taxes on businesses and individuals, market yourself as a pro-business hub on the edge of a huge market and watch the wealth flow in.

Something that sounds too good to be true usually is and this case is no different. Singapore is incomparable to the UK in terms of comparative advantage, tax structure, government spending and society, making any notions of emulating the city-state a complete non-starter.

We must first understand that Singapore has grown astronomically by being an oasis of stability and ethical practice surrounded by large nations with questionable records on the same measures. The UK holds no such advantage. We cannot go to the world and say, with a straight face, build your regional HQ or factory here because the Danes/Swedes/Germans will stifle you in a quagmire of backhanders and dodgy regulation. We have synonymous standards and practices. So how do we take a lead against our neighbours? The quick fix, openly threatened by the Tory front bench, is a comparative advantage created by lowering taxes.

Yet, let’s be clear - Singapore isn’t a completely low-tax economy, as it needs to raise its taxes from somewhere. Yes, income taxes and business rates are low, but do you fancy driving a car? That’ll be around US$30,000 to give you the right to purchase one. Once you have purchased your ‘Certificate of Entitlement’, you can by a car with huge taxes added to it. As an example, a $17,000 Mitsubishi can be $104,000 in Singapore. How would UK workers reliant on cars to get to work feel about such a measure to balance the national books?

We then need to understand how Singapore works as a nation to allow its tax and spend model to be acceptable to its people. Seen from afar, we think of a low corporate tax structure and tend to conclude that the nation couldn’t be proactive in social support and structure for its people. This is ignorant of the importance Singapore places on communities.

In the 1960s, Singapore evaluated that, if the housing in Singapore were left to private developers alone, locals would eventually be priced out and left without affordable housing solutions (sound familiar?) The Singapore state took action to create the Housing Development Board, which not only built houses but functioning communities with medical centres, shops, fitness areas and parks. Today, 80% of Singaporeans live in housing created by this state body. Would a Tory government trade off huge tax cuts for businesses and individuals with a massive state-funded house-building programme? Unlikely.

Yet we should not overstate the social reach of the Singaporean spending. State spending makes up just 17% of the country’s economy, compared to approximately 41% of the UK. If the UK were to follow the Singaporean economic model, vast swathes of our public services would need to be completely removed, not just trimmed down. You are looking at a revenue-spend model that cannot even begin to contemplate maintaining a National Health Service for over 65 million people.

It is also vital to understand that Singapore’s vast wealth is supported and managed by sovereign wealth funds that are the cornerstones of the Singaporean economy. Temasek Holdings is the ultimate owner of banks, telecoms, airlines, real estate and huge amounts of equities listed on the Singaporean stock exchange. These funds proactively manipulate the country’s economy to maintain growth and keep the people prosperous. Happy and prosperous people are less likely to revolt, after all, and Singapore meticulously trains an eye on keeping its people content. Such is the need when yours is an autocratic government with “fig-leaf” elections taking place every five years – another vital pilar in the framework for the Singapore success model.

Lastly, we must underline that Singapore is a full, founding member of ASEAN, South East Asia’s regional political body. Whilst ASEAN does not have the same level of political integration as the EU, Singapore does not attribute any of its wealth or success from maintaining a distance from its neighbours – quite the opposite. It has always fully engaged with them so as to be a fundamental leader in its region, being able to navigate it along a path that suits its own ends. Which certainly seems reasonable, if not obvious.

Having lived in Singapore for seven years, I have a great affection for the country and, like many others, have marveled at its economic success. Yet what works for one country might not necessarily work for another, and this is certainly the case with Singapore. Their model relies upon economic activism, huge government housing projects and a limited free press to deliver prosperity and security. It is a trade-off that Singaporeans have been willing to accept; yet it is a model with elements that neither a UK government nor UK voter would stomach.

What is clear, however, is that Tory eyes shine brightly at the notion of convincing us all that by simply reducing taxes on wealthy individuals and businesses, we can have it all.