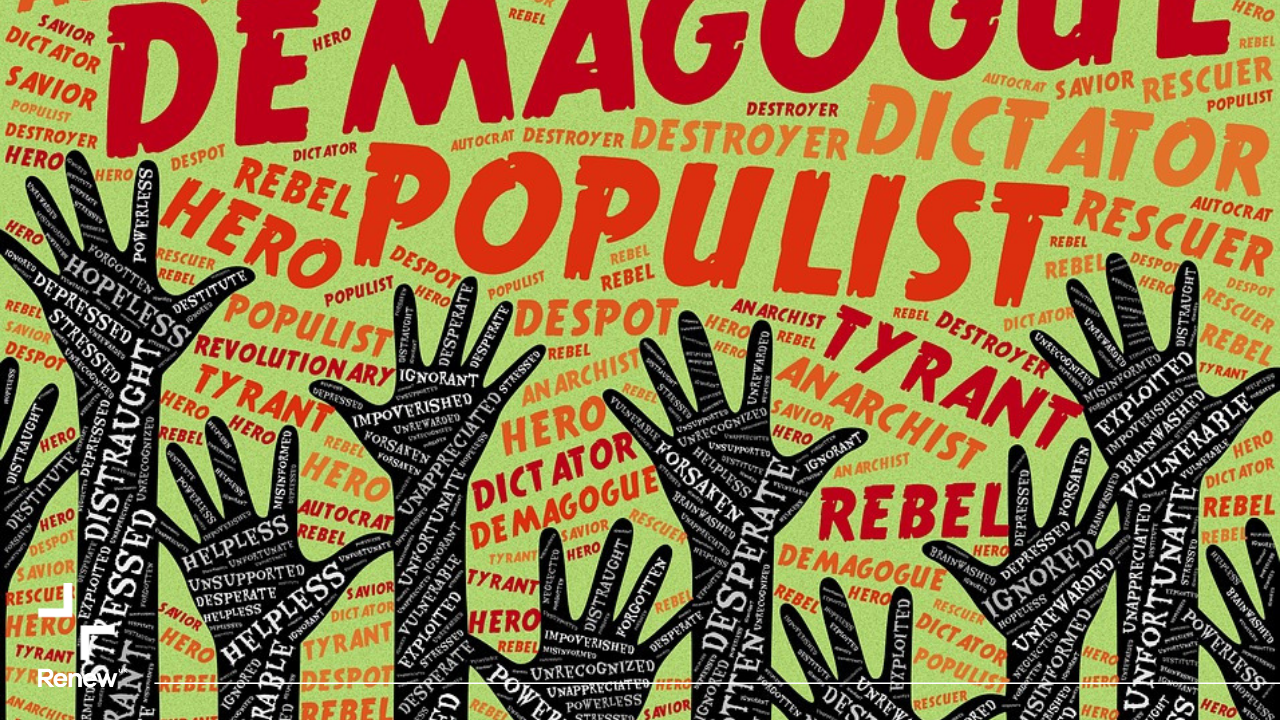 Why Centrism is Not the New Populism

In this opinion piece, Renew’s Gwen Jones breaks down the debate on whether centrism in its older guise is the solution to widespread populism.

Its appearance in the mainstream media is becoming more and more commonplace. Whether it is Orbán in Hungary, Trump in the US, Le Pen in France or Brexit in the UK, populism is whipping up writers and politicians alike into hysteria.

It’s a word that scares elites across the Western world; a parasite that has crawled out of the darkest crevices in our democracy, intent on destroying all aspects of political life in the free world.

There is no shortage of voices warning about the dangers populism poses to liberal society. But as the West’s obsession with populism takes hold, the powers that be are scrambling desperately to crush the tide. They lament, with great fervour, the threat to the beloved system of democracy that they have created.

However, we often fail to question the relationship between populism and the workings of democracy itself. In fact, the rise of populism - and our incessant fixation with it - is telling of how we currently think about democracy and what we really mean by ‘power for the people’.

Perhaps our problem with populism stems from our tendency to our Western, liberal system as democracy in its final form; a perfectly balanced and unalterable thing to which any alternative poses a dire and inadmissible threat.

The populist movement is, of course, proof that this couldn’t be any further from reality. What’s more, it most certainly isn’t going anywhere fast - stagnant real wages, widening inequality and crumbling public services are a constant reminder of the failure of successive governments to bring about the shared wealth and prosperity that were promised for the post-manufacturing age.

It is in light of this that the familiar and longstanding relationships between people, politics and ideology have begun to come apart at the seams.

It is also why the Independent Group announced itself as a political entity after its seven founders split from the Labour party in February. Since then, its membership has grown to 11, after one more Labour and three more Conservative MPs defected to their ranks.

The idea? To reclaim the centre ground of British politics, to ‘leave the old tribal politics behind’, and to ‘pursue policies that are evidence-based, not led by ideology’. In short, British party politics has, to its detriment, been dragged to extremes on both sides of the left-right spectrum. The system is broken and new innovative solutions are required to heal existing divides and deliver solutions that work for the 21st century.

While many of us may be able to agree with the diagnosis, it is less clear that the Independent Group will come up with the solution. According to them, the answer to the country’s problems lies in a long-awaited centrist revival. While this may seem an obvious antidote to the conquest of British politics by both the hard-left and hard-right, it fails staggeringly to take into account the true character of the crisis.

Advocates of ‘centrist’ politics the world over talk with disdain about the rise of ideologues, without ever quite realising the irony that so often pervades their critique. Likewise, the Group’s ardent opposition to ideology rings immediately hollow - its Labour founders all hail from the Blairite wing of the party. All are long-time advocates of the style of Third Way politics made popular during the Clinton/Blair/Brown era of the 90s and early 00s.

To put it bluntly, while condemning major parties for their commitment to outdated ideologies of the 20th century, the Independent Group is guilty of precisely the same crime. Far from radically innovative solutions, the IG has promised to deliver and that the country so desperately needs, harking back desperately to 1997 will do nothing to solve the problems we are currently faced with more than 20 years down the line.

Worse still, the Independent Group fails to realise the role that their version of politics had in shaping the current political landscape they so despise. The reckless financialisation that occurred under Blair’s government is responsible, in no small part, for the crash of 2008 and the devastation to British society that followed. Centrism in this incarnation has a lot to answer for, and its failures serve as fertile ground for populism to flourish.

Indeed, it is this inability to own up to failure, through fear or naivety, that has bred such a deep distrust in the political class.

If the problem is populism, a revival of the 90s is hardly the magic elixir.

That said, there is still a need for reasonable, pragmatic, data-led policy. It is simply that we cannot rely on the same pre-crash thinking as a way forward. When faced with new problems, we must be able to come up with new solutions. As Albert Einstein is credited with saying: “The definition of insanity is doing the same thing over and over again, but expecting different results.”

The rising tide of populism might feel uncomfortable to those tasked with protecting the current order, but the solution cannot be to seek comfort in the same-old familiar ideas.