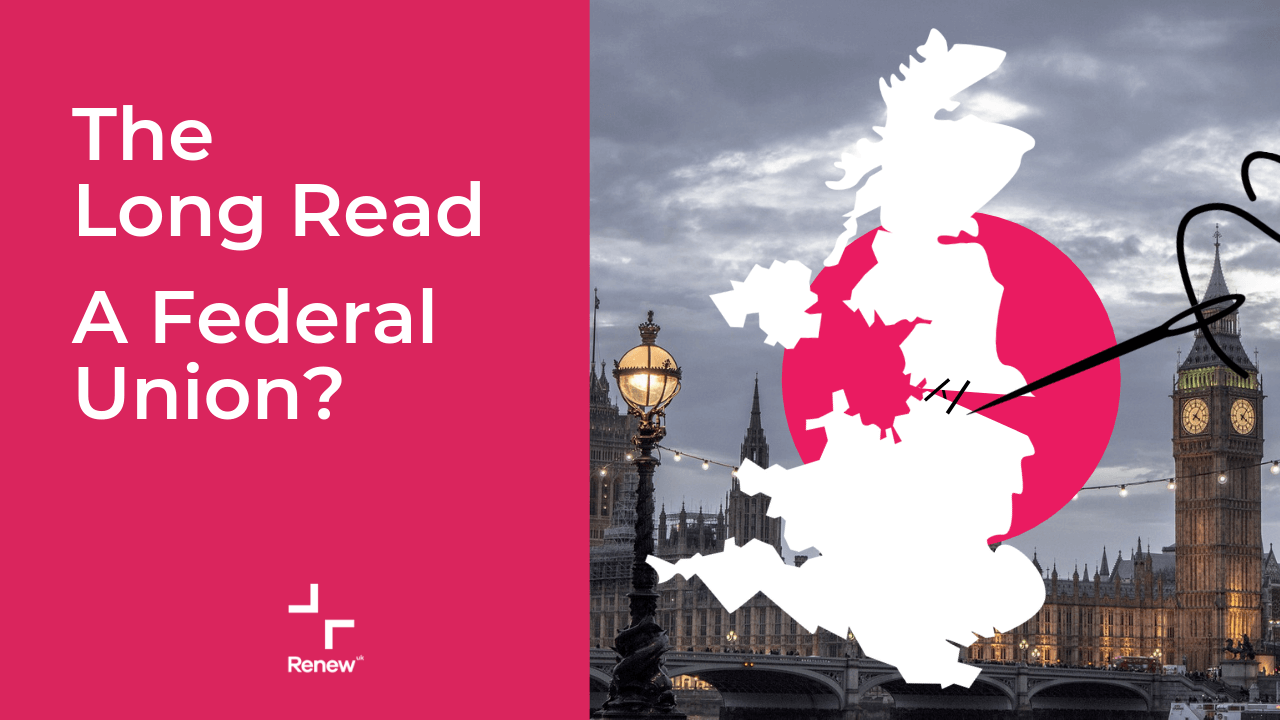 The Long Read: A Federal Union?

In this opinion piece, Renew supporter Emma Rome puts forward a case for federalisation in the United Kingdom.

Recently, Ben Carpenter wrote about the concept of English devolution on this website, framing it in the context of Brexit. He correctly notes how devolution has given Scotland some benefits, such as unlimited Sunday trading hours, free prescriptions and free eye tests.

He also rightly suggests that England is at the mercy of Whitehall. But Scotland is too, albeit to a lesser extent. And Wales. And Northern Ireland. This is the nature of the centralised government we have.

That said, Scotland and Wales both enjoy a certain amount of devolution. Despite that, it's often said that, on average, England gets the better end of the deal compared to the other countries that make up the United Kingdom. It's also unfortunately true that many communities just south of the Scottish border aren't doing so well compared to Scotland.

But simply offering a devolved "parliament for England" as a counterpoint to the Scottish and Welsh ones would miss the bigger picture.

Let's consider one sector - transport investment by the government. London receives almost three times as much investment per person in its transport infrastructure than any other UK region.

London has two unique factors that partly justify this. Tourists will almost always include London as part of their visit, since it’s the capital. Thanks to the way the statistical regions have been drawn up, London's commuter population includes substantially more than the population actually within that region. However, this problem has been made worse by Boris Johnson, who made one of his goals as Mayor of London to increase London's population to its highest ever number (in February 2015, London's population broke its previous record high set in 1939). Large high-density cities are disproportionately expensive to create effective transport systems for and inevitably create additional health, employment, and social inequality issues for residents as well.

To be sure, as the national capital, London should have a bit more investment than other places. Tourism is after all one of Britain's major sources of foreign revenue.

But other regions of the UK have long been starved of investment. And this has to end. We need a new way of thinking about investing in the country.

It's the nature of government to centralise power, at least in the UK. This is why Westminster and Whitehall have a long tradition of focusing investment in London and the South East. They invest in London because of its large population, and individuals then move there because that's where the investment is. This creates a feedback loop that, left unchecked, causes the social inequality we have now. Inevitably, underinvestment in places far from London and an inability to make their political voices heard feeds independence movements and disillusionment with democracy, encouraging lower voter turnouts.

But simply creating a "parliament for England" won't really solve this problem.

Let's suppose this parliament is based in Birmingham, or in Manchester. Realistically, that city will become a new centre for business, quite likely with its major airport receiving new development and better transport links. But it won't help the other major cities in England. The UK has room for more than just one world-class city, or even two.

So what do we do? We federalise. Rather than our present centralised form of government, we should devolve power to the most local level where it can be meaningfully applied.

Before we thought of the United Kingdom as a union of England and Scotland, England was a country formed of a union between Wessex, Mercia, and others. This would be a useful level to devolve power to, ensuring investment gets distributed properly.

England could, for administrative purposes, be split into a small number of multi-county regions. For example, perhaps the divisions could be Northumbria, Mercia, Wessex, East Anglia, Greater Sussex, and London. This roughly follows the lines of Britain's early English kingdoms. These could have devolved powers broadly similar to what Scotland has (and Wales and Northern Ireland could have the same). In fact, these devolved powers should go much further, to include full responsibility for transport investment, with the ability to run a bus network, commission new railway lines, plus business development incentives and maybe even the ability to raise taxes. Scotland, Wales, and Northern Ireland should have similar powers within their jurisdictions.

It's only right to devolve power if we want investment across England to be governed responsively to the needs of each region. And it's only right that we give the other countries that make up the United Kingdom the same ability to empower themselves that England would have.

Without such subdivision, any devolved power for England as a single entity would result in a continuation of the same ‘London first’ investment policy that we currently have.