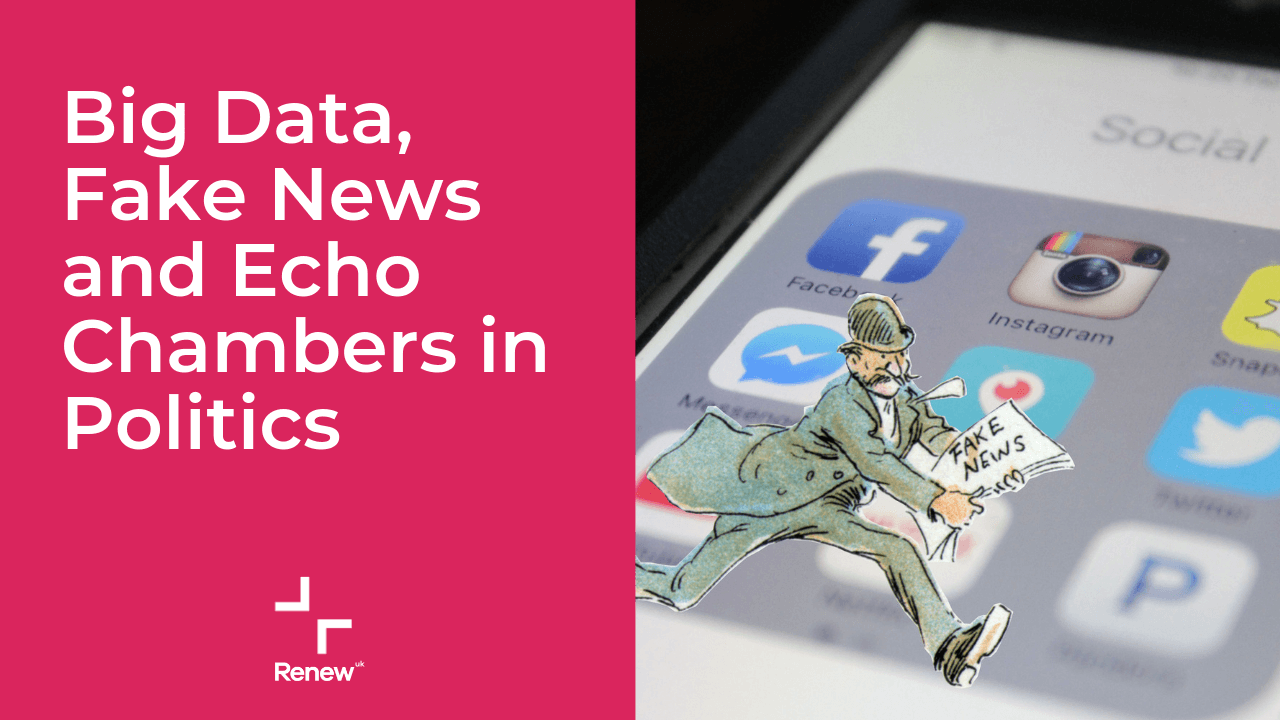 The case for Regulation against Big Data, Fake News and Echo Chambers in Politics.

In this opinion piece, Renew supporter George Muscat explains why you should be worried about the impact of big data on politics.

One thing that those from across the political spectrum can probably agree on is the degeneration of political discourse in our time.

Perhaps the best example of this was the abuse of Diane Abbott during the 2017 General Election campaign. The then Shadow Home Secretary received almost half of all online abuse during the campaign, being singled out on racial and gender grounds.

Shortly after the campaign, she told a parliamentary debate that she had received death and rape threats.

Abbott’s experiences align the mindless abuse of Anna Soubry by male Brexiteers outside Parliament. Indeed, it was not so long ago that Jo Cox was tragically slain by a far-right nationalist terrorist.

These are not isolated incidents. They speak to a rise in violence when voicing political views.

Let’s be clear: this is not an unavoidable hallmark of passionate debate. This vile abuse of female politicians is a disgraceful symptom of our degenerating politics.

There is no doubt that the anonymity of social media emboldens online trolls. Fake news and online echo chambers do not lead to a balanced or informed debate.

Research has shown social media’s role in facilitating fake news. A study of the 2016 Presidential Election in the US found that popular fake news stories were shared more on social media than mainstream news stories (Silverman, 2016).

Around 7% of the US adults polled in another study admitted to having believed fake news stories during the 2016 campaign (Allcott and Gentzkow, 2017).

Those who consumed more media content were more likely to believe fake news, as were those with segregated social networks.

This suggests that there is something psychologically gratifying about sharing news stories which reinforce our preconceived positions and that social networks act as echo chambers which harden our views against each other, even when the content is false.

Fake news is only part of problem for political social media content. Highly sophisticated tools which use big data to isolate and target individuals for political advertising are employed by all major political parties.

As those of us whose entire adult lives have been spent online grow older, we move closer to a terrifying place, where tech giants know more about us than we do about ourselves.

Recent scandals about giant tech companies profiting from this data confirms the fact that these are companies motivated purely by profit. They will sell our data and their marketing tools to anyone with a fat enough cheque book.

This threatens to fundamentally undermine our democratic processes and demands strict regulation. I am deeply uncomfortable with personalised advertising appearing on my screen with a view to influencing my political choices.

After all, democracy is meant to be a system in which individuals decide for themselves what they want, not one in which our choices are subject to scientific conditioning.

Both fake news and data-driven advertising drive us further apart and undermine our ability to make free, informed political judgements.

In a time of increasing polarisation and democratic subversion, we must act with strength and urgency against the proliferation of political content on social media. It only acts to increase the power of big tech companies and political parties over us, setting us against each other.

We need strong regulation to make companies liable for the content shared on their platforms, and above all to prevent them using our data as a lucrative product to pedal to those who will use any means available to gain political power.