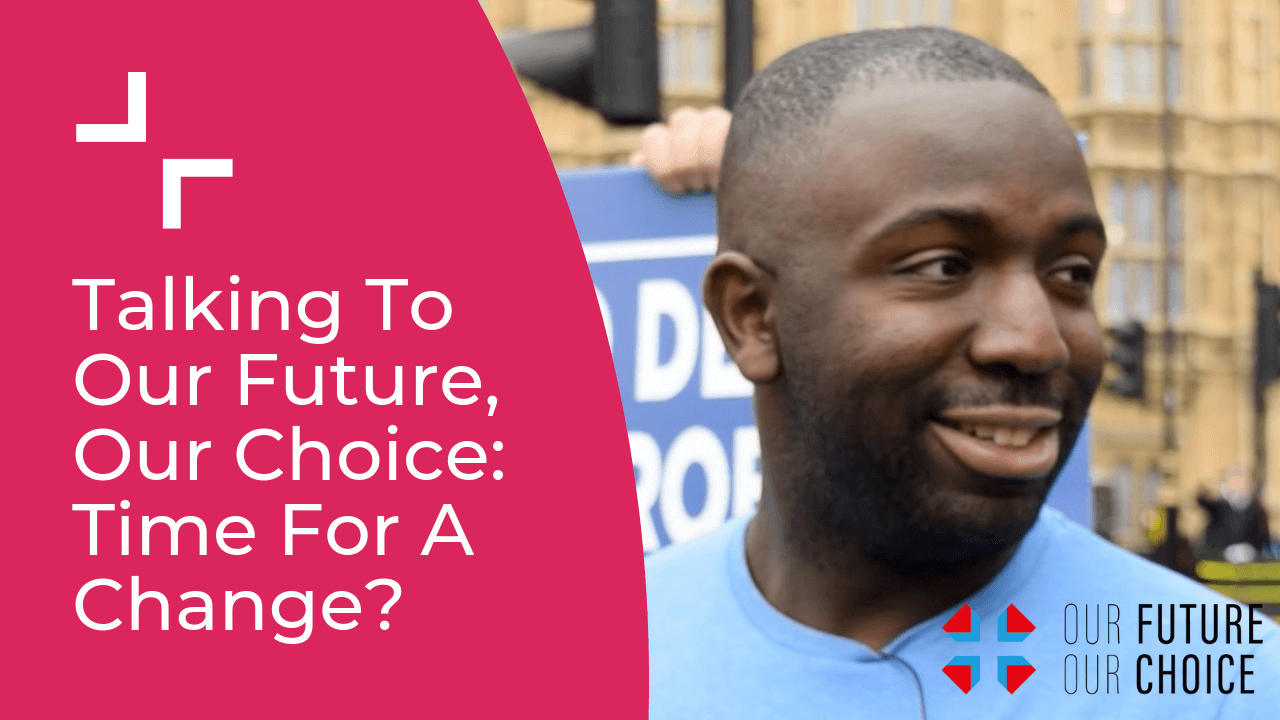 Talking To Our Future, Our Choice: Time For A Change?

When Renew met outside Parliament for the ‘meaningful vote’ on Theresa May’s Brexit deal, we bumped into Our Future, Our Choice’s footsoldier Femi Oluwole.

A permanent fixture these days on the streets of Westminster, Femi and OFOC campaign for a ‘People’s Vote’ on the Brexit issue, using hard facts to try and convince people of their cause.

Within this context, we thought it would be interesting to ask Femi what he thought would come beyond a second referendum. Of course, it is not known whether Britain would vote to continue with Brexit or remain in the European Union if given another say - but how might we go about fixing our domestic politics regardless?

Femi believed that we need to “make a change right now” if we are to have functional government in the future. When pressed, that change according to Femi would be the abolition of first past the post - the ‘winner-takes-all’ electoral system that makes it difficult for non-established parties to gain a foothold.

Femi makes a well-reasoned, practical point here. He was right to suggest that any new party entering politics in the UK will struggle to gain a foothold, given its non-proportional voting system. But then again - how have the institutional parties shown that they deserve our votes?

If an election had been held the next day, Femi would have voted for “a party that wants to stop this mess”.

And what would that party look like, we asked?

“Green”, Femi replied - without, might we suggest, a ton of enthusiasm.

When we proposed that it might be time for something different, Femi replied:

“The first thing that needs to happen is voter reform”.

Fair enough. But let’s look at the maths.

There are 71,522 potential voters in Peterborough, according to Parliament’s website. In 2017, the Labour candidate won with a slim majority of 607. 22,950 votes were cast for her, and 22,343 votes cast for the Conservative option.

Imagine if you could convince half of each of these groups that their parties no longer represent them - an argument much easier to make now, given the disruptive effect of Brexit on both Labour and the Conservatives.

Were you to add those two halves together, you would get 22,647, rounded up to the nearest voter. That could easily be enough to win the seat - it’s only 303 votes away from the existing MP’s majority, after all.

Of course, convincing those voters is no small task. A Renew win in any Parliamentary seat would be one of the biggest stories of 21st-century British politics. But in this age of fluid political identities and collapsing party loyalties, many, many people are ready for a change.

So perhaps Femi is right - electoral reform comes first, and the new party comes after.

But are you prepared to wait for the establishment to provide that?