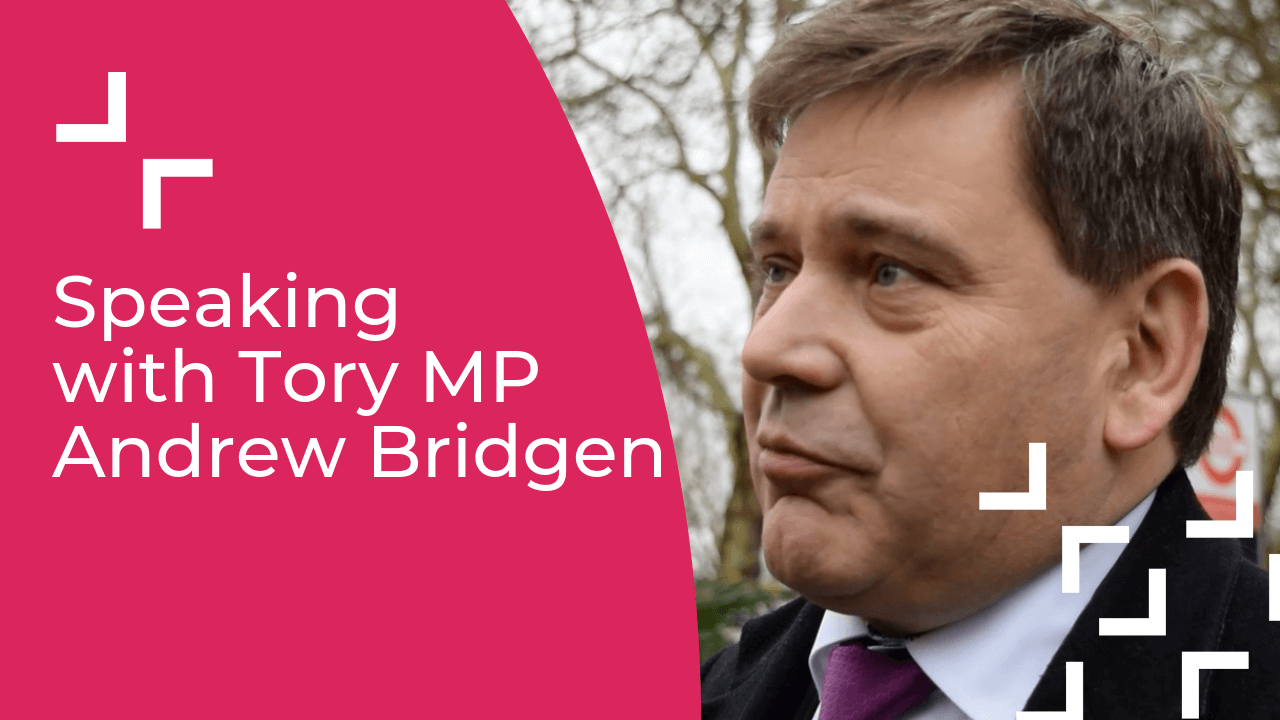 Speaking with a Tory MP Outside Parliament

On the day of Parliament’s ‘meaningful vote’ on the Brexit deal, we grilled pro-Brexit Conservative MP for North Leicestershire Andrew Bridgen.

Convinced that a “managed no-deal” was the only way to truly honour the referendum, Bridgen was very worried about the impact Brexit was having on his Conservative party. He predicted “cataclysmic” consequences at the ballot box were the Tories to “deliver Brexit in name only” through Mrs May’s deal. It didn’t seem to occur to him that the Leave campaign’s failure to identify exactly what Brexit meant during and after the referendum was part of the reason for her deal being such a botch-job in the first place.

Bridgen wants a “clean, global Brexit”, but we’re stumped if we know who is supposed to deliver it. It is not clear, anyway, what a “clean, global Brexit” is supposed to mean - was he referring to leaving the EU without a withdrawal agreement? What would change in Britain’s relationship to the rest of the world in making it more “global” after Brexit? Did it mean anything at all?

Our interviewee claimed that failure to deliver his vision would result in the rise of “extreme parties on the right and the left” whose leaders would “make Nigel Farage look like a Sunday school teacher”. If true, one can’t help but imagine where Bridgen would fit into this scary new political universe - would he have a party at all? It wasn’t clear.

Is this a man with an inspiring message for the future? The only “vision” Bridgen could offer to Britain’s youngest voters was reaffirming the “principle of free-market capitalism” in the next general election. The Conservative Party’s complete failure to do this already in the age of Corbyn should be a sign that unbridled faith in the market after 2008’s financial crash does not a good message make. Not when the young in particular feel this insecure in their job prospects. Not when they can’t even afford to rent a house.

This chat - held on a day of muted excitement in Westminster as Theresa May failed in her bid to get parliament to support the Brexit deal - seemed to confirm what we all now know: the institutional parties that led us into this crisis no longer have the ability to steer this ship. Confidence in both May and Corbyn among their respective party members is embarrassingly low. The Lib Dems, meanwhile, failed their voters during the disastrous coalition period, undermining their credibility today.

Politics should now be opened up to Renew and other forces that better represent modern Britain with radical constitutional reform to ensure that this mess can never happen again. Our politicians need to be restrained - and, ultimately, retrained. Devolution, local democracy and reform in Whitehall under Renew is the only way that these deep problems can be tackled.

Watch the full conversation with Andrew Bridgen MP below - and read more about Renew across our website.