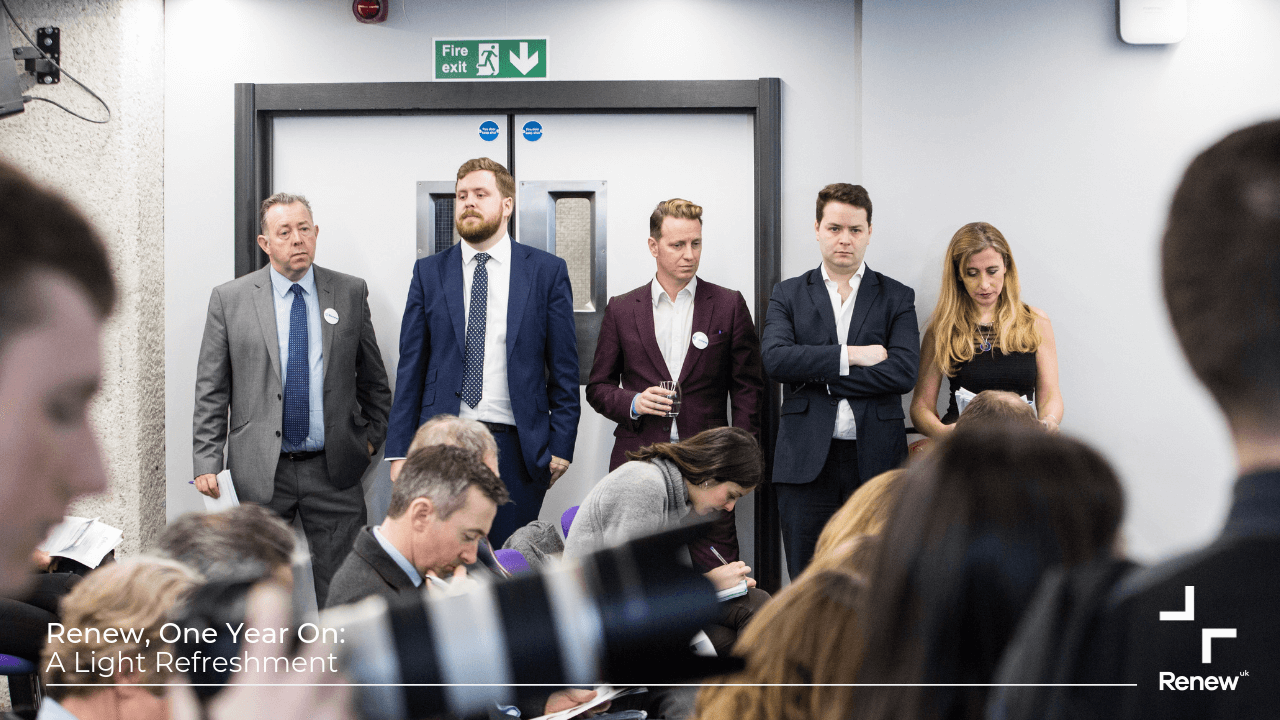 Renew, One Year On: A Light Refreshment

Back in February 2018, Renew had its official launch. One year later, Deputy Leader James Clarke humorously reflects on the day’s events.

On 19th February 2018, Renew was officially launched in front of the world's media at the Queen Elizabeth II Centre in Westminster.

The event itself was something of a blur; the whole team was understandably stressed and nervous as many of the candid images now hilariously testify.

We waited nervously for the room to fill up and were extremely glad to see cameramen from BBC, Reuters, AP, and representatives from across Europe all the way to Japan. We also learned an important lesson: always book a room too small for your purposes. Although we had over 80 journalists, photographers and candidates from dozens of countries present, our friends at The Sun felt compelled to point out that the room was not quite full by the end. Politics is an unforgiving business.

Once the event got underway, things went fairly smoothly, with two quite amusing exceptions.

Sandra Khadouri and I gave our speeches first, followed by James Torrance. James then stepped off the podium in order to give an interview to the Daily Politics, who were waiting outside. Once in front of the cameras James was confronted with the accusation that he had stormed off the stage in protest. 'No', James responded calmly, 'That was me stepping out briefly to talk to you!'

Storm in a teacup averted, we moved on to the press conference Q&A. The questions were thoughtful and fair, our answers reasonable and considered - with one notable exception. In a line I had already used many times in private and public meetings I referred to Renew as “like the military arm” of the Remain movement. It was a throwaway comment, referring to the fact that we were standing candidates rather than just marching, but the assembled press pricked up their ears; they had their headline.

Later that day, the articles began to be published. The picks of the bunch were the The Sun, who called us “Saboteurs”, and Breitbart reported that “Globalism Strikes Back!” For a short time, I was not the most popular person with our comms teams and vowed never to utter the infamous phrase ever again (although I was privately thrilled that we were being taken seriously by the other side).

Happily, scores of other moderate news outlets were very sympathetic and overall we were extremely happy with the outcome. The New European, The Independent and The New Statesman all wrote approving profiles, as did Le Figaro, El Pais and Il Folgio in Europe.

In the following days we had over 600 new candidate applications (briefly breaking the website) and a newfound credibility.