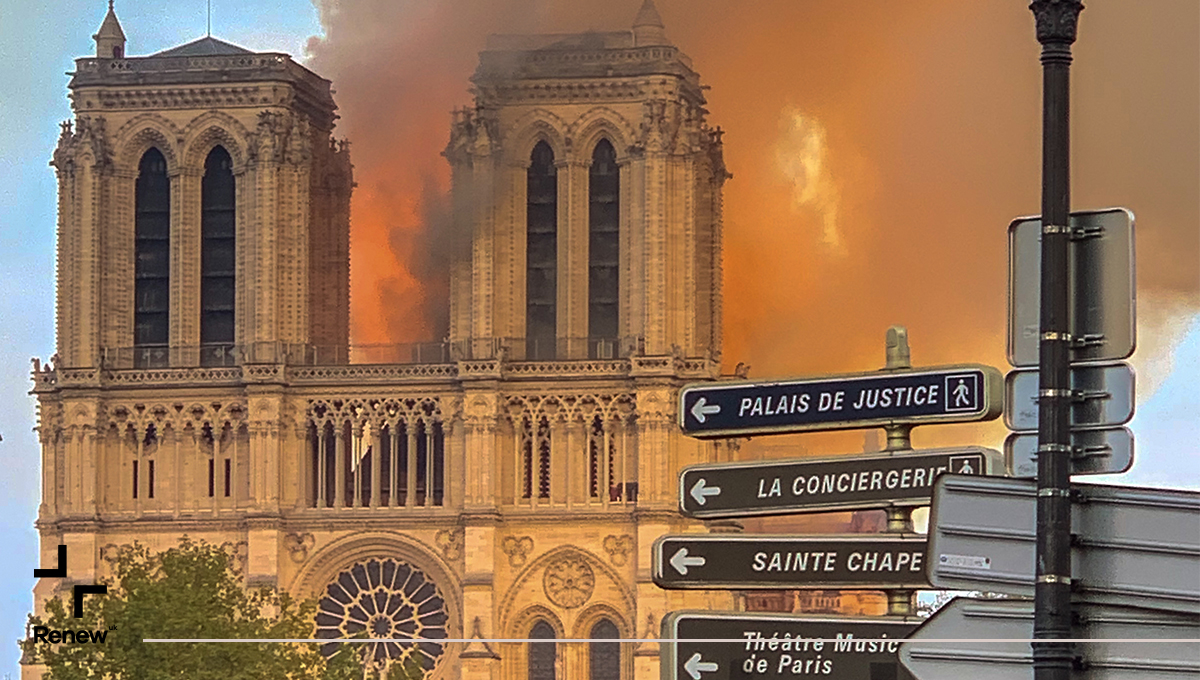 Why The Notre Dame Fire Feels Like Such a Tragedy

Renew's Gwen Jones discusses the tragedy of the Notre Dame fire - and why it is important we learn from it.

The first time I saw Notre Dame Cathedral was in the summer of 2008, during my first visit to Paris as a child. Like so many girls my age, I’d been dreaming of the City of Love for months before I ever got to see it for myself.

The cathedral represents something integral to the Parisian dream, emblematic of the lavish excesses of French bourgeois society. Built between 1163 and 1345, Notre Dame stands in the heart of the city, on the Île de la Cité. At the time of its construction, its immaculate design and masterful construction were a symbol of humanity’s highest capabilities. Notre Dame was, and will always be, a monument to progress - and to civilisation itself.

While, admittedly, its grandeur was likely somewhat lost on me at the time, I can still remember the feeling of reverence that comes from being in the presence of something so much bigger, older, and more significant than yourself.

At the time of writing, the internal structure of the cathedral has been all but completely destroyed. The blaze, first reported late yesterday afternoon, burned for most of last night, as over 400 firefighters battled to extinguish the flames. Parisians watched and wept as the cathedral’s spire finally collapsed. While its main structure - including the two iconic front towers - has now been saved, the timber frame, spire, roof and countless treasures inside have gone up in smoke. With them, a piece of history.

There is something deeply evocative about the destruction of a historic monument. A part of this comes from our unwillingness to accept such tokens of our history as impermanent. Notre Dame, built in an era of thatch, wattle and daub, was built - uniquely - to last. Made from stone, heavy timber and lead, the building was expected to stand the test of time. Indeed, the cathedral’s eternality seemed almost absolute, having survived both the French Revolutions and two catastrophic world wars.

Last night, this illusion was shattered. As the cathedral’s roof was slowly reduced to rubble, so was what it had come to represent - the eternal endurance of human civilisation. However painful, yesterday’s tragedy presents us with a valuable opportunity to reflect on our own mortality; we can afford to take nothing for granted, and our position in the world is infinitely more fragile than we may like to believe.

This level of humility is essential if we are to make responsible choices - the future is in no way guaranteed, and we must appreciate that the consequences we reap tomorrow are contingent on the decisions we make today.