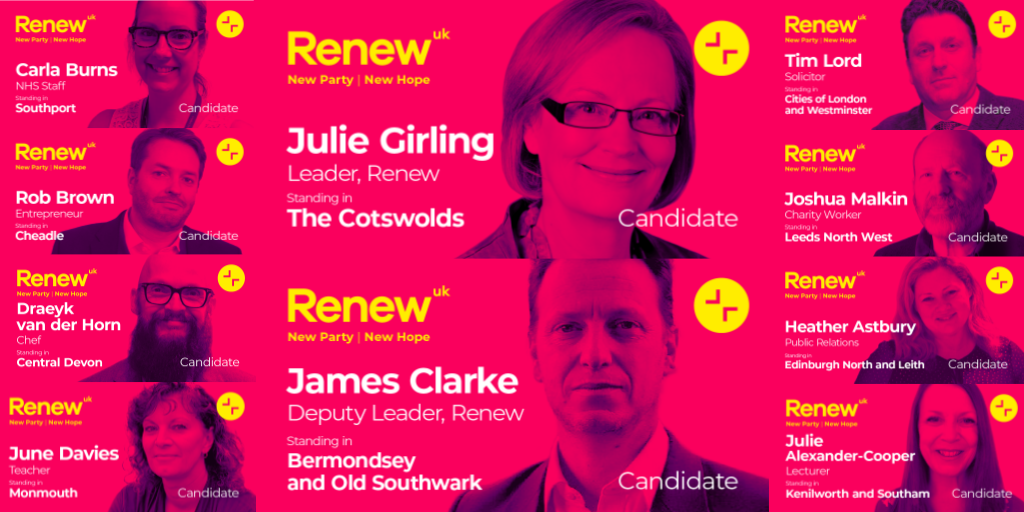 London, 12th August, 2019: At this critical time for the UK, Renew is announcing its first ten prospective parliamentary candidates and constituencies.

Further candidates will be announced in the coming days and weeks.

Renew launched in 2017 as a vehicle for radical reform for people from outside politics, we currently have a shortlist of over 120 candidates nationwide. We oppose the government’s handling of Brexit and are campaigning for a People’s Vote to settle the issue.

Our party believes that the UK should remain in the EU and be a strong voice for reforming politics at all levels. The best deal in our partnership with the EU is still available - it’s the arrangement that we already have as members.

We are also working to ensure that our country can rise to our other great challenges, particularly the climate crisis, rapid technological change and widening inequality.

Additionally, in recognition of a Remain Alliance designed to give pro-European parties the best chance of winning seats, we confirm that we are prepared to stand our candidates aside in key constituencies to fight alongside the Liberal Democrats, Green Party, Plaid Cymru and others.

“We at Renew are very excited about a Remain Alliance and we’re fully committed to making it work. We stood aside in Brecon to support the Lib Dems, and we joined forces with Change UK in the European elections. We have a track record of cooperation and innovative thinking. Today we’re announcing our first ten candidates throughout the UK in anticipation of an Autumn election to signal our willingness to be part of this exciting new approach to politics.

“All of our candidates have pledged to support a Remain Alliance candidate in each constituency, whether they are a Renew candidate or the representative of another Remain-supporting party.

“Whatever happens, we will fight to prevent the Conservatives forcing through a damaging no-deal Brexit on October 31st.

“Renew has been working for two years recruiting and training candidates. We’re ready for the election whenever it comes.”

To find out more, please visit www.renewparty.org.uk/candidates, email [email protected] or call​ the press office on 02032894160.