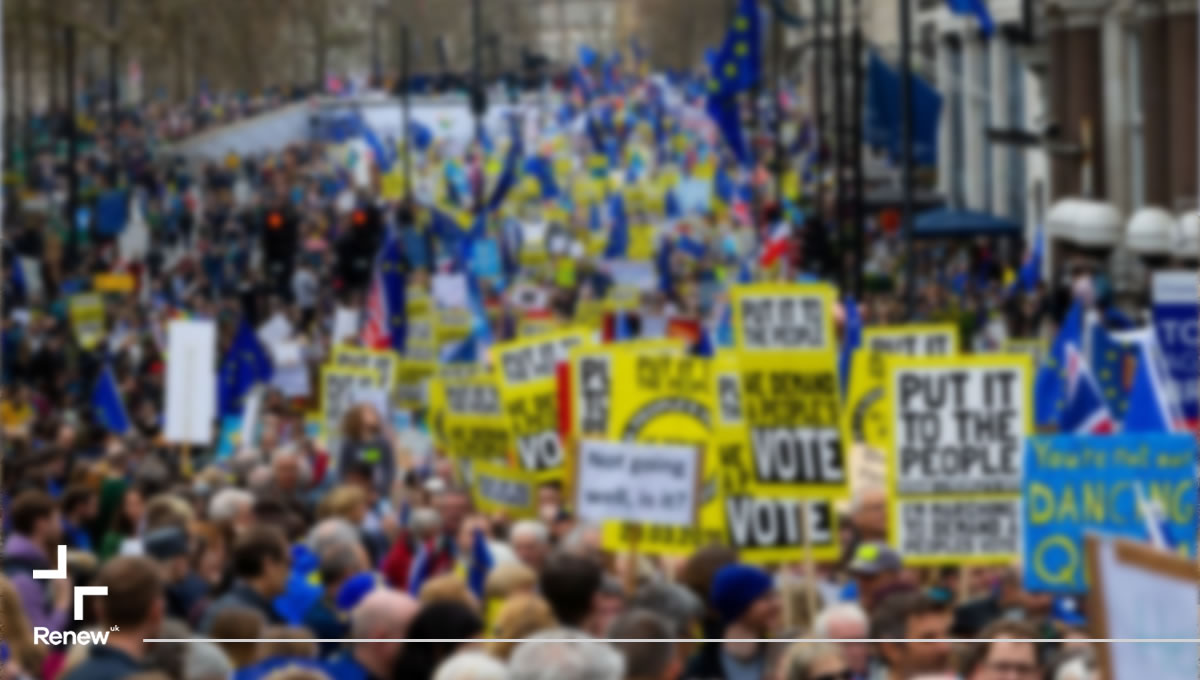 The ‘sensible middle’ are making a comeback. That was Renew member Paul Gerken's overwhelming feeling as he walked amongst the million who took to the streets last Saturday to demand their voices be heard.

The atmosphere was delightfully British. It was all the people I thought had disappeared since June 23rd 2016. The sensible, good-humoured, pragmatic tea-drinkers with dry-witted signs and a burning desire to apologise.

It was the strongest and most visible display that we reject the notion that the British will is being enacted by our government today. We are constantly being told that this Brexit is on behalf of us; our decision, our desire, as one homogenous whole. So we took to the streets in record numbers to say “not in my name, Theresa; ask us again.”

Because that was the point of the march. Although it was undoubtedly Remain in spirit, a Leaver could have proudly joined the march for a second referendum to confirm that Britain is still fully behind Brexit. After all, what do Leavers have to fear, having made their case so well over the past three years? We did not march to remain, we marched to be asked again if this is the Brexit we want, and if not, we have to have an option to remain.

Asking people again, three years later, is not an affront to democracy.

Our democracy has indeed suffered because of this Brexit, but it will not suffer more by having more votes. It suffers because of the framing of democracy as a zero-sum, winner-takes-all competition. It is an endemic problem of our British political institutions. With ‘First-Past-The-Post’ there is no need and no room for compromise; once I have the biggest majority, I no longer need to listen. We won, you lost, get over it. We’ve had a vote, decision made, move on, *repeat without further rational*.

But democracy three years ago does not replace democracy today. People can, will and have the right to change their mind. They also have the right to continue arguing for what they believe in, as long as they have breathe in their lungs. No vote, in a democracy, is ever a mandate to silence the people from expressing their opinions or beliefs in the future. It is a poll, a communication between Governments and the people, to understand what they want to happen. It is fluid, and it can change. It is never a carte-blanche, nor a suicide note, nor a title to remove our rights.

The people of Britain deserve to be asked again if this is the Brexit they want. However, after three years of chaos and disorder, I believe the sensible-middle are ready to wrestle back control, and return Britain back to the global community of nations. We can and should be a committed force for collaboration and contribution with our closest friends and neighbours.

Let us start rebuilding our reputation and standing in the world.