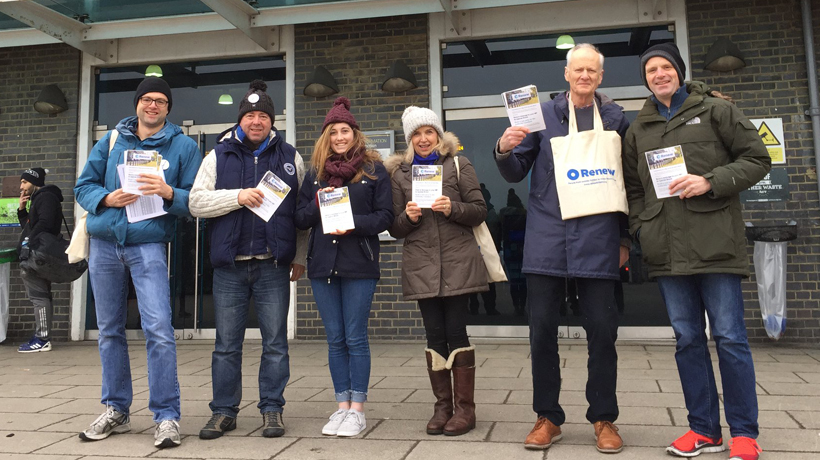 Renew candidates campaigning for council seats in May 3rd local elections are reporting a last minute surge of support among politically homeless voters, especially in the key Conservative stronghold of Wandsworth which voted 75% to remain in the EU referendum. Renew has 16 candidates campaigning for seats on councils in North Tyneside in the North East, and London’s Tower Hamlets, South Ealing, Chiswick. Greenwich and Wandsworth. Candidates are urging people to send a message to government to stop the Brexit process and focus on fixing the many problems that led to it.

Founder Chris Coghlan is standing in Wandsworth, along with 8 other Renew candidates: “We’re noticing much stronger support as the most active anti-Brexit party here. People are angry and turning away from the Conservatives and Labour with their hard Brexit positions. They’re coming to us as a serious and credible alternative.”

The party is appealing for votes from EU nationals, barred from voting in the referendum, as well as many voters disgruntled with established parties. Candidate Caroline Poschl is an economist and Austrian Londoner: “I’ve examined the government’s own forecasts and impact assessments and people are right to worry. Brexit will hollow out the high street. Local jobs and amenities will be lost but the main effect will be a creeping one – our local businesses, services and incomes will be hampered for decades.”

Renew is also calling for more central government funding for councils struggling to deliver basic services after eight years of Conservative cutbacks. Some local budgets have been slashed by as much as 40%. Renew’s chief of operations and former policeman David Britten is standing in the Wandsworth ward of St Mary’s: “The discontent and anger caused by the cuts is palpable. Promises to build more affordable housing have not been kept. Crime is rising; health care and social services are in crisis. When we explain our vision of how politics could be, delivered by people of integrity from outside the system putting communities first, they see we’re the only viable option.”

On the doorstep, Renew candidates are finding voters eager to turn their backs on the ineffectual status quo of left-right political extremes. The party’s brand of open, inclusive, trustworthy politics is resonating with local voters across the UK. Alex Jacob is one of two Renew candidates in North Tyneside: “We’re getting a lot of support from local people concerned that British politics has headed to the extremes and is ignoring the vast majority of people who naturally prefer a centre-ground, pragmatic party.”

Background: Renew is a registered political party established in Autumn 2017 on a campaign to Rethink Brexit, Renew Britain. Building on mass disaffection with political parties, Renew has enjoyed overwhelming support for its centrist agenda to address inequality and create a new vision for modern Britain. Renew aims to deploy 650 credible candidates for any future election and will campaign to remain in the EU in any vote on the final deal. For further information: see www.renewbritain.org or email Party Principal and Head of Communications Sandra Khadhouri [email protected]  0203 239 1692 or 07968 862195.