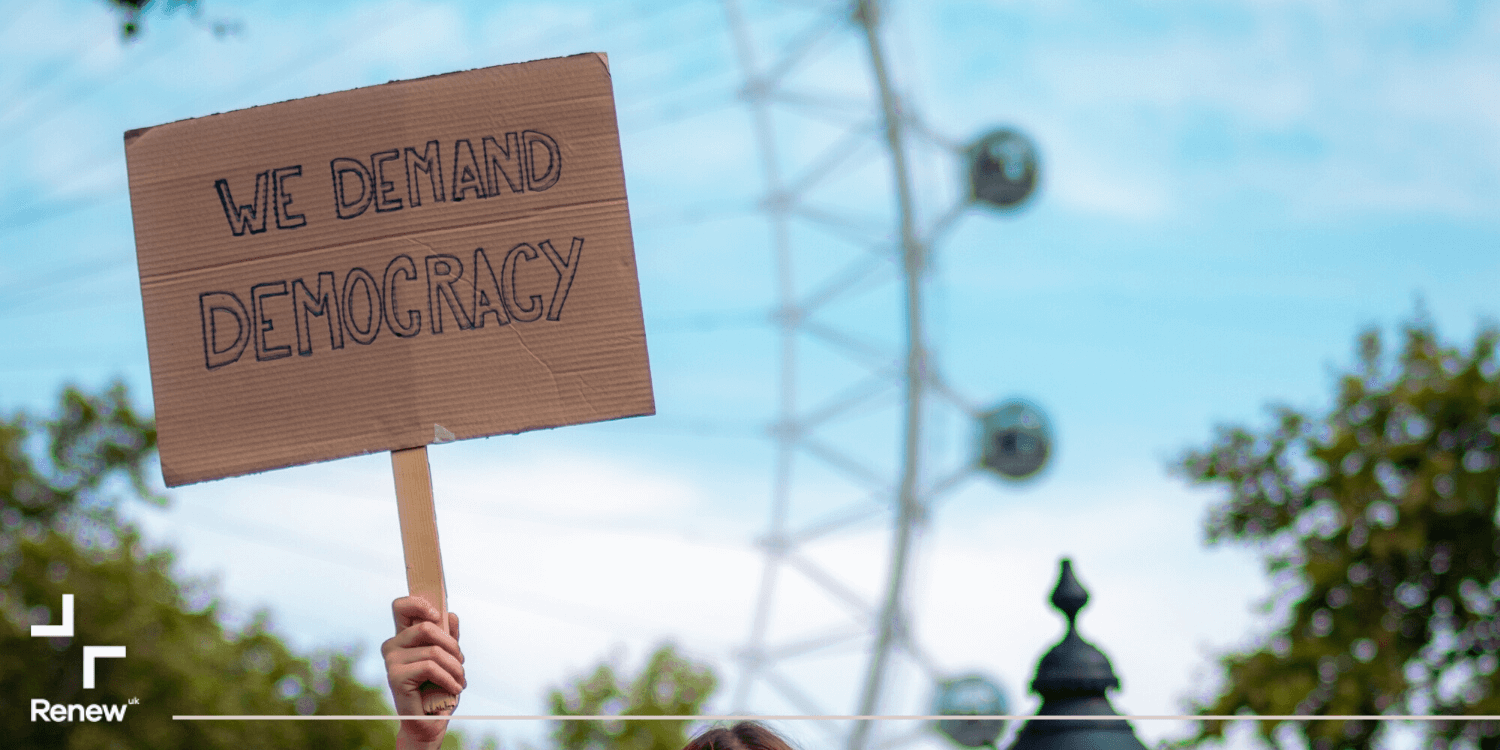 Has democracy died in the United Kingdom?

Renew's Terrance Knot investigates the demise of democracy in the UK.

The term "democracy" first appeared in ancient Greek political and philosophical thought in the city-state of Athens during classical antiquity. The word comes from demos, "common people" and kratos, "strength". Led by Cleisthenes, Athenians established what is generally considered the first democracy in 508–507 BC.

Since then, many countries have claimed to be democracies, but none more so than the United Kingdom. Indeed those who still profess to be British, and who identify, more or less, as English, Scottish, Irish or Welsh, have often taken pride in a supra-national United Kingdom: renowned worldwide for its sense of honesty, fairness and democratic decision making and rule, although in some cases harshly, but with “tough love” over countries comprising a quarter of the globe.

Nowhere was the sense of a thriving democracy more portrayed than in the coming together to support the “mother country” in the two World Wars, with thousands laying down their lives, for a concept founded on a common ideal, principle, or faith. Meanwhile one of the modern bodies of democracy was - at the same time as women got the vote - a health system, created for all. We also battled with the consequences of the national sale of assets to fund the defence of democracy – still living, believe it or not, with the abolition of the Slave Trade. Many will find it hard to come to terms with the fact that, although the UK connection with this trade officially happened in 1833-1840, throughout the British Empire, we were still paying off the money borrowed for the Slave Abolition Act in 2015!

On a lesser scale, the UK took steps to abolish child labour, to improve schooling (although the battle between so-called private and state-run schooling continues to this day) and workers were striking and marching against poverty and unemployment (Yarrow march 1936 et al.). On the back of this poverty and the feeling of frustration about the condition of the country, trade unions gained in power, especially in the fields of mining, textiles and transportation. An even-minded person would perhaps admit that the people of the country were fighting back in the only way they knew how: by denying their labour. Indeed they were “voting with their feet”, a democratic exercise of their human rights.

Before readers assume that this is a rant about human rights, let me assure you that it is not: it is simply a portrayal of some of the major steps along the way, as the British people, led by the English in 1215, gradually threw off the yoke imposed by royalty, later the “robber barons” and finally the affluent upper classes. This development of the “rights of man” (Thomas Paine in 1791, published a book, in which he linked the French Revolution with the idea that popular political revolution is permissible “when a government does not safeguard the natural rights of its people”) was a gradual process, over several centuries, but sped up as modern communications allowed ideas to be spread over the internet and similar systems.

Meanwhile the other major component countries, Scotland, Wales and Ireland, in no particular order, also showed a strong and understandable tendency to rebel and "do their own thing".

It is of note that, impoverished though she was after the Second World War, Britain (readers will forgive if I shorten Great Britain and Northern Ireland to “Britain, or the UK), played a major role, in international deliberations, post WW2. This applied, amongst other activities, to help to rebuild Europe, much of which was in ruins, both financially and in terms of assets and infrastructure. Of course, anyone with a grasp of basic history knows that this included the initial building blocks of a Free Trade Area, or Market, which grew in time, into the European Union.

This one short paragraph above disguises an enormous development, which in time has proved enormously popular, no matter how some may try to gainsay it, encompassing an amazing mixture of long-term civilisations, including a rather unsteady Greece, the so-called cradle of democracy, and many younger and smaller countries, some of which did not exist, at the end of WW2.

Again, despite sniping and protestations to the contrary, this union, as opposed to the British one, developed a democratic system of elected members from each country, a council and a mechanism for enabling each countries’ own elected senior ministers to exercise the right to contribute to - and vote for – its further development. It would be a surprise only to the most naïve, that this development, enabling seventy-five years of relative peace in Europe, has not been without its problems along the way, but try to point to a similar union which has not? Indeed compare the UK’s chequered history of sometimes vicious infighting between Irish, Scots, Welsh and English. Compare also, the “Land of the Free”, in which the American Confederacy fought against its Southern counterpart; and some in Virginia still quarrel to this day!

So, while the Continent of Europe was rebuilding itself, with initial whole-hearted input from the British, what of our own “Home of Democracy”?

We have only to say the word “Brexit”, to recall immediately the appalling schism that has developed in our union, and the negative effect this is having on our immediate international neighbours. One has only to take advantage of the Freedom of Movement that we have enjoyed for the last seventy-five years, to realise the shock and horror, the incredulity and derision, the snigger behind the hand that confronts the British, as they travel, holiday, or read the international press.

To say that we have become an international laughing stock, as the present Tory government wrangles about percentage points of approval or disapproval, is an understatement.

Yet, this wrangle, voiced in every newspaper, TV show and published article, both pre and during the pandemic, seem to make little difference to the small yet vocal group of alt-right politicians, bent on wresting political and financial advantage and lining their own pockets and those of their friends and cronies. Never mind that current polling indicates some 55-65% of the population of the UK would prefer to cancel Brexit. (Professor John Curtice, political guru, asserts that many of the young, who were unable to vote in 2016, are now “twice as likely to vote Remain and puts the Leavers on only 44-47%).

But here is the crux of the matter. Under the current “first past the post” (FPTP) electoral system, the public vote of 2016 overturned the referendum of 1975 and since then, the 2019 election, by what some regard as devious means, persuaded the great British public to return the Tories with a majority of 80 members in Parliament. This completely ignored the fact that a “proportional representation” (PR) electoral system would return a very, very different result. Yet neither the Tories, nor indeed the Labour Party, would vote for such a change, as their power base depends upon the status quo.

It does not help that the major party, in favour of PR, the Liberal Democrats, were completely out-manoeuvred and beaten, in the 2019 election: hardly a cause for confidence in the future. Other smaller parties also exist, such as the relatively new and centre of the road Renew Party, and the Green party, but again, under FPTP, the “big beasts” of politics are reluctant to switch loyalty, to more centrist policies, which lack a high profile. Except by honest and reasonable people, of which there seem to be fewer and fewer these days, most support tends to go to the headline catching extremists, rather than the outmoded concept that “the government of the people should be by the people, for the people”!

In that respect, the writer and many others, both friends and acquaintances, are amazed at the supine attitude of the average “Brit in the Streets”, compared with, for example, the French and many other significant countries in Europe, who are not slow to voice their views on poor government. Apart from two major marches, which saw not a single person arrested, the British public seems to have rolled on its back to have its tummy tickled! People outside the UK regard this as quite extraordinary and quite at odds with the battles and indeed a Civil War, fought for democratic freedom.

Meanwhile, the UK’s current government takes full example of the impact of the pandemic, to cement its grip on power and to railroad through policies and stratagems, that cannot be queried or fought on the floor of the House of Commons. It might be said that the Tories have a stranglehold on the throat of Democracy.

One other point before I close. From one who lives most of the time now, in Mainland Europe, amongst a thriving, educated, motivated group of 1.3 million British citizens, I must note that two aspects of life are paramount. We view with mounting horror, the downward slide of democratic freedoms in our mother countries of the union; and we feel embarrassed at the pity we encounter, amongst our fellow Europeans.

Is Democracy dead in the United Kingdom? Not yet, maybe, but on its last gasp.