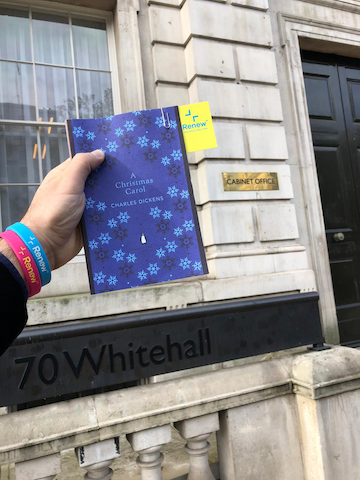 We sent a copy of A Christmas Carol by Charles Dickens to the Cabinet Office for ministers to read - they clearly need reminding!

“Last week our government made the despicable decision to vote against giving disadvantaged children food over the half-term and Christmas holidays. This is demonstrably not a decision that the majority of the country supports.

“The fact that such a decision could be taken highlights the very real problems with the political system in the UK – problems that affect the everyday lives of millions of people in this country.

“MPs were whipped into voting against the free school meals proposal brought forward by the Labour Party. The individuals concerned may have wanted to support the proposal, but they knew to do so would limit their career in the Tory Party. These MPs put their own self-interest and the interests of their Party ahead of the interests of the country and the people they are supposed to represent. They should be ashamed of themselves and they should never be allowed to call themselves the representatives of the people again.

“Renew is calling for an urgent removal of the Whip system to prevent such outrageous and cruel decisions from being possible in the future. We demand a political system where elected officials have the integrity to represent the views and needs of their constituents; a political system where MPs are free from fear or threats from a central party machinery that controls them and consequently the country.”