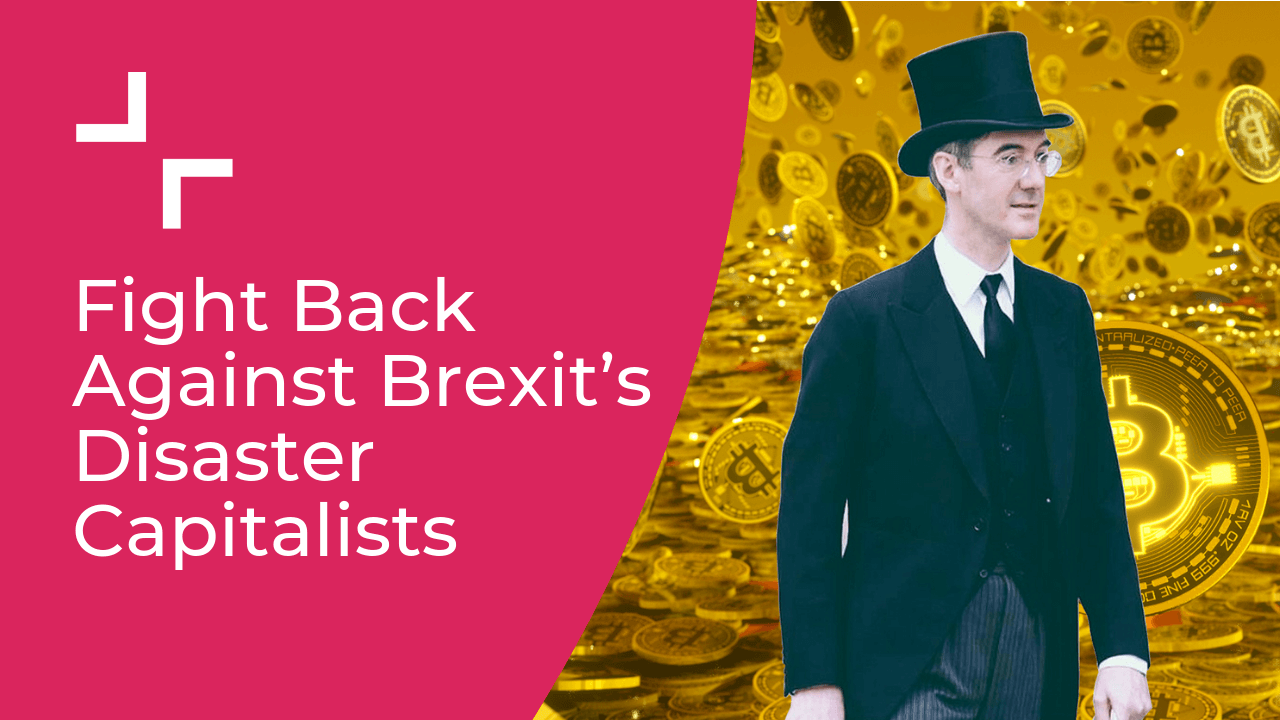 Fight Back Against Brexit’s Disaster Capitalists

We take a look at the worrying ideas behind Brexit’s wealthiest backers.

In 1997, Lord Rees-Mogg, father of Jacob, helped write a book called The Sovereign Individual. In it, he made a number of bold predictions about the future. One of those was the probable rise of a “new digital form of money” that could bypass borders and be used by traders in a digital online market.

It seems the man that many mocked as ‘Mystic Mogg’ might have been on to something. But it isn’t just his anticipation of cryptocurrency that is of interest to us today.

To fully understand his son’s passion for Brexit, we need to understand something else about Lord Rees-Mogg’s writings.

For in The Sovereign Individual, Rees-Mogg advanced a theory that has come to be known as ‘disaster capitalism’: the belief that, in times of great crisis and instability, there is ample opportunity for shrewd investors to gain a fortune. This theory built on decades of increasingly radical thought on the Right, which in turn took inspiration from Nathan Rothschild’s belief that “the best time to buy is when blood is running in the streets”.

Given that Jacob Rees-Mogg has publicly stated that his father is his greatest political influence, it is time to seriously consider the possibility that he may be attempting to engineer a no deal Brexit in order to take advantage of niche investment opportunities that could arise from the ensuing chaos.

Consider, for example, The Guardian’s report in November 2018 that Somerset Capital, Jacob Rees-Mogg’s private investment company registered in offshore tax havens, opened two funds for investors in Ireland just months after their own prospectus warned of considerable risks to its stability as a result of Brexit. Never mind Rees-Mogg’s public denials of that possibility; the company’s actions spoke louder than his words.

Meanwhile, the billionaire Crispin Odey has bragged about making millions off of Sterling’s recurrent slumps in the aftermath of the Brexit vote. Investor Chris Rokos also profited heavily from the market chaos unleashed by the Brexit vote back in 2016.

Elsewhere, similar trends have been identified. Writer Naomi Klein, identifying how prices of oil, gas, homeland security and defence stocks tend to rise in moments of crisis, explained in her 2007 book The Shock Doctrine how the tenets of disaster capitalism had begun to impact American political decision-making. The War on Terror, along with the response to Hurricane Katrina in 2005, showed how private interests could capitalise on death and disaster affecting ordinary people around the world. Today, as pawns in Donald Trump’s game of untruth and disorder, the people of the world are yet again vulnerable to manipulation by a shark-like investor class intent on sowing seeds of discord in areas of financial opportunity.

We must wake up and recognise that certain individuals thrive off of crises. The increasingly irrational calls for a no deal Brexit from wings of the Conservative party and UKIP may well be motivated by a desire among some to profit off of the inevitable chaos that such an event will cause. It would be interesting to see exactly where high-profile backers of the ‘no deal’ route have been investing their money recently.

To the disaster capitalists, the possibility that normal people with debilitating illnesses will not be able to receive medicines of European origin after March is by the by - what matters is their interests and those of their investors. If we allow this hostile coup to take place, we will be submitting to the plundering wills of pirates who do not care about the good of the nation or the health of its people.

It is essential that these people become known for what they are: vultures who would eat the food from your table and who are symptoms of rot deep within our political system. Only with a new force of ordinary people who reject these shady interests can we target this increasingly worrying development in the Brexit process, returning the destiny of this country to its people - not some dodgy hedge fund managers.