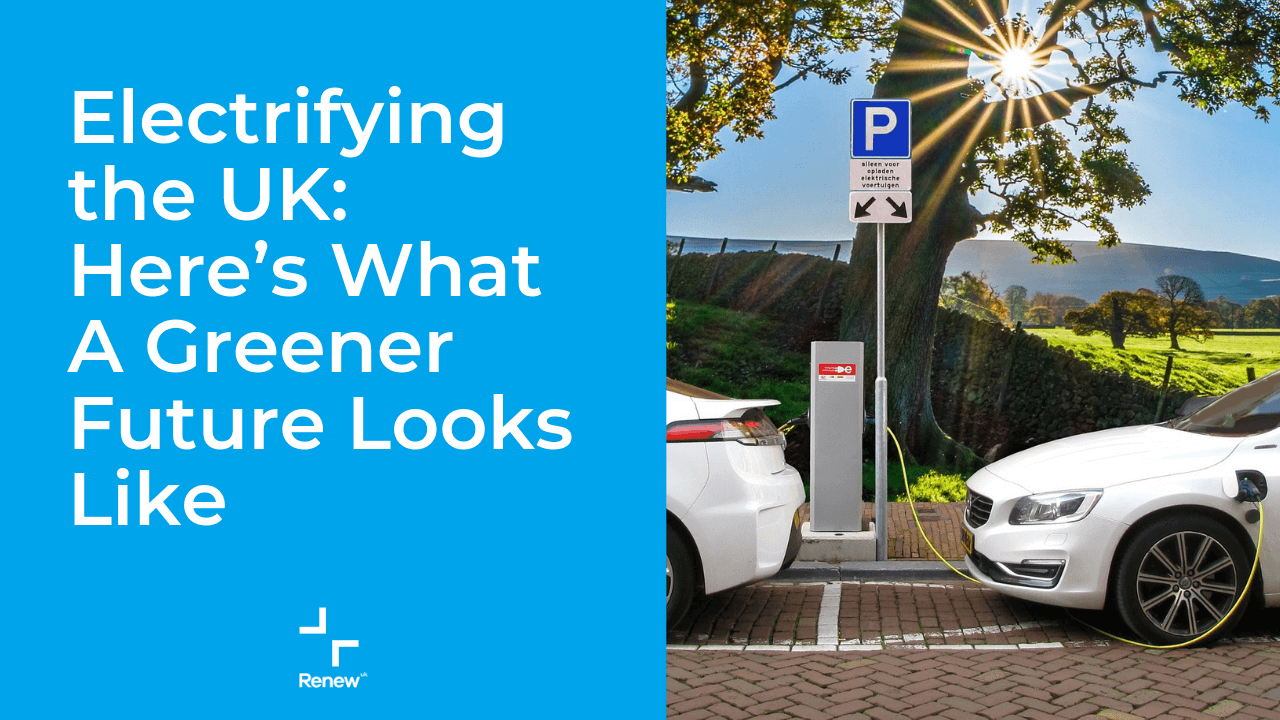 Electrifying the UK: Here’s What A Greener Future Looks Like

Here we explore the future of electric cars in the UK and how to make this revolution work.

The UK government has pledged to halve the sale of non-electric vehicles by 2030 and eliminate them altogether by 2040. So it’s time to think about how we can make this work for Britain.

Sales of electric vehicles (EVs) have grown sharply over recent years, reaching a record high in August 2018 when they accounted for one in every 12 car sales. However, EVs still account for a very small proportion of total car ownership - there are currently around 182,000 plug-in cars on the roads in the UK compared with the 37.5m vehicles registered for use on UK roads in 2017.

A lack of infrastructure is the most significant barrier to further uptake. There are around 17,000 public charging points in the UK at present, with around 100,000 domestic points. According to planning experts, existing infrastructure will be unable to cope with the predicted surge in numbers of electric vehicles. The current approach to rolling out infrastructure is fragmented, and there has been little progress in the way of an overarching plan of how preparatory infrastructure will work together. For that reason, we should commit to the speedy installation of charging points and and budget for it as a priority. In July last year, the government sought a mandate to roll out ‘hundreds or thousands’ of new charging points outside homes, offices and on residential streets in a bid to encourage the uptake of electric vehicles in the UK, but this process needs to happen much more quickly if we are to reach our climate goals.

The national grid must also be able to cope with large numbers of people charging their vehicles simultaneously. Problems are most likely to arise in areas of high population density, where cabling upgrades and substation reinforcement could potentially be used to double capacity.

The switch to EVs from conventional vehicles will doubtless bring a number of significant benefits to both the UK environment and economy. According to the National Infrastructure Commission, battery powered cars, even those that run off electricity derived from conventional sources, could save the UK £8bn per year by 2030 because EVs are substantially more energy efficient than petrol or diesel-powered cars. It is estimated that electrification reduces energy usage by up to 50%. Removing reliance on fossil fuels for road transport will also help improve the UK’s energy security by reducing dependency on oil-producing nations. The UK currently has a £5bn trade deficit in conventional vehicles, but rapid uptake of EVs opens the possibility for the UK to become a net vehicle exporter.

Another incentive for electrifying road transport is the reduction in air pollution, which is currently responsible for around 40,000 deaths in the UK per year, 9000 of which are in London. An Oxford University report found that pollution from road traffic is estimated to cost the NHS around £6bn in health damages per year, with diesel vehicles being the most damaging. Electric hybrid vehicles are up to 20 times less damaging to health than diesel vehicles.

Though upgrades to charging and grid infrastructure will cost a projected £1bn per year by 2022, the majority of this will be private expenditure. However, government policy and investment must go further in supporting this revolution.

Firstly, a strong domestic market is crucial if vehicle uptake is to justify high levels of private investment. Hence the government’s pledge to end sales of non-EVs by 2040, though we would consider moving this forward to 2030 to accelerate this process. Norway and India have already announced bans on conventional vehicles beginning in 2025 and 2030 respectively. Investing further in battery technology will help ensure the UK maintains its global lead in EV design, though investment in production is equally important. Emphasis should be placed on fleet vehicles in particular, which make up more than half of all vehicle sales in the UK. Tax incentives, emissions standards, production targets as well as improvements to charging infrastructure will be crucial in supporting the development of large private EV fleets.

The stage is set for a bold force to transform the way we travel up and down the UK. As a group with no vested interests, we think Renew is best placed to become the revolutionaries to spearhead this green future.