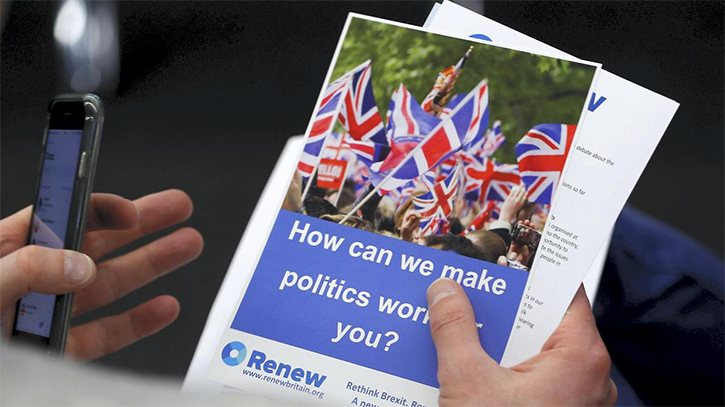 Call to Arms: British expats – your country needs you!

Britain is in serious trouble, with all the established political parties fighting for their own agendas and survival instead of the best interest of the country. Brexit is a train crash waiting to happen and Renew is urging a rethink to prevent this calamity.

Renew is a new party that aims to reverse Brexit and restore our influential position in Europe, allowing us to focus on what really matters in the UK. We know the Brexit vote was a symptom of deeper discontent with the way things are run in Britain. It was a kick against the establishment, against inequality and austerity, against a system that hasn’t worked for everyone. It was a protest by people who feel neglected and whose lives have not improved. Renew is building policies to address their grievances so people realise there’s a better way to solve their problems than Brexit.

Leaving the EU will hurt everyone – including you as British expats. Since the drop in sterling, your spending power has gone down and your future is uncertain as your rights are being traded away in negotiations. After Brexit you may face extra taxes and a loss of free health care and you’ll lose freedom of movement rights across the rest of the EU along with 65 million other Brits. Renew will safeguard your rights by persuading people – politicians and
citizens alike – that we must stop Brexit for the good of us all.

The tide is turning, now we know more what Brexit really means. There’s still time to stop this ruinous path if we all act now. We’re lobbying for a ‘people’s vote’ on the final EU deal, along with other campaigning groups. This time, let’s do it right. We’ll push for you to have vote as a British national, no matter how long you’ve lived abroad.

In the meantime, you can do four things to help us help you:

Renew will fight your corner but we need everyone to play their part now while there’s still time to change our future.
Find out more at www.renewbritain.org or email us at [email protected]
For media inquiries only, email [email protected] or call +44 7968 862195