This week we have a huge amount to share and discuss, so make a cup of tea, get comfy and settle in...

Statement on Corbyn and the EHRC report

On Thursday Renew issued its comment on the EHRC Report. The issue goes to the heart of Renew's key proposition, that of boosting participation, inclusion, openness and bringing more and better people into grassroots political action to improve the integrity and the quality of our representatives.

'The EHRC report has confirmed what has been clear for many years; that a culture of anti Semitism survives and thrives in the Labour movement.
Keir Starmer's suspension of former leader Jeremy Corbyn is a signal that Labour intends to begin addressing the issue in earnest, but it remains, along with brutal factionalism and bullying, an endemic feature of politics on the far left.
Successive Labour leaders have attempted to deny the problem or sweep it under the carpet, but in recent years the anti Semitic wing of the party has been given free reign, to the severe detriment of the Jewish community, the party itself and the UK's political culture as a whole.
Both Labour and the Conservatives have, for far too long, been comfortable homes for those with Antisemitic and Islamophobic views as well as a range of other corrosive and unfit behaviours and attitudes.
The case for root and branch reform in Westminster is now painfully clear; our representatives in Parliament should reflect the best UK values, not the worst.
Renew calls for more openness and participation in politics at all levels, to prevent this toxic culture from persisting into future generations; we have to be better than this.'

Next Thursday is November 5th, a special date in the UK calendar and a day where we reflect on our Parliament and on the relationship between the Government and the governed.
We are choosing this night to launch our campaign for change, to reform and renew our Parliament and our broken political system.
Using similar techniques to the excellent 'Led By Donkeys' campaigns of recent years, our campaign will be a positive and inspirational call for reform and renewal of our Parliament and our political system, encouraging political participation across the spectrum, from all backgrounds, with the Renew Party as the open platform for change. 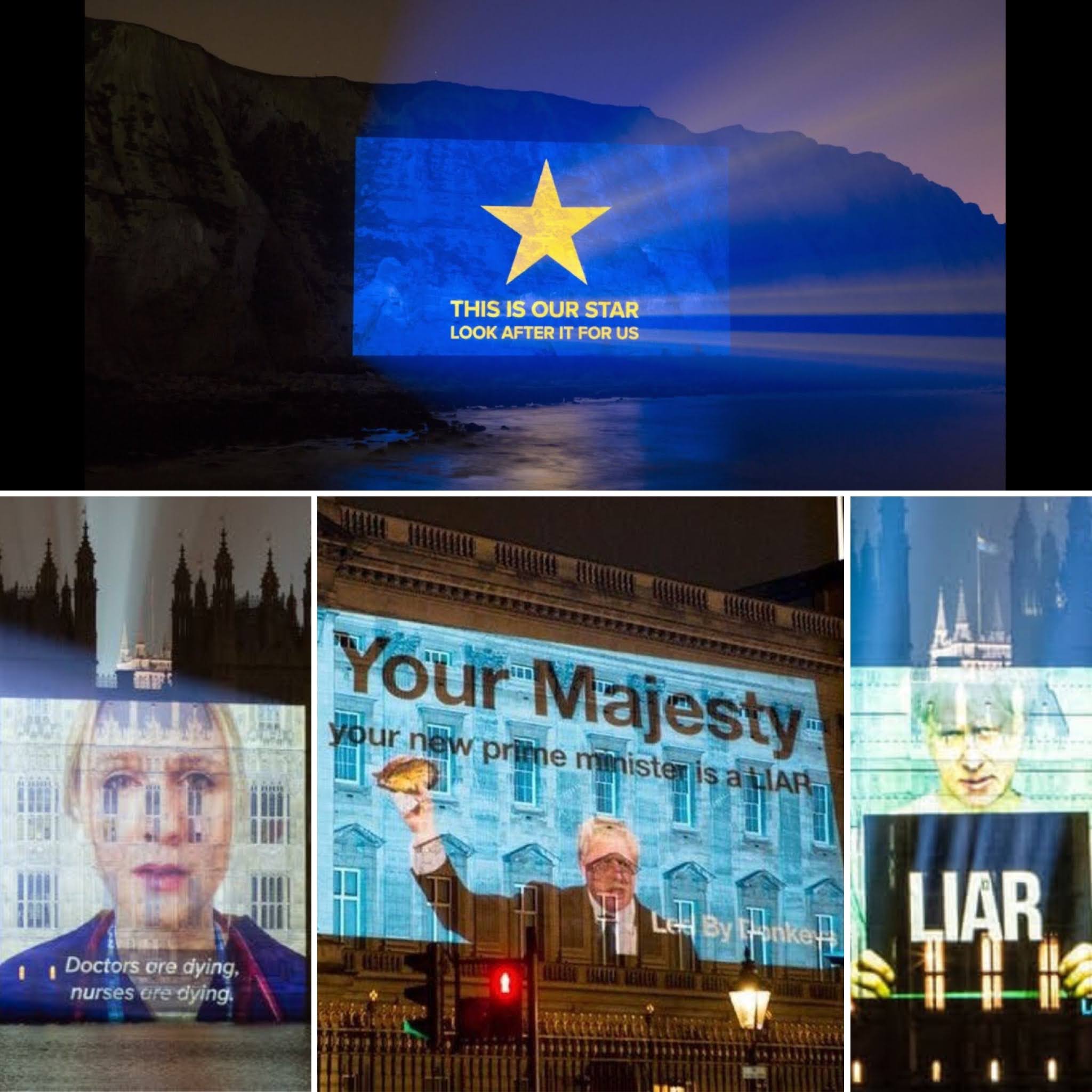 Some powerful examples from @bydonkeys

Without giving too much away, our campaign will be media-focused, but also aimed at bringing new people into the party, as supporters, activists, campaigners and especially, as candidates.

We will kick off with a big event at a major political landmark on November 5th and, with your help, continue the campaign from there.

To help us get the project underway, please contribute any amount to Renew by clicking here.

All donations received in the next 4 weeks will go directly into the project.

We need your help!

Renew's meals for schoolchildren at Christmas

This week Renew launched its campaign to help feed the neediest children at Christmas on GoFundMe with a trip to Downing Street to give the PM a copy of Charles Dickens' 'A Christmas Carol'.

We are partnering with FareShare, which is the organisation Marcus Rashford has partnered with, and have kicked off with a commitment to provide 322 meals, one for each MP that voted against the bill to extend free school meals over Christmas.

Please help us out with a donation here - https://www.gofundme.com/f/feeding-the-nations-most-disadvantaged-children

Over the last 28 days, the Conservatives have dominated the digital conversation on Facebook, with over 400,000 interactions surrounding the posts on their main page alone. 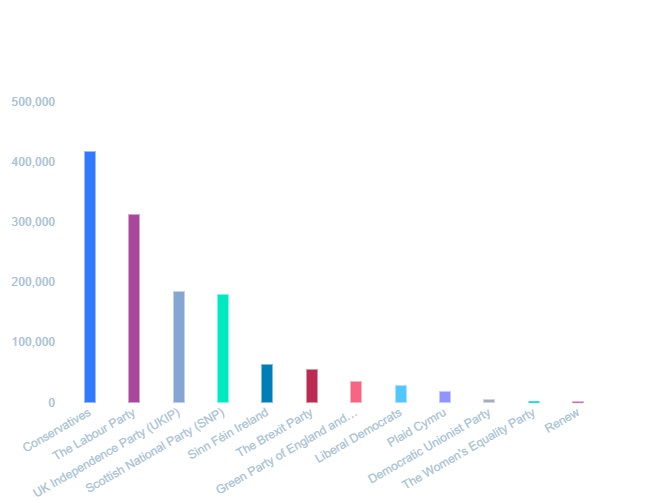 The party has also seen the largest growth in its Facebook following, picking up over a thousand new fans, rivalled only by Sinn Fein.

The most interacted with post, however, came from the Labour Party: 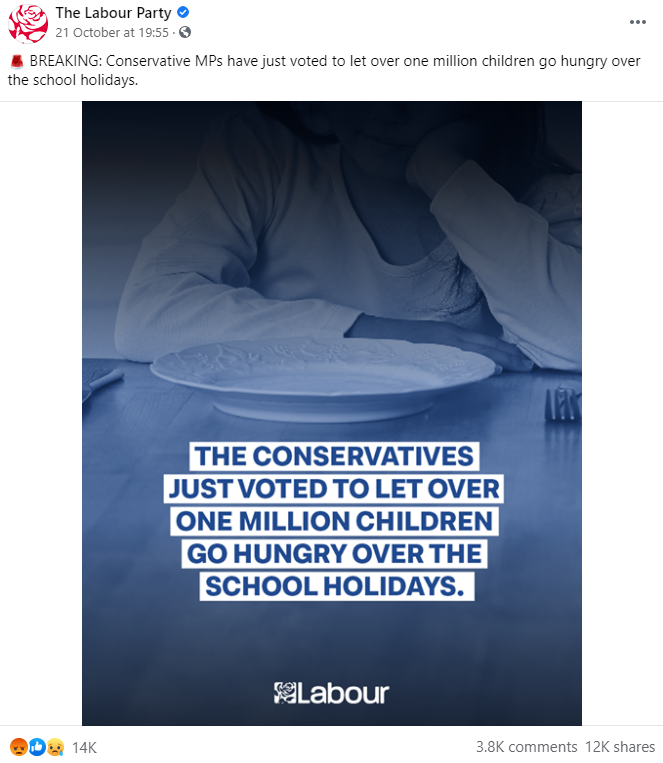 Notably, Labour had lost several thousand people from its audience over the course of October, only seeing a recovery to its baseline between the 18th and 27th of the month.

Over the last week, 111,000 tweets have been generated featuring the tag #FreeSchoolMeals. The distribution of the conversation across the country provides an interesting view of both platform use and the national mood: 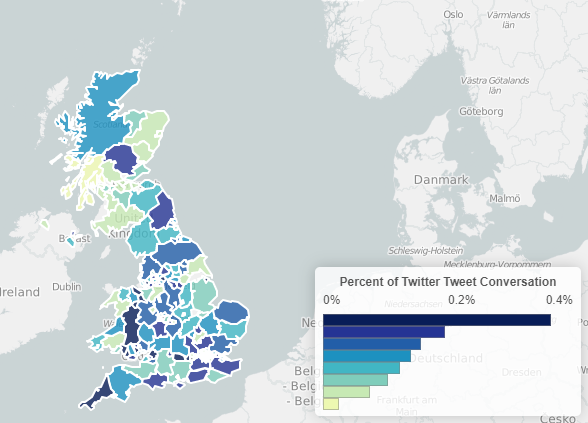 To set this in some context, 109,145,700 tweets have been generated in the UK over the same period. Only 1% of all this content features hashtags and keywords related to school meals, despite the national media coverage. The petition, launched by Marcus Rashford, has received just over one million signatures.

The data on the whole shows that there is more to our national discourse than the trend cycles of social media and stories dominating the headlines show and provides us some valuable insight into why the government may be less immediately responsive to events than we may expect.

Renew has launched a new, national survey, using our very own website dedicated to finding out what the country really thinks. We believe it is essential to gain a better understanding of what really matters to people up and down Britain so we can deliver meaningful reform.

We would very much appreciate it if you could share this survey with your friends, family, colleagues and contacts on and offline to help us make sure everyone's voice is heard politically. It only takes five minutes but it could mean we all end up with a better Parliament come 2024.

You can find the survey at https://we-are.uk/wearebritain/