In a week where much of the country took to the parks, beaches and the occasional savage street party, it appears that the lockdown is now largely over. We must now hope that the 'R' remains below 1 and, somehow, drops at the same time as society re-opens in earnest.

In yet another example of the government's 'in-out-hokey-cokey' approach, the new rules will be lending themselves to a characteristically Johnsonian flavour of anarchic confusion. Pub landlords will be responsible for distancing groups of 'Super Saturday' drinkers, and failures to do so effectively can lead to, 'serious fines and even imprisonment'. Whilst pubs can open outdoor areas, including pavements and (yaay!) car-parks, in the event of sudden rain, pubs will not be allowed to admit customers inside the premises unless social distancing can be maintained. With the vision, wisdom and foresight we have become accustomed to enjoying, our government's plans are openly contingent upon the famously dry and reliable British summer.

Further, pub toilets must be cleaned with 'increasing frequency', which, judging by my distant recollection of the state of most pub toilets, can be interpreted as 'any frequency at all'. Perhaps Johnson could go one further and demand that toilet seats are re-hinged and toilet door locks fixed... we can but dream.

All of this, of course, would be far more welcome if we had a working app or an adequately functioning test and trace system. At PMQs on Wednesday the PM boasted that 87,000 people had been contacted by 25,000 newly recruited contact tracers within two weeks. Those numbers actually equate to 3.48 contacts made per tracer, or one person contacted per tracer every four days. If this is world-beating, we should probably ask which planet we are competing against, Alderaan, perhaps? Further, according to a friend of Renew, currently working as a contact tracer, the system is a farce. Some lowlights:

Fact fans: The test and trace contract was awarded to Conservative Party donors SERCO, who will earn fees of up to £90m for this service.

“Systemic racism is a global issue,” she adds. “The tactics used by the police in America, kneeling on George Floyd’s neck, that was learnt from seminars with Israeli secret services.” (A spokesperson for the Israeli police has denied this, stating that “there is no tactic or protocol that calls to put pressure on the neck or airway”.)

Starmer has been praised for his swift and decisive action, in stark contrast with his predecessor, whose vacillations on anti-semitism did so much to harm Labour's reputation. One has to question RLB's wisdom in publicly sharing the (since retracted) political thoughts of that most revered oracle, the tv and film actor, but to be fired for it may be considered an overreaction. The fairly long and mostly tedious interview covered many topics and, as quoted, the specific accusation is rebutted in the text.

Whilst many of us will be glad to see the back of RLB, Starmer appears to have set the bar for dismissal rather low and sets a dangerous precedent. The predictable backlash from Labour's intractable hard left is underway. Watch this space.

Lastly, there is hope that a coronavirus vaccine developed at Oxford University may be viable in the coming months. Let's keep our hopes up; perhaps Britain hasn't had enough of experts after all.

Black Lives Matter: Renew member and councillor for Morecambe, John Bates, considers how we can examine the truths of history, and argues why we should.

Members, as usual, have exclusive access to the full Digital Democracy platform. If you've got a suggestion, submit it! 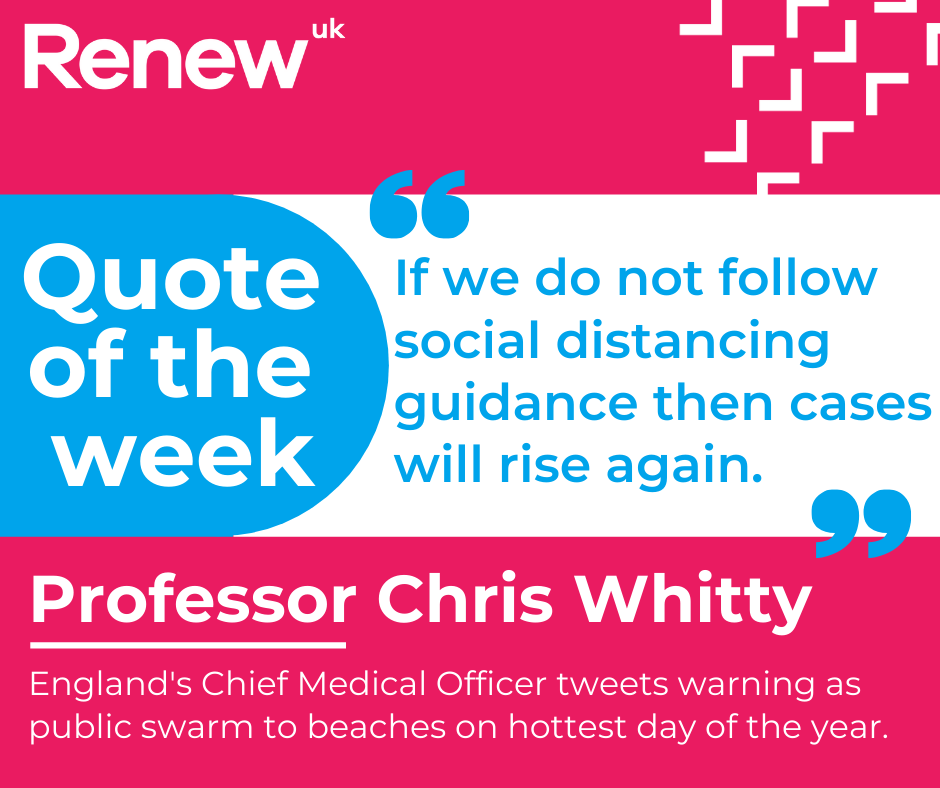