As the long winter comes to an end, as vaccines start to take effect and as the tantalising prospect of a return to normal life edges closer, we can begin to allow ourselves a glimmer of hope. Happily, the NHS will be the vehicle that leads us out of a very dark period that has made us grateful for what we have, and to appreciate all that we have lost. We can look forward to former chores now turned forbidden joys, such as haircuts and going to the gym. Park picnics will enjoy a resurgence and we may get to enjoy the international spectacle of the European Football Championship, which could even have (gasp) real spectators when the final is held at Wembley on Sunday 11th July. For non-sports fans, we might reasonably look forward to outdoor cinema or theatre in the park. The prospects are exhilarating.

And yet, as we are on the cusp of this happy national moment, our political divisions show no sign of abating, awkwardly inserting themselves even into such universal shared interests as vaccinations and the path out of lockdown. Earlier this week a mini-furore blew up in the media with the prospect of the use of vaccine passports/certificates by private companies and the PM's apparent u-turn on whether this might be considered 'unethical'. #VaccinePassports began trending on Twitter, and aggressively passionate people on both sides of the debate started weighing in with a gloomily predictable partizan approach. Civil liberties campaign groups presented the idea as a deliberate attack on the marginalised, whilst many ordinary people saw the issue in very different terms. The exchange below is fairly typical. 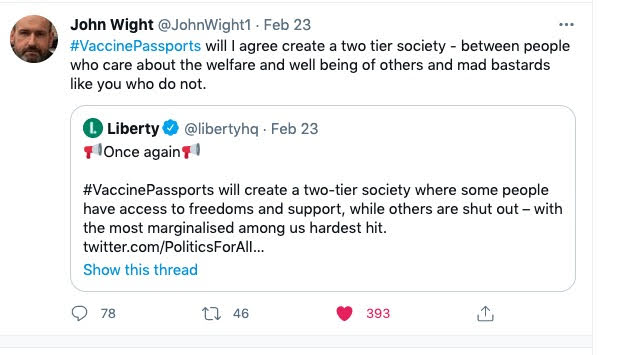 The question for us is, in a political environment where the tendency to extremes and polarisation is still so evident, how can Renew cut through the noise and make a positive impact? One approach is, to employ the useful but overused phrase, being 'the adults in the room', resisting the draw of extreme and provocative positions and treating the electorate with respect. As in all of these heated debates the issue is around balancing the interests of the country as a whole. This means treating society as a society and not as a proliferating set of distinct identity groups, all competing against one another and railing against the (largely illusory) centre.

With regards to vaccine passports, everyone would like to know that their loved ones can go to a theatre or sit on a plane and not be put at risk. Similarly, public and private organisations big and small need to do everything they can to keep their staff and customers safe. How can the interests of public health be achieved whilst maintaining civil liberties?

A realistic position would be to look at how this has worked in other countries, (Israel being the most obvious example) and see if it might be improved. We also have to evaluate the situation practically. If the world is to open up to travel and trade it is inevitable that some countries will demand evidence that travellers are not high-risk. There are already 17 countries that are implementing vaccination requirements for inbound travel and that number is likely to grow. With regards to domestic events, if theatres, stadia and event venues asked for either proof of vaccination, proof of exemption (for those with medical conditions) or that customers take a 15 minute lateral flow test before entry, might that be acceptable to both those concerned with public health and also those concerned the civil liberties? Perhaps, but you certainly wouldn't have thought so reading the papers or looking at social media in the last few days.

The other striking thing about the vaccine passport issue is that it's another occurrence of unusual political alliances. In this case, we have strident activist groups aggressively characterising vaccine certificates not as a necessary part of a colossal public health effort, but as an insidious tool of deliberate repression. These people are joined by far-right libertarians, anti-vaxxers and conspiracists who think Covid is a lie and that wearing a mask is an infringement on human liberty. What does it mean when the far-left and the far-right agree on something? It doesn't take the greatest leap of the imagination to remember a similar moment, when Conservative, Telegraph-reading retirees of the Home Counties found common ground with the militant left on the topic of Brexit. Both managed to arrive at the conclusion that leaving the EU was definitely a good idea, albeit via vastly different and wildly contorted routes of thought. They were joined by Vladimir Putin, the only major world leader to offer (albeit tongue-in-cheek) congratulations to the UK in 2016. Strange bedfellows indeed.

We at Renew make up a different constituency, those who are no longer prepared to prop-up the old political divisions or the new ones, but instead appeal to people across the board, not only former Labour and LibDem supporters, but former Conservatives too. In fact, some of our assumptions about UK voting behaviour in recent years might be flawed. The British Election Study showed that, across three elections from 2010-17 almost half UK electorate (49%) didn’t vote for same party, and that the 2015 and 2017 general elections saw highest levels of voter volatility in modern times.

Further, the YouGov study illustrated below throws up a reminder that vast numbers of Labour and LibDem voters (35% and 32% respectively) voted to leave and that 39% of Conservatives voted to remain in the 2016 referendum (not to mention the baffling 5% of UKIP remainers). 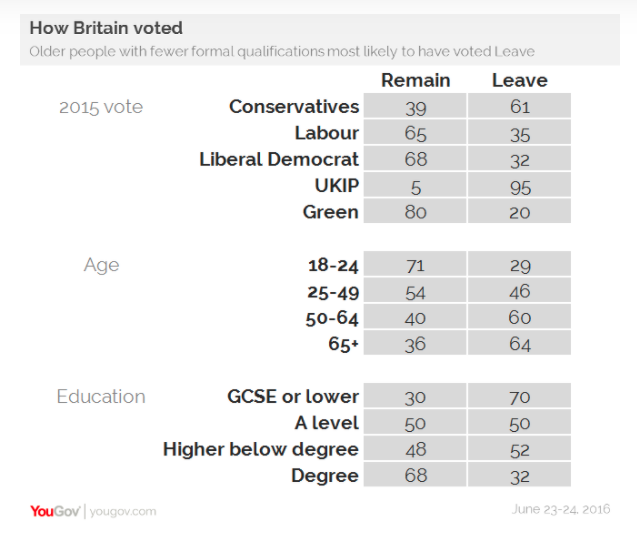 We are now in a totally new political landscape and the opportunity for a new party to thrive is better than it has been in living memory.

We are working extremely hard to make that happen and we are glad that you are with us. We need your continued support to keep up the fight because politics needs to be more about people than parties.

Thanks to everyone who has helped us so far and rest assured that the progress we are making will continue as we grow and reach out to people across the political spectrum and from all backgrounds.