The tragic murder of Sir David Amess MP has overshadowed the news this week and reignited a debate about the security of our elected representatives. One of the better features of politics in the UK is that our MPs tend to be very accessible, and the electorate appears to like it that way. The link between MP and constituency plays an extremely significant part in the way we vote and is often raised as an issue when in debates about fair voting systems and how to retain that link in proportional systems where every vote counts.

Clearly, the security of MPs must be reviewed, both in the broader context of political/religious terror, as this recent case appears to be, and also with reference to the murder of Jo Cox, which was motivated by very specific domestic tensions around EU referendum, and the deliberate inflaming of hostility by many individuals during that campaign. In the first instance, we know that the security forces are working primarily to prevent such acts with the use of watchlists, surveillance, and other anti-terrorism methods. In the second, we can all participate, by moderating our discourse, particularly online, and also by holding others to account, particularly those in parliament, who continue to use irresponsible, inciteful, and provocative language against political opponents on the domestic stage.

On this topic, and in the wake of Amess' death, Mark Francois and other MPs have proposed the enactment of a 'David's Law' to address online abuse, the use of anonymous social media accounts and the 'toxic environment' that many MPs, particularly women, are subjected to online. Clearly, the issue of online harms and the under-regulation of social media giants is extremely salient and needs addressing with urgency. With regards to Mr Francois' interjection, however, it's important to note firstly that this issue applies to everyone, and not just MPs, and secondly, that Francois himself is particularly responsible for the coarsening (and cretinizing) of public discourse. As a bully heading a campaign to stop bullying, his appearance rather smacks of the famous 'leopards' meme applied to those suffering consequences from something they wanted to impose on other people. 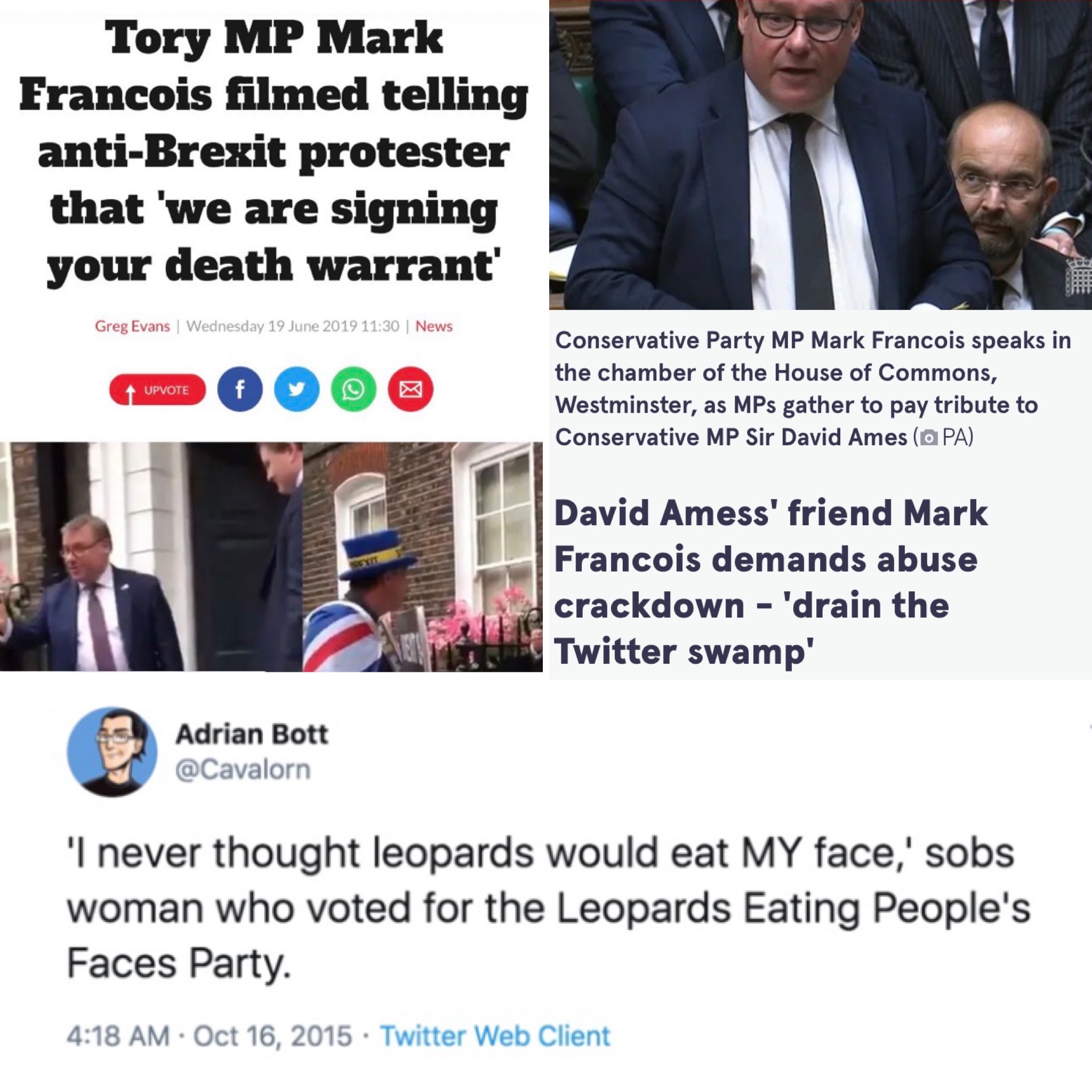 The issue of Democracy and Technology was, in fact, introduced at the Renew Conference two weeks ago as one of our 5 Marquee Policy Areas, and specific reference was made to this issue. With your indulgence, I will quote the proposed policy position in full.

Renew would update the way we regulate online activity in order to protect individuals, ensure greater trust in our online media and seek fairer contributions from Big Tech for turnover generated in the UK.
The speed of technological advances and the explosion of social media platforms have outstripped regulation made for an analogue world. The borderless nature of the internet has allowed big tech companies to separate their tax exposure from the locations where they make their profits. Hostile state and non-state actors have exploited weaknesses in this underregulated environment to manipulate democratic processes in a number of countries.

a) Reduce online harms and reign in the digital free-for-all.
Compel tech firms to comply with existing UK harassment laws. Companies that facilitate harassment must be held accountable.

c) Create regulatory alignment between online and traditional media.
Reconcile the differences in the regulatory approaches to reduce social ills, such as online abuse, fake news, misinformation and political interference from foreign and non-state actors. Responsibility for the distribution of content to be shifted back to the publisher.

It is important to note that attempts to tidy up, modernise and align tech regulation do not represent a singling out or scapegoating of social media or tech, but an overdue rehaul of old laws originally intended to regulate the power of newspapers and print media. It's important to note the value technology has in enhancing our democracy by shedding light on corrupt practices and bringing more transparency. The Pandora Papers (and before them the Panama and Paradise papers) harnessed technology to bring often illegal, but perfectly common international practices to light, especially those related to the opaque methods by which foreign money finds its way into the UK political system.

Given the long and shabby tradition of 'Cash-for-Questions', 'Cash-for-honours', PPE procurement, and various MPs expenses scandals, it is abundantly clear that the system is full of loopholes that have always been exploited by UK individuals and businesses for financial gain. However, these recent leaks reveal a newer story of interference, increasingly by foreign and non-state actors whose interests and agendas may be more political and more damaging to our democracy and our society as a whole.

Corruption scandals are common amongst governments that have been in power for too long as the powerful look for ways to feather nests before a period in opposition. Perhaps it is also the case that systematic failures of governance, including such scandals, plus grinding incompetence, the inability to attract new talent or new ideas, and the stubborn, blinkered seizure of quasi-religious political beliefs, may be signals of a political system that has been in place for too long.
As we in the UK lurch from one crisis to the next, and seek to manage them through PR and messaging, rather than addressing them through practical measures and a compelling vision, it is crucial that those of us who care about the future continue to organise ourselves and to offer an alternative.

In the coming weeks, Renew will be launching our policy positions and reaching out to the broader electorate with messages of reform, participation, and renewal. Please continue to follow us, share our output online, look at our refreshed website and join us as a member or donate to help us continue this work.