The UK's student population have had a tough year.

Studies on those graduating during a recession have shown that 'unlucky graduates suffer persistent earnings declines lasting ten years. They start to work for lower paying employers, and then partly recover through a gradual process of mobility toward better firms... more advantaged graduates suffer less from graduating in recessions because they switch to better firms quickly, while earnings of less advantaged graduates can be permanently affected by cyclical downgrading.'

The effects of 2020 on young people cannot be overstated. So, given this deeply harmful state of affairs, how did the Government seek to ensure that this unlucky generation were treated fairly, or at least not further disadvantaged? The answer was not, as any fair-minded person might have concluded, to give these students the benefit of the doubt with regards to their predicted grades based on personal endeavour. The Government's approach was to attempt to mitigate the possibility that students might be awarded higher grades than average (based on their school's historical performance) by building an algorithm that downgraded 39% of results. If anyone was wondering how the Government's 'levelling-up' agenda might pan out, this was a taster.

Now, aside from the clear moral arguments against trying this, it was thunderingly obvious that the plan would be wildly contentious, unpopular and impractical to implement or defend. When the story broke, Education Secretary and hapless dolt Gavin Williamson was wheeled out to recite his lines in The Times on Saturday, “This is it!” he mumbled, emphatically. “No U-turn, no change”, providing us with a good indication of what was to come. Two days later, with parents, teachers, students and educational professionals up in arms and street marches underway, the impossible/inevitable U-turn was announced.

It was open-season on Williamson and the Government. Attempts to scapegoat Ofqual were dead-on-arrival, with one refreshingly direct Vice-Chancellor telling the Guardian, “I would be happy to see Gavin Williamson resign. He’s f*cking useless.”
Rumours are that the Education Secretary will not resign but will be replaced at the next cabinet reshuffle, perhaps by an upgraded algorithm. 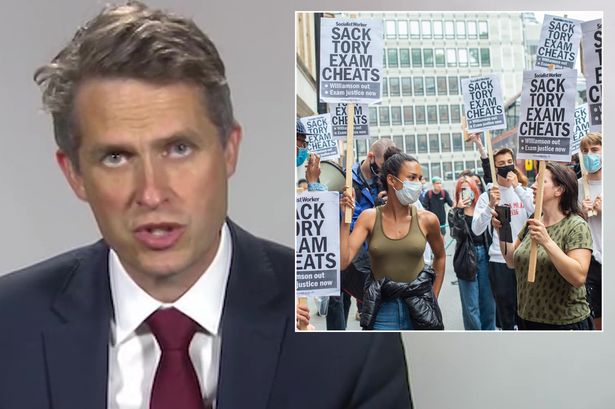 So how do these cock-ups keep cocking ever-upward?  When Johnson won his 'stonking majority' many expected, with either apprehension or relief, that governing would be a piece of cake (for having and eating, naturally) and yet this has not been the case. In fact, the number of U-turns and climb-downs has been astonishing in a government with such a secure majority.

The idea that Johnson and Cummings packed the cabinet with hopeless Brexit lickspittles and craven no-marks is accepted by journalists, business, science, the opposition, neutrals and the rest of the world, but it appears to be understood in certain Tory circles, too.

Tobias Ellwood, chair of the defence select committee, in a less than ringing endorsement, admitted on Tuesday that Conservative WhatsApp groups have been aflame with frustration and that, “Moving forwards in the long term, ultimately we need to see the cabinet as a whole occupied by people who have the talent and drive to lead their departments and freedom to express their views privately.” In other words, qualified people.
Similar noises came from Paul Goodman, editor of the influential ConservativeHome website in an interview with Politico on Wednesday, referring to a 'growing consensus... that this Cabinet is collectively inexperienced and weak.' Johnson approval ratings among the Tory membership have also dropped 20 points in recent weeks.

But, for the time being, Williamson, the man who famously told Russia to 'go away and shut up' remains in place, a playground minister in a playground cabinet.