With faith in our government sunk in what looks like a long and dismal trench, it has taken a brave and principled intervention from that most-maligned of figures, the professional football player, to provide an encouraging story this week.

Manchester United and England striker, Marcus Rashford, who has helped FareShare raise £20m to provide 3m meals for vulnerable people during lockdown, managed, with an open letter to MPs, a few tweets and an excellent interview with the BBC, to shame Johnson into doing a u-turn on cancelling food vouchers over the summer holidays.

Rashford himself had relied on free school meals and food banks as the son of a single mother, with 3 siblings growing up in Wythenshawe, Greater Manchester.

Given the type of negative press young black footballers are accustomed to receiving, the willingness to go out on a limb and call out the government in this way was admirable, remarkable and a positive indication of civic activism.

Revealingly, it is understood that the decision to reinstate the vouchers was largely due to Rashford's massive Twitter following and the threat of a backbench rebellion on the topic. Whilst Tory instincts have not changed, their willingness to conduct humiliating u-turns to avoid bad headlines has (except, naturally, where Dominic Cummings is concerned).

'Just look at what we can do when we come together', Rashford, 22, wrote on Twitter in response to the turn-around.

*Reminder: in 1995, just 2 years before Rashford was born, our Prime Minister (whose personal record of keeping a family together is spotty at best) accused single mothers like Melanie Rashford of producing a generation of “ill-raised, ignorant, aggressive and illegitimate children”.

If you are struggling to digest the idea that football might be capable of providing moral guidance to the Conservatives, there's more to come; on Wednesday night the Premiership resumed with a distinctly contemporary social theme.

Players' shirts were proudly emblazoned with 'Black Lives Matter' across the shoulders where their names would normally sit and all players, staff and officials knelt before the kick-off in a unified gesture of solidarity with the movement. For a global multi-billion pound industry to take such an unambiguous stance was extremely encouraging, and the response to the move was also very supportive, particularly in the light of the controversy surrounding recent protests. Amongst many, the explicit position taken by footballers, teams and the authorities may work to diffuse a good deal of recent tension around the issue. The gesture will not go unnoticed in the US, either, where English football is broadcast and watched by millions. 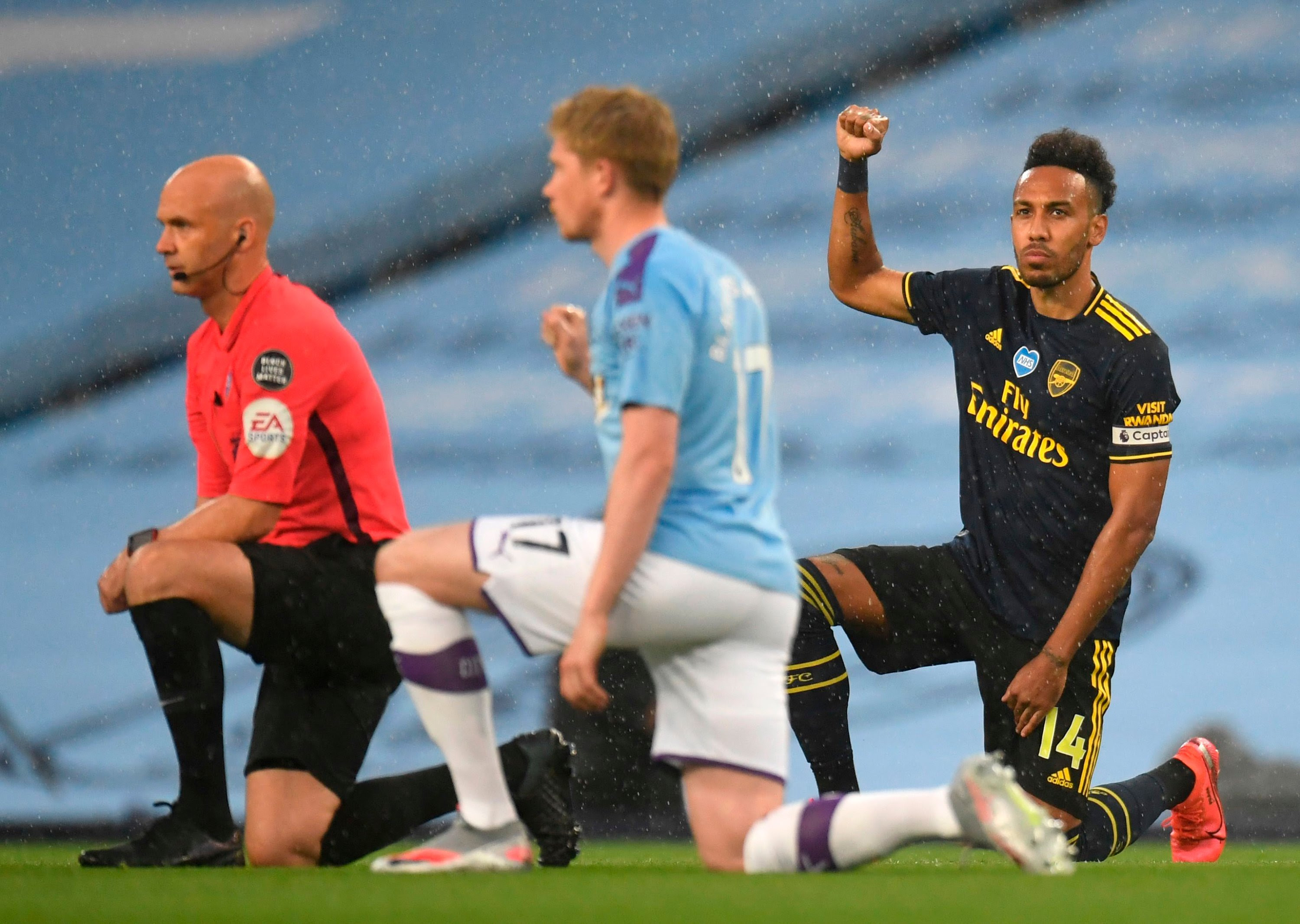 Manchester City's Pep Guardiola spoke for many, "Maybe for our generation it is too late but for the following generations, they can understand the only race is ourselves. We are human beings. It doesn't matter the colour of our skin."

But of course, not everyone felt the same way (wait for it...):

The government's error-prone 'Dom Jr.' (Mr Raab, to you) decided to go on talkRadio to inform us that he felt the taking of the knee to be a 'symbol of subjugation' somehow connected to the TV show 'Game of Thrones', before contradictorily fantasizing that he himself would consider kneeling for our own throne-owner, the Queen. Though what Raab might get a knighthood for is a riddle for the ages; services to Anglo-French geography, perhaps?

As a fan of Game of Thrones, one can almost imagine Raab with a cameo role, perhaps cast as 'Dim Spannister' who dies 10 minutes into his debut after getting lost in the dark and drowning in a moat. Or being easily tricked into eating a poisoned baguette from Pret. Or choking to death on a long word.

No one expected better from Raab (or any member of Johnson's cabinet), of course, but Rashford's contribution to public discourse was fresh, frank, thoughtful, honest and hopeful.

As the government sheds its moral authority like skin off a reptile, it's encouraging that younger voices from outside politics can step up, invigorate the discussion and perhaps get more people to think more practically about political participation.

It's certainly something that chimes with what we have been working towards with Renew and intend to continue, with your help. We need to add our voices to help humanise and universalise politics to include everyone, to be open and to take part.

"It's one thing thinking about it... in your house, but if you don't get that message out to the people, and to the people higher up that can possibly change the way things are going then there's no point in having those thoughts."

Anti-Racism Protests in Britain: What’s Next?: Renew supporter Zach Mayford argues for the removal of the statues of slave traders.

The toppling of the statue of Edward Coulson in Bristol has triggered a national debate about not only the legitimacy of various historical monuments up and down the country, but also the detail in which we are taught about British history, and, more specifically, the history of the British Empire.

This week on Digital Democracy, we suggest a wider, more inclusive and thorough school syllabus on the history of the British Empire and it's legacy. 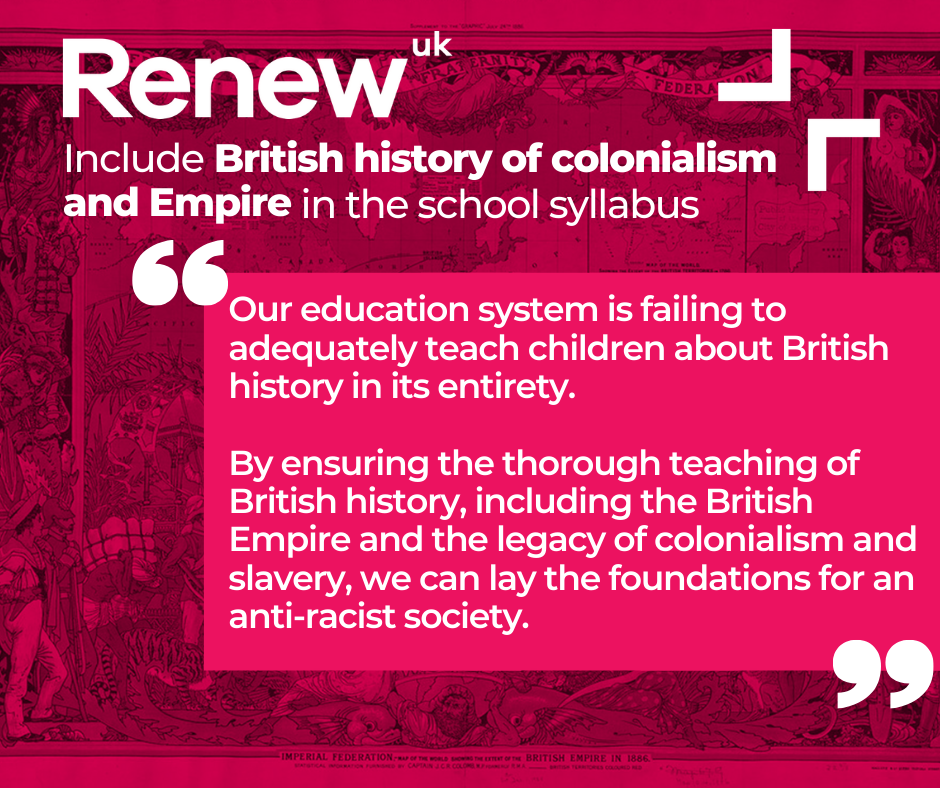 We want to know what you think. To comment on this policy idea, head to Digital Democracy today.

Remember: you need to be a Renew member to vote on Renew policy ideas. Sign up today for this exclusive benefit.

As always, our Digital Democracy platform remains available to members to make any policy suggestions.