It has been another dramatic week in the UK. The crime bill that would 'make a dictator blush' passed its second reading in the Commons. Supply issues make it likely that the under 50s will not get the vaccine until at least May. Both Sadiq Khan and Ed Davey made premature, publicity-seeking comments calling for Dame Cressida Dick to resign over the handling of the Clapham Common vigil. The New Statesman devoted its recent issue to the undeniable fact that Brexit is breaking Britain and the current system cannot hold. Dominic Cummings attempted to settle a few scores and also take credit for the vaccine in his testimony to the HOC science committee. It also brought him face-to-face with former business secretary Greg Clark, to whom he famously ranted  'When are you f***ing MPs going to realize we are leaving on October 31? We are going to purge you.' back in 2019. Funny how things turn out.

We also discovered how far £2.6m can be stretched if you are an astute Conservative government looking to ape White House press briefings. 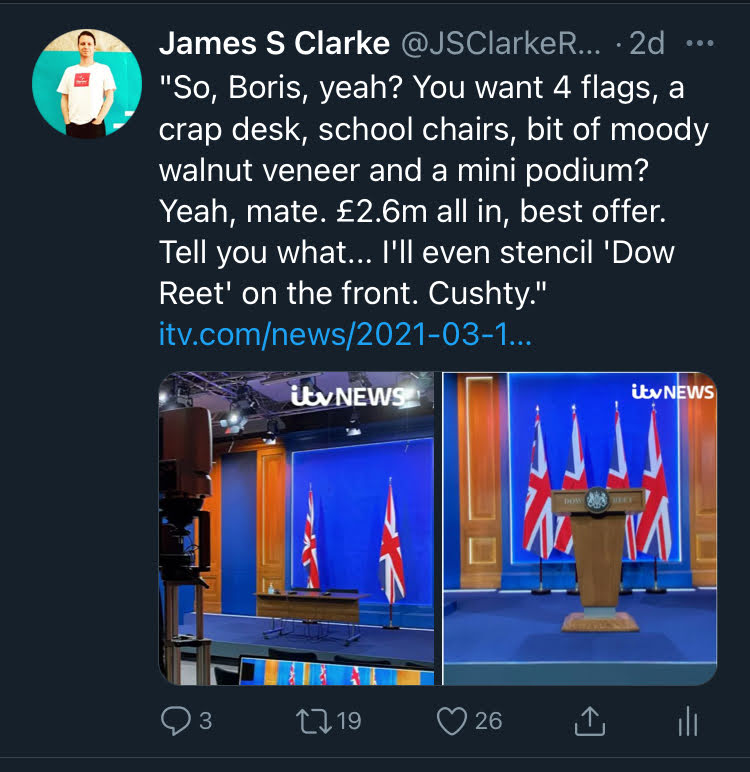 As regular readers will know, we are currently gearing up to run in the London Mayoral and the Scottish Parliament elections, recruiting candidates, raising money, designing materials, and, inevitably, filling in vast amounts of paperwork. Each election has its own peculiar character and these two elections are shaping up to be extremely interesting. In Scotland, we know that the election is being perceived as a proxy referendum on independence, much as the 2019 General Election was treated as a proxy for Brexit. It will not be easy to cut through the noise, but our excellent candidates will be working to bring a message of hope and reform to Scottish voters in what is bound to be an extremely divisive and fevered atmosphere. 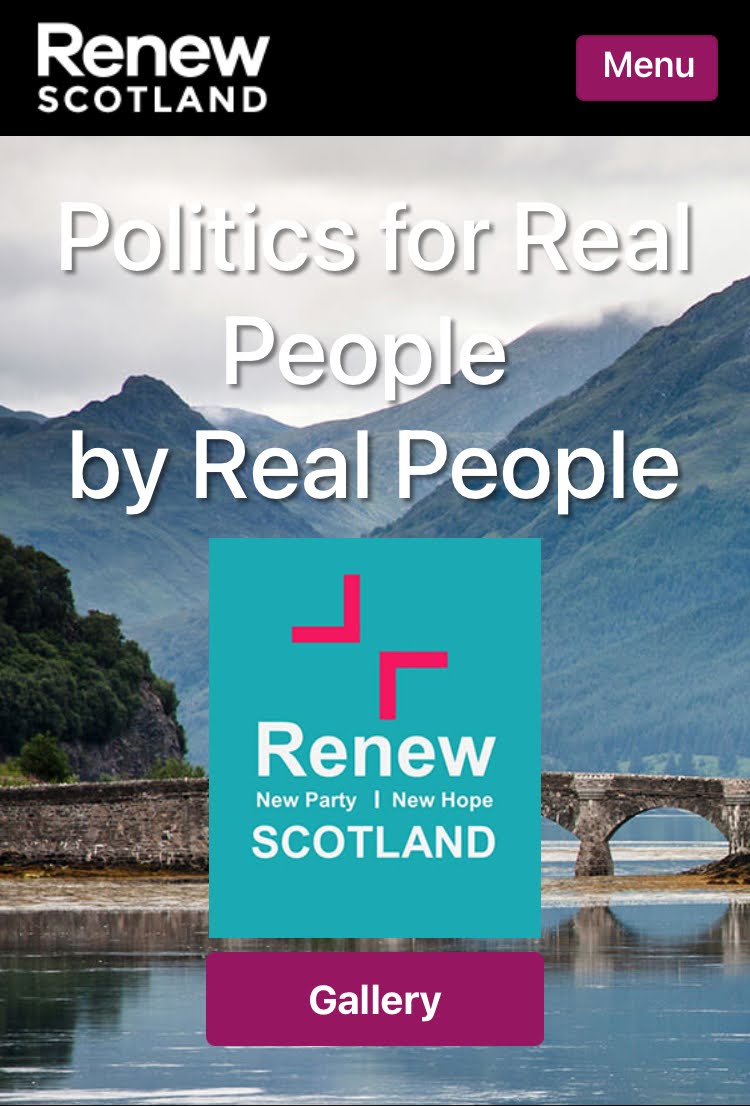 In London the array of announced candidates is vast, and, given the characters involved, it might lead to some intriguing debates, if indeed they are permitted to proceed. In addition to our Renew candidate Kam Balayev and the Tory, Labour, Lib Dems and Greens we have:

- Former actor Lawrence Fox who is standing as 'Reclaim', to protect and increase the number of statues in London.
- A former Tory, now Independent called Farah London (unclear if she changed her name for electoral advantage).
- A UKIPer whose birth name is literally 'Gammons' (unclear if he was selected on the basis of his surname).
- Charlie from Pimlico Plumbers, Independent, another former Tory who says the Conservatives have turned their back on London.
- Mandu Reid of the Women's Equality Party
- Count Binface (the artist formerly known as Lord Buckethead), Independent, who is promoting the homeless charity Shelter.
- Piers Corbyn, Independent, who appears to be running on a pro-virus platform.
- Brian Rose, Independent, who appears to be running in order to split the pro-virus vote with Corbyn.
- David Kurten, Independent, who appears to want any of the leftover pro-virus action that didn't go to Corbyn or Rose.
- Rapper Drillminister, whose platform involves diversifying the Met police and antagonising Shaun Bailey.
- Winston McKenzie, Unity In Action, whose platform includes deploying peacekeeping army units on the streets.
- Valerie Brown, Burning Pink, who wishes to replace the political system with citizens’ assemblies.
- Nims Obunge, Independent, who wants to make London carbon neutral by 2030.
- Rosalind Readhead, Independent, who wants to make London carbon zero by 2025 (which will surely irk Mr Obunge).

It won't have escaped your notice that some of the comedy candidates have better policies than the serious ones.
In a field so wide it will also be tough for Renew to cut through the noise, but we are looking at ways of doing this. One is to organise and run a 'Challenger Hustings' for the benefit of the candidates who are unlikely to be invited to the main TV and radio debates. You can help by chipping in to Renew's crowdfunder for Kam's campaign. 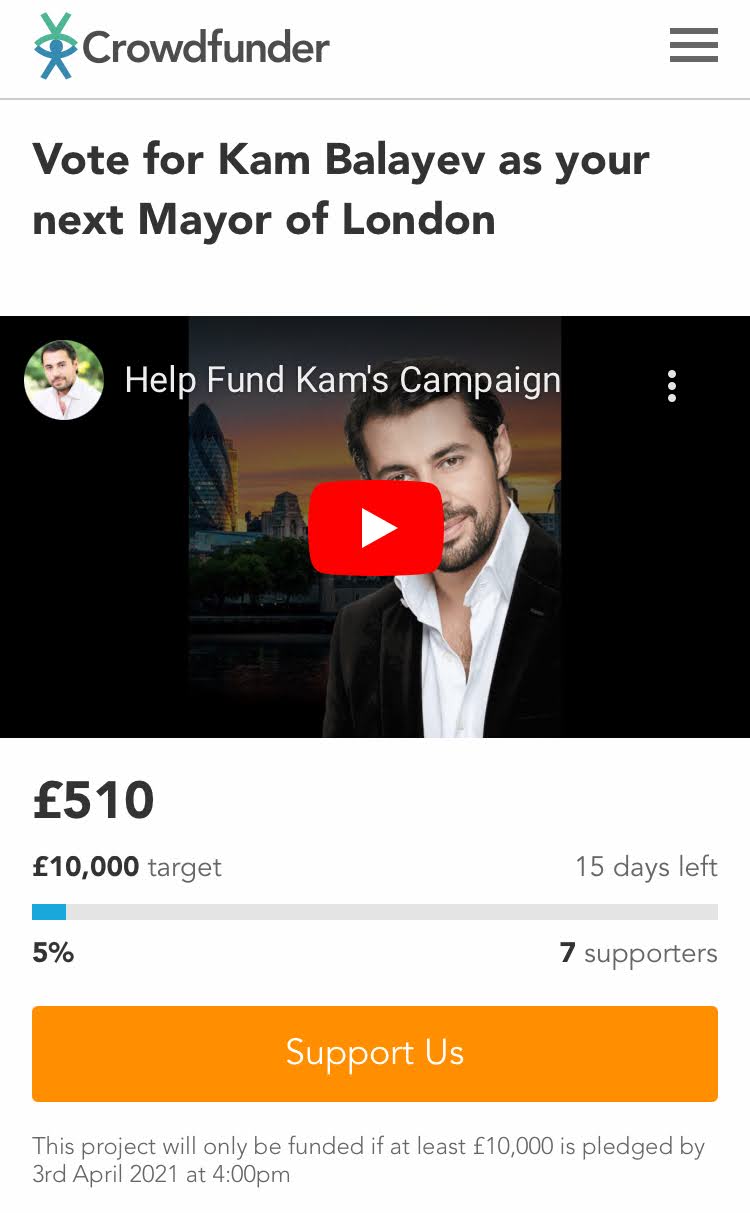 The other interesting thing is the announcement of a by-election in Hartlepool. A disgraced Labour MP, a 70% leave vote, a major Brexit Party presence (Richard Tice stood there in 2019), it sounds rather a lot like the Peterborough by-election from June 6th 2019. Naturally, it is in Renew's instincts to stand in this by-election, but since it will almost certainly be held on May 6th, it might stretch our resources a little thin. If anyone knows a willing (and preferably wealthy) candidate from the area, we'd love to hear from them!

For fans of the UK's colourful electoral history, Hartlepool elected a monkey football mascot called 'H'Angus' as mayor. The gentleman in the monkey costume was finally forced to make the following clarification, "I am Stuart Drummond, I am the mayor of Hartlepool, not the monkey." In the end, the people of Hartlepool voted to abolish the mayoral system, but not until 2013 by which time H'Angus the monkey had won three straight elections.

Please consider helping us further - Join Us, Volunteer or Donate.