This morning I listened to Matt Forde's excellent podcast with Dave Rowntree, does the name ring a bell? Well, Dave is best known as the drummer from Blur, one of the biggest and most influential UK bands of all time. He is second-best known as the Councillor for University Ward on Norfolk County Council, since 2017. Truly.

It's quite a bizarre thing to discover, like the TV show Stella Street, in which Mick and Keith from the Stones ran a corner shop.

I was particularly struck by Dave's answer as to why he got into politics.

"I'd gone, 'Somebody needs to do something! Why isn't somebody doing something?' And I thought, oooh. Errr, that somebody perhaps might be me."

Sound familiar? This is a variation on the answer I receive almost every time when I ask Renewers why you joined up with us. We should stick in on the side of a bus or tattoo it on our forearms. As a political slogan, it has the rare virtue of being completely true and accurate, in our case. 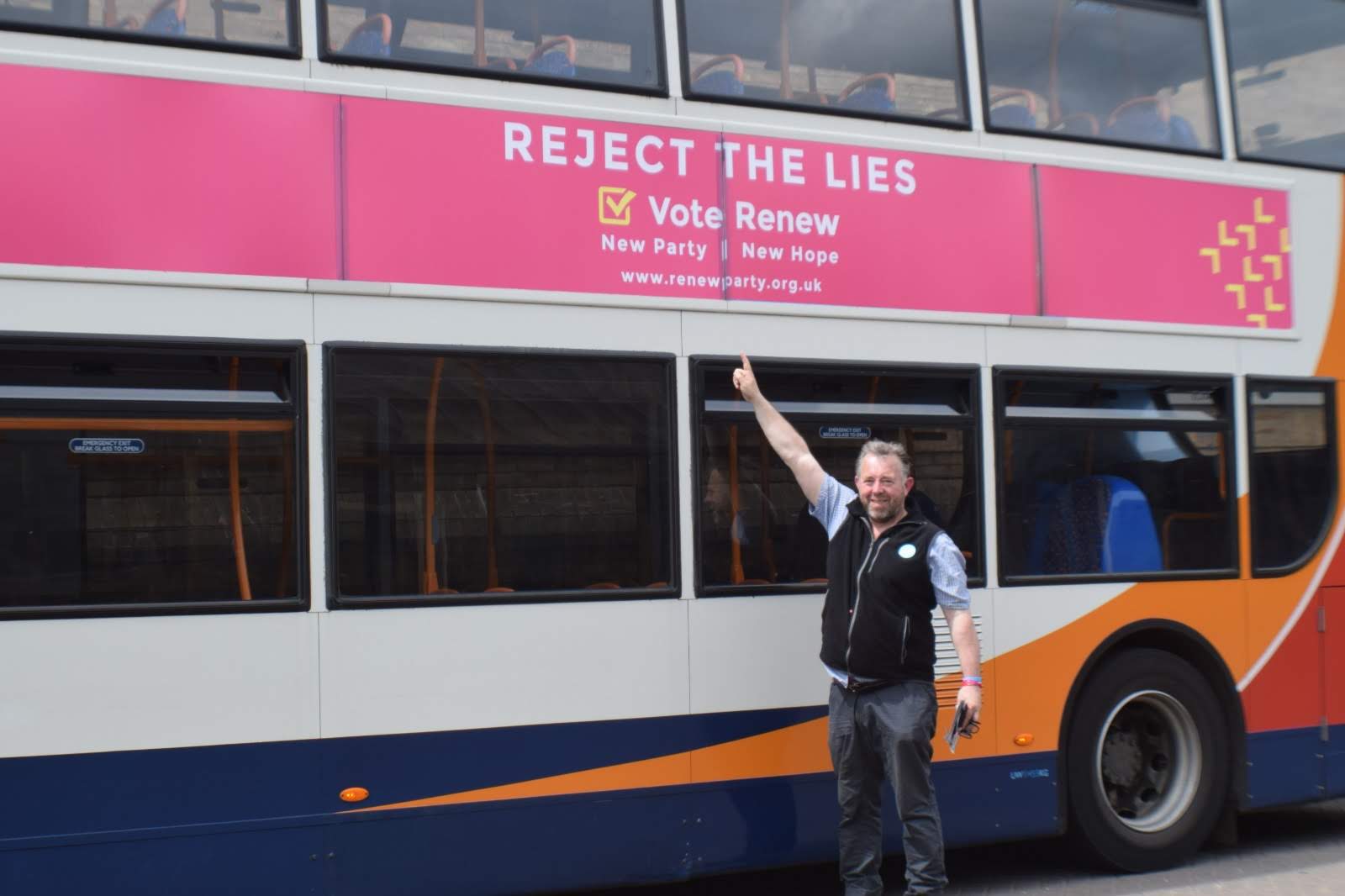 Our side of the bus.

And this is really something that distinguishes us at Renew. Motivation is extremely important in all walks of life, but doubly so in politics. This is why we are so impressed by people who go into politics, with all the risks that entails, when they really don't need to. Marcus Rashford is the best recent example, but there are many others, notably Martin Bell, former BBC correspondent who stood as an independent candidate in Tatton against Neil Hamilton on a platform of opposing 'sleaze' and absolutely dominated the election, overturning a 22,000 Tory majority and winning by a margin of 11,077 votes. We at Renew would absolutely love to recruit that kind of candidate and, in fact, I intend to reach out to the thoroughly decent Dave Rowntree and see if he might not defect to us. There's no harm in asking. 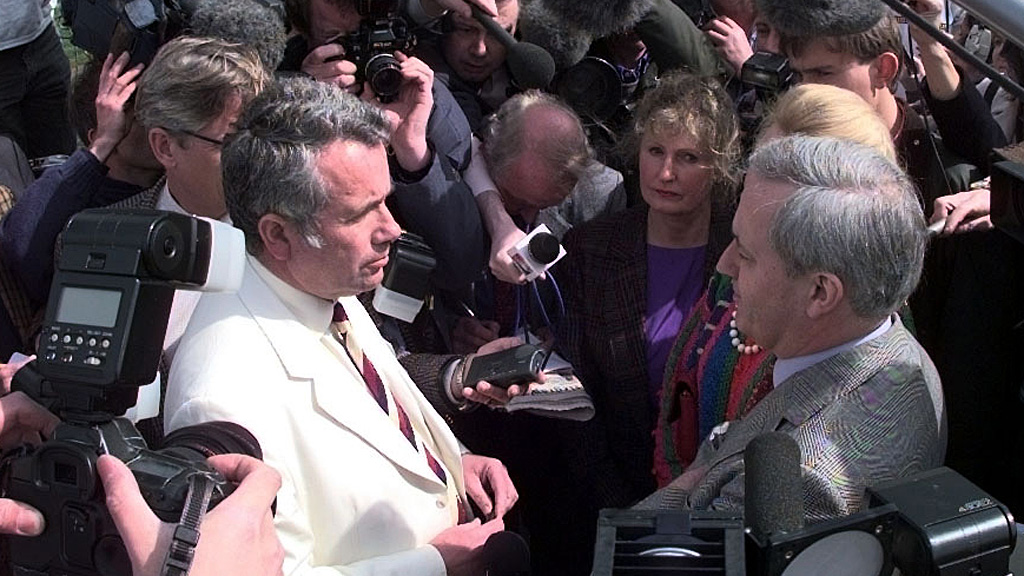 But to return to the point, there is a real impact in people who get into politics with transparently good-faith intentions, not least because there appears to be so few of them in the two main parties. Why is that? Well, let's examine it. We know that most politicians and activists pick a team early on and tend to stick with it, through thick and thin, not least because party loyalty is rewarded far more richly than talent or integrity.

The Conservative Party attracts those who want to govern, those who want power and prestige at any cost. They are perfectly prepared to live in ignominy if they get caught enriching their friends because, by and large, the Conservatives stick together and don't especially care what others think.

Labour attracts those who wish to display their solidarity with the downtrodden, and those who have a taste for factionalism, a love of the minutiae of party rules and procedures and an unusually high tolerance for long, acrimonious, and achingly dull meetings. By all accounts the famous Handforth Parish Council meeting was not remotely unusual. According to both Forde and Rowntree, it resembled a normal Labour Party local meeting. This must go some way to explaining Labour's electoral troubles, not just recently, but going back to its beginnings.

I heard a fact today that was so extraordinary that I had to go and check it. Do you know how many Labour Leaders have ever won a General Election? The answer is 4 (four). Ever. Please feel free to look it up. Tony Blair, Harold Wilson, Clement Attlee and Ramsay McDonald. And the total number of Labour leaders? 19, and counting. This is quite an astonishing stat. And for the Conservatives, during the same period? Johnson, May, Cameron, Major, Thatcher, Heath, McMillan, Eden, Churchill and Baldwin. That's ten, out of a total of 15. The opposition are batting at 21%, when the required standard is 75%.

It begs the question, for how long can we keep rewarding those who fail us? For how long can we maintain the fallacy that the only solution to our political problems are the self-same people who created them? If a cowboy plumber destroyed your bathroom, would you pay him a second time to fix it? Of course not. And yet we are told again and again by political activists that the only answer to a Conservative eternity is Labour or, hitherto, the Lib Dems. How is that working out for us? This fantasy can no longer be entertained. A quick reminder; if a united opposition are not able to overturn a majority of 80 seats at the next election then we will be looking at a record 5th straight win for the Conservatives, and perhaps a sixth.

So where does that leave us at Renew? Well, if we stick to our guns, then we must believe that our time will come. Just as all good things come to an end, so do all bad ones. The appetite for something new is out there, party political loyalty is at an all-time low, Brexit and COVID have laid bare the inadequacies of the current system and the parties that prop it up. It is up to us to harness that dissatisfaction, but also to corral the hope that springs from it.

'And how might I do that?', I hear you ask. Well, luckily, you will have ample opportunity in 2021. As you will know, Renew is standing in the Scottish Elections and also standing Kam Balayev for Mayor of London on May 6th. We are also happy to support those of you who may wish to stand in the local elections. And we are going to need all hands to the pumps. Since these elections are being held in unusual circumstances, the majority of the campaigning will be done online and in the media, so everyone will be able to join in. Things that can be done to help include, but are not limited to:

We have a small but dedicated team of spokespeople, regional coordinators, candidates and interns. We are in the process of recruiting 3 new extremely capable and motivated interns and our new data analysis tools are turbo-charging our ability to get targeted messaging to the right places.

In short, there is every opportunity to take part, often in real, tangible and effective ways, to gain experience in political activism and to help drive Renew forwards.

How to get in touch? It couldn't be easier. Mail us at [email protected], message us on facebook, twitter, instagram or LinkedIn, or even better, pick up the phone and talk to us directly, The door is always open at Renew.

I look forward to hearing from you all in the coming weeks, which will be frantic, but exciting.

In the meantime, if you like what you see here, please - Join Us, Volunteer or Donate.