Your Country Needs You

The G7 meeting last weekend was illuminating in the way that it shed light on the awkward political binds that our government has conspired to engineer for us. The United Kingdom is clearly struggling to maintain its place at the big table, protect its wobbling reputation and keep up its end of the deal in numerous international obligations and agreements.

On this occasion, the flashpoint was Northern Ireland. The G7 event was fraught with the risk that the US and EU would attempt to publicly shame the UK over its bad faith posturing over the Northern Ireland protocol. In brief, Johnson has openly threatened to invoke Article 16, (effectively suspending the protocol) if the EU did not agree to break the rules for his benefit. Fortunately for Johnson, the nightmare PR scenario was mostly averted. Whilst EU leaders kicked up a modest fuss, Joe Biden largely kept his counsel. It is wiser to build political capital at times like these and bank it, for use at a more effective moment.

But of course, if it wasn't Northern Ireland, it could have been one of any number of problems inflicted on ourselves and others. The status of Northern Ireland is an inconvenient fact. As is the Scottish independence movement. As are the betrayed fisheries. As are the conflicts between food standards and trade deals. As are the livelihoods of UK farmers. As are the status of 3m EU citizens in the UK and the 1.3 UK passport holders in the EU. As are the overindulged COVID-sceptics in Parliament and in Trafalgar Square. It goes on.

There is an obvious 'elephant-in-the-room' contradiction between 'Global Britain' rhetoric and 'Little England' protectionism. There is the colossal hypocrisy of telling the Scots that we are 'Stronger Together' after cynically undermining that self-same message in the EU referendum. There is the childish cakeism of insisting on a border with the EU and simultaneously denying that it needs to actually exist. There is the constant and wearisome employment of brinkmanship and threats in place of negotiation or diplomacy. There is the frequent and shameless treatment of the Withdrawal Agreement not as a binding legal document, but as a clever trick, pulled off to create the illusion of getting Brexit done, for the purpose of winning an election.

Nigel Sheinwald, a former UK ambassador to Washington and the EU, said: “The lesson of this week is that you can’t have a global Britain which is genuinely respected and influential and impactful around the world if people doubt your basic bona fides. There is no point in writing new Atlantic charters which depend on mutual trust, mutual confidence and the rule of law, when you are operating as chancers.”

Make no mistake, the UK's burgeoning reputation as a contract-breaker, as an untrustworthy counter-signatory, as a noisome and difficult neighbour is becoming a headache for our erstwhile allies in Europe and the US, whilst no doubt cheering the leadership of Russia, China, and other bad-faith actors that seek to undermine the rules-based international order. 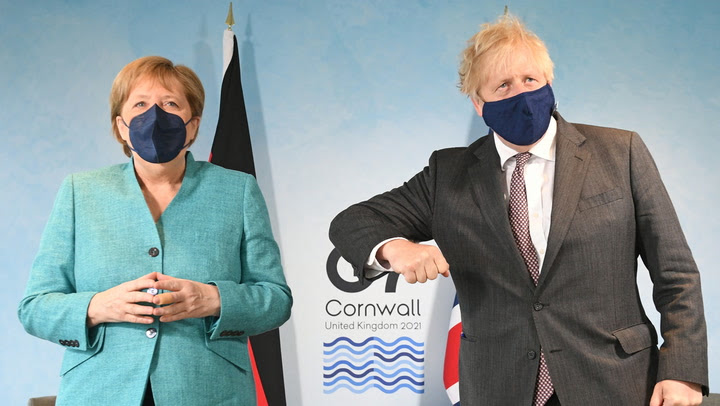 All these issues are not remotely normal and neither are they examples of bad luck or the fault of foreign leaders or governments. There is nothing of the inevitable about them. They are the direct result of a pattern of behaviour that seeks to deflect blame and postpone the consequences of poor decisions and bad judgement.
We are witnessing the constant process of temporarily patching up problems rather than a) admitting them and b) addressing them. Johnson plays the stereotypical terrible partner who is always promising to change, but for whom promising to change is a permanent state, or more than that, a strategy for life. Always over-promise, always under-deliver, then quickly over-promise again. Rinse and repeat. Use sticking plasters in the meantime.

Maintaining contrary and mutually exclusive positions to different parties at different times in order to avert a crisis is not a skillful balancing act. It's certainly not the '3D chess' that many deluded voters and commentators attributed to Donald Trump. It's writing cheques that you cannot cash. In a very literal sense, it's stoking a crisis for the next PM to fix and a later generation to pay for.

The UK is headed steadily into 'the Upside-Down' and Johnson is freewheeling on the never-never, burning through his political capital (and the nation's) like a lottery-winning drunken sailor in Las Vegas. As a man notorious for discarding relationships in order to start new ones, he will know what it's like to surf from honeymoon to honeymoon. But one cannot keep treating major sections of the country like an unwanted ex. Johnson's list of exes now include Europe, the business community, progressives, fiscal conservatives, London, social liberals, reformists, the service industry, city dwellers, pro-Irish America, not forgetting Dominic Cummings & Co, plus all the former Tory MPs who couldn't stomach the pursuit of culture war for political ends and Brexit loyalty pledges. Let's hope his new paramours (when they are not booing on the terraces, attacking BBC journalists, or tuning into the GB News outrage-porn channel) manage to see through his promises sooner rather than later and don't get their heads turned by a nice pair of curtains.

The threat that this presents to the future of the UK must not be underestimated. The George W. Bush era decimated the US's reputation globally in such a catastrophic manner that anyone associated with it was also tainted, not least our own Mr Blair. Not even 8 years of Obama could fix a country that had taken such a hit that the ascendancy of Trump was almost foreshadowed. If we are not to follow the US down that dark and dangerous path, it is imperative that all who oppose it make their voices heard and do not permit their country to spiral downwards. We have built Renew as a platform for people to channel their political beliefs and instincts and to make them more practical and effective. Our watchwords are Reform, Participation and Openness. Although it often seems that indicators are pointing in an unfavourable direction, that is the precise time to stand up, to get involved and to get heard. Once lockdown restrictions end, in-person political events will be able to take place again and Renew will certainly be back in the frontline, offering our party as a vehicle for political activity and actively engaging with like-minded campaign groups. It has been a torrid year, but the opportunities to make a difference will return.