Following the PM's near-miraculous Easter Sunday discharge from hospital, a shocking three days after being in intensive care, there are hopes that his oft-performed gratitude to the NHS, on this occasion, goes beyond mendacious bus slogans.

Whilst the PM extends his convalescence at Chequers it is left to Raab, Hancock and others to take the flak for the lack of PPE, sub-grade ventilators, the care home scandal and the failure to hit testing targets.

Since the unedifying spectacle of Johnson and Co cheering the defeat of a bill to unfreeze nurses' pay (clip here) is still fresh in the memory it will require more than daily press conference tributes to convince a sceptical public that the Tories new-found regard for the NHS will last beyond the crisis.

Indeed, this is likely to be a key theme of Keir Starmer's early leadership of Labour; he will certainly need to be far more effective at holding the government to account than his predecessor (he who must not be named). Unfortunately for him, the opposition leader's honeymoon was rudely (but not unexpectedly) curtailed by the leak of an internal report decrying Labour's factionalism and culture of abuse. The scale of Starmer's task in making Labour electable again was underlined by the response of the left, typified by the 26 year old MP for Coventry South who tweeted that only 'sabotage' prevented a Labour win in 2017. Those who, like myself, believe it may take 10 years to 're-purge' the party may be overly optimistic.

So, back to the virus... Observing countries that wisely locked down weeks before the UK (and/or carried out testing and tracing), there are some signs that a loosening of the lockdown will likely begin in early to mid-May. Rumours of a PR-friendly May 8th Bank Holiday appear to have some credibility, but much will depend on how the lockdown translates into better health outcomes in the coming days. 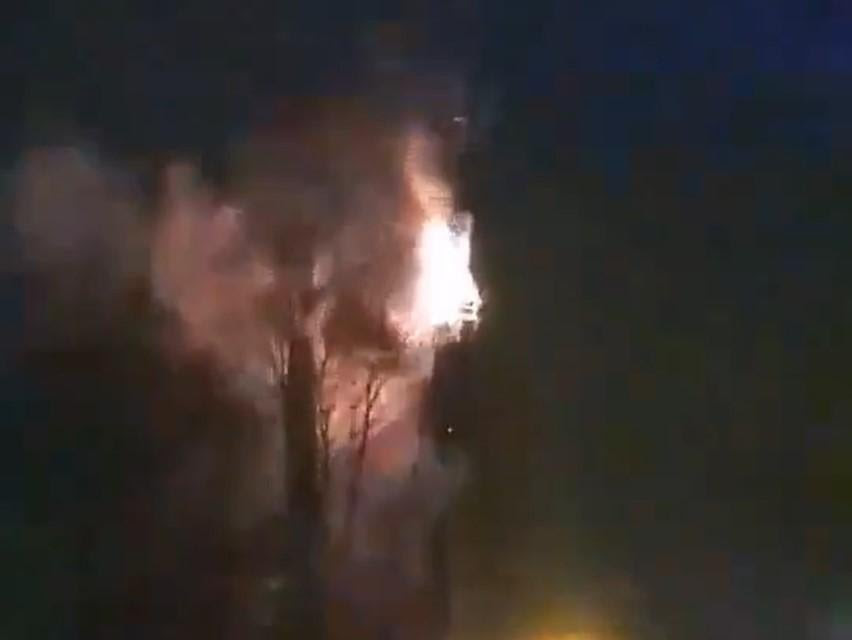 In other news, people around the country are doing their bit to slow the virus by setting fire to phone masts. The half-witted theory that 5G causes COVID-19 was repeated by brain-dead celebrities Amanda Holden and Eamonn Holmes, provoking a wonderful column from the superbly scathing Marina Hyde in The Guardian (well worth a look here). More seriously, the threat that fake news poses to our society must not be understated; theories that the virus is part of a man-made plot are rife and not only found online (I overheard the lady who works at the organic grocers repeat it to a customer just this morning). These theories appeal to our worst instincts and our superstitious inclinations, it is no coincidence that many of them are deliberately manufactured in states opposed to democracy and that they are now a common tool of interference in elections.

I trust that all Renewers are staying healthy and following the rules and I hope that there will be more good news next week. Stay vigilant!

Join us on Facebook, every Tuesday evening for your weekly update on all things Renew, hosted by Renew HQ and our members. Get to know our Renewers and ask any questions you might have. If you're interested in hosting one of these events, or you have any burning questions, email David.

Visit Renew's Facebook page to catch-up on any you may have missed.

Zoom, Thursdays, just after the clap for the NHS:

Get involved with Zoom Thursdays! Every week we host an informal, open Zoom chat in order to check-in and catch-up with our supporters. Last night was quiz night! Invite your friends, your family and let's socially distance together.

In these strange times of self-isolation and "only one form of exercise a day", what else is there to do besides looking back, nostalgically, at fond memories from normal times?

This time last year: On 20th April 2019, the Renewometer was out in full-force in Lincoln! 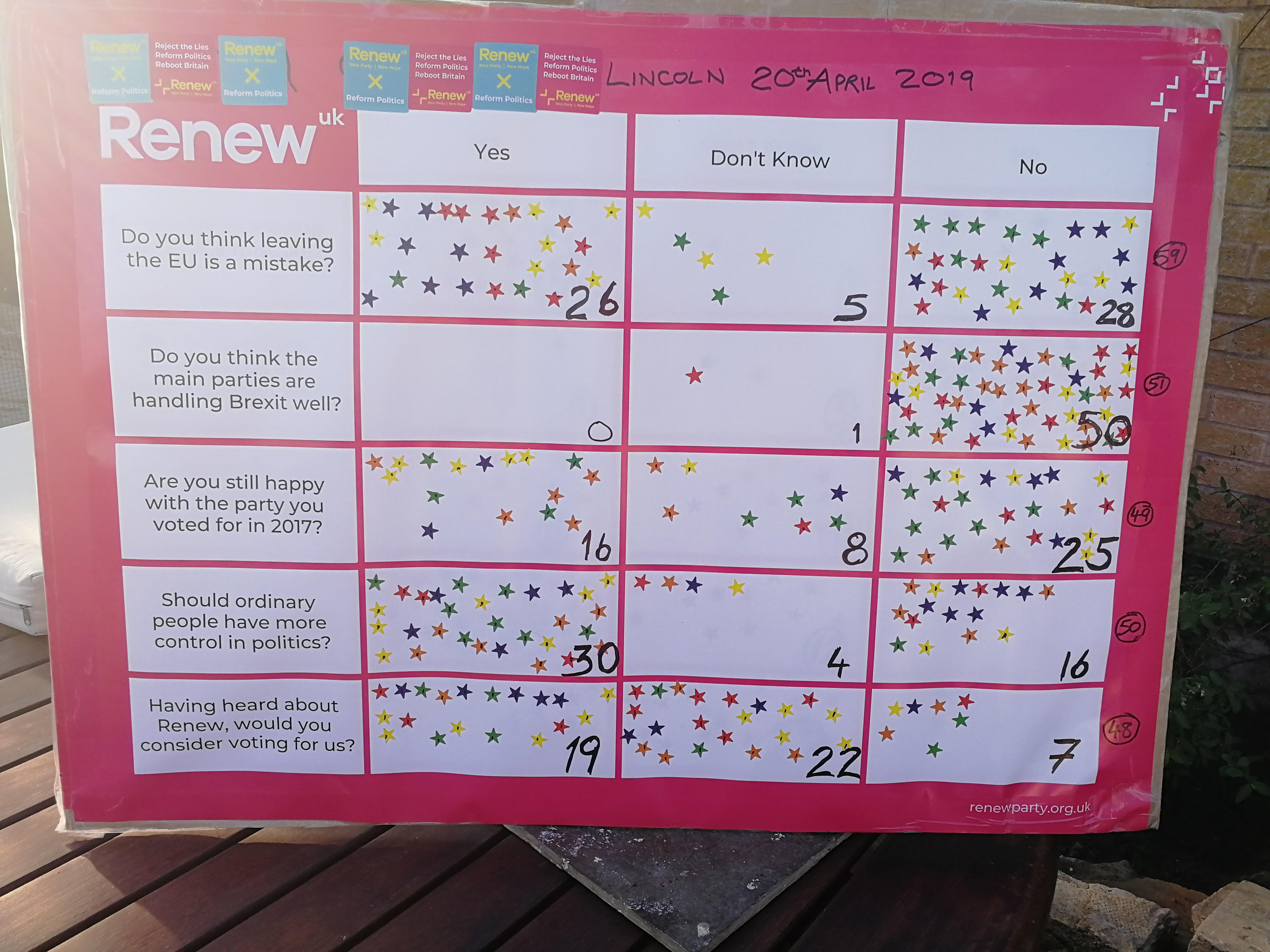 We're excited to launch our updated Renewometers after lockdown, what questions do you want to see asked? 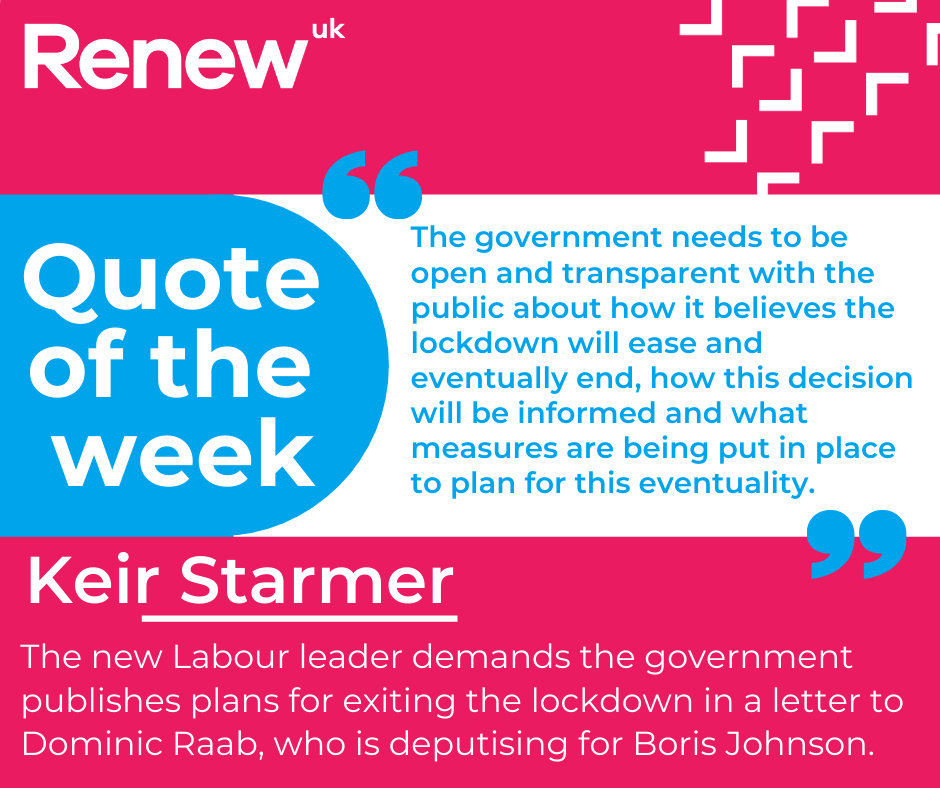