Apologies for the long delay, but here is the second part of ‘A Year in Renew’ – July to December. If you have missed any of our weekly briefings, you can catch up right here.

Renew’s leader Julie Girling steps down after a year at the helm but remains with us on our board and as a close advisor on political and policy matters. Elections are swiftly arranged for the positions of Leader and Deputy Leader and nominations are opened. Renew employs its Digital Democracy technology to allow all members to vote remotely. Carla Burns wins the vote for Deputy Leader from a field of five candidates and James Clarke is elected as Party Leader unopposed. The entire process is completed without fuss in under a month.
Heather Astbury reinvigorates and professionalises our comms infrastructure, Business spokesperson Gary Burke’s thoughtful article on the loan charge scandal gains traction and a number of new supporters and members join Renew as a result. 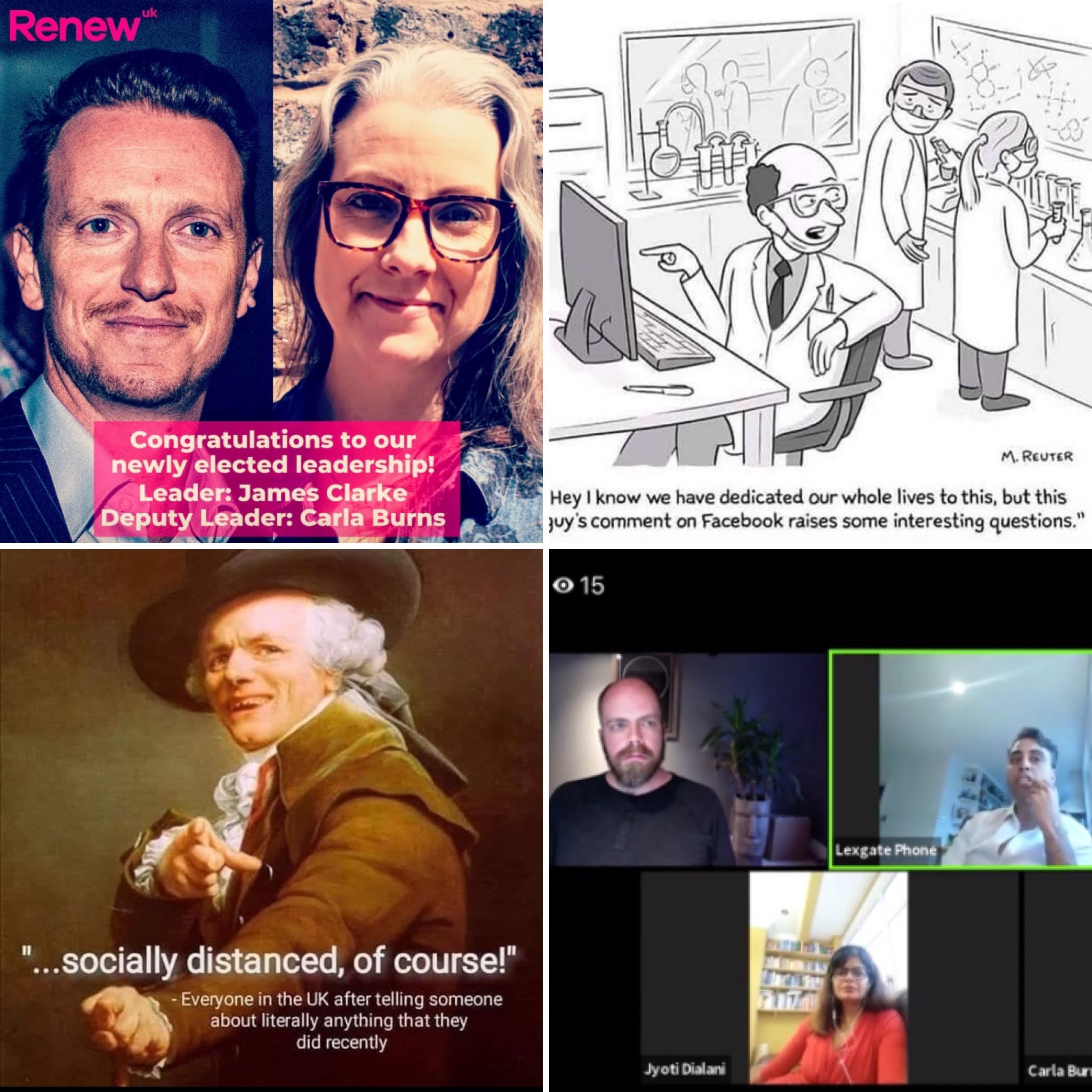 On August 12th, we partner with Make Votes Matter to promote electoral reform throughout the UK. The focus is a socially-distanced flag-unveiling on Westminster Bridge. For fact fans, we at Renew were awarded the humbling responsibility of holding up the ‘V’ in vote.
Renew steps up its progamme of publishing articles and statements by newly appointed spokespeople. They include Haseeb Ur-Rehman on decoding the Russia report, Jamie Hirst on the problems with local lockdowns, David Britten on the exam fiasco, Terry Knott on Brits abroad and EU citizens in the UK, Draeyk van der Horn on gene-editing and Dan James on why social media deserves an ASBO. 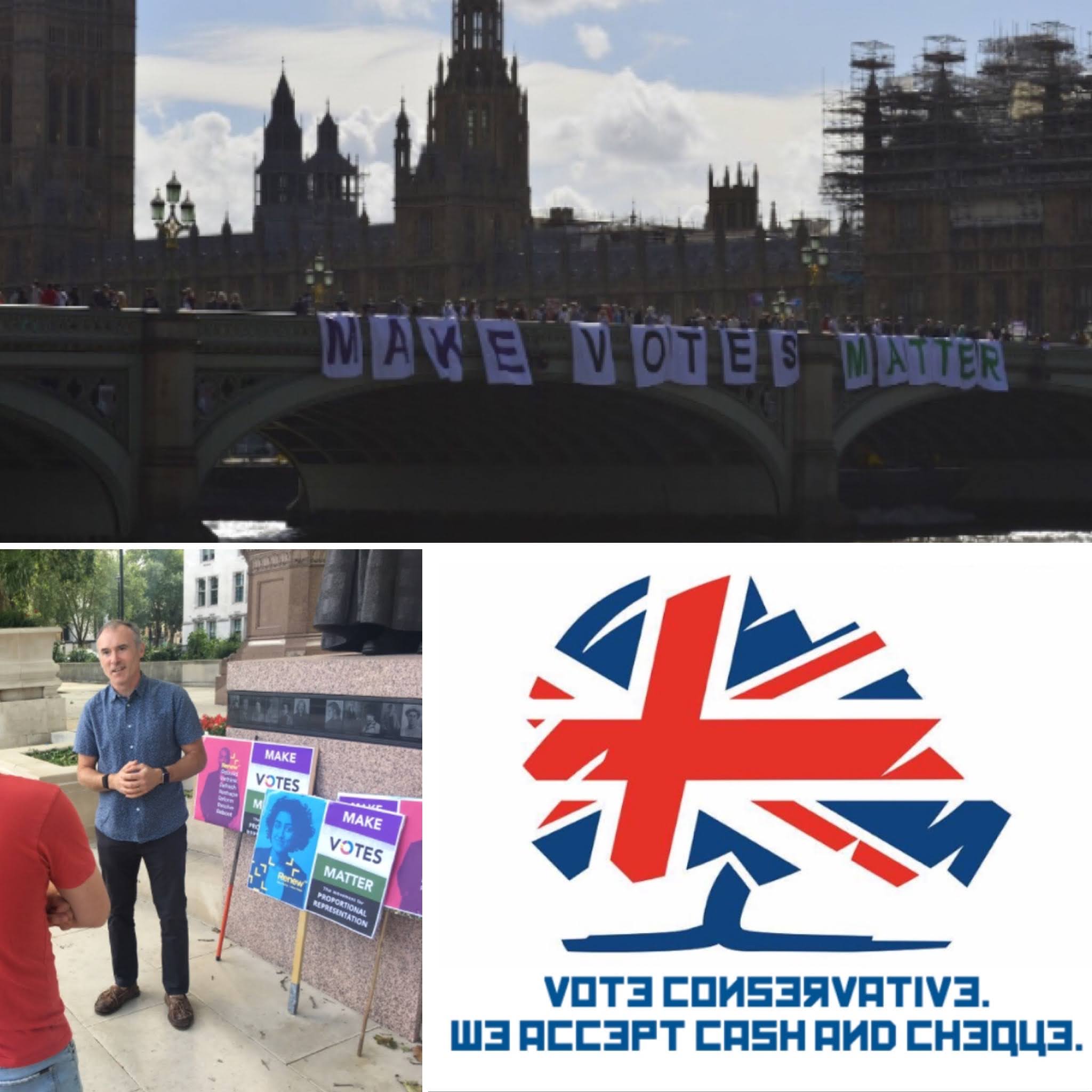 Renew is joined by two new politically experienced young recruits, Alex Gunter and Alex Haida from Volt UK, the UK arm of Volt Europa, the pan-European political party. Their work includes outreach to the broader pro-European and youth groups as well as formulating a new grassroots group within Renew.
Renew's Comms team, led by Heather Astbury launches a new regular series of live interviews. The first tells the story of the party's beginnings in 2017 and the second is an introduction to Renew’s Deputy Leader Carla Burns.
Terry Knott publishes on the reality of the 1.3m Brits living in the EU. Tom Meek reviews John Micklethwait and Adrian Wooldridge’s new book: ‘The Wake Up Call. Why the pandemic has exposed the weakness of the West – and how to fix it.’ Alex Haida writes on the UK future options of a relationship with the EU. 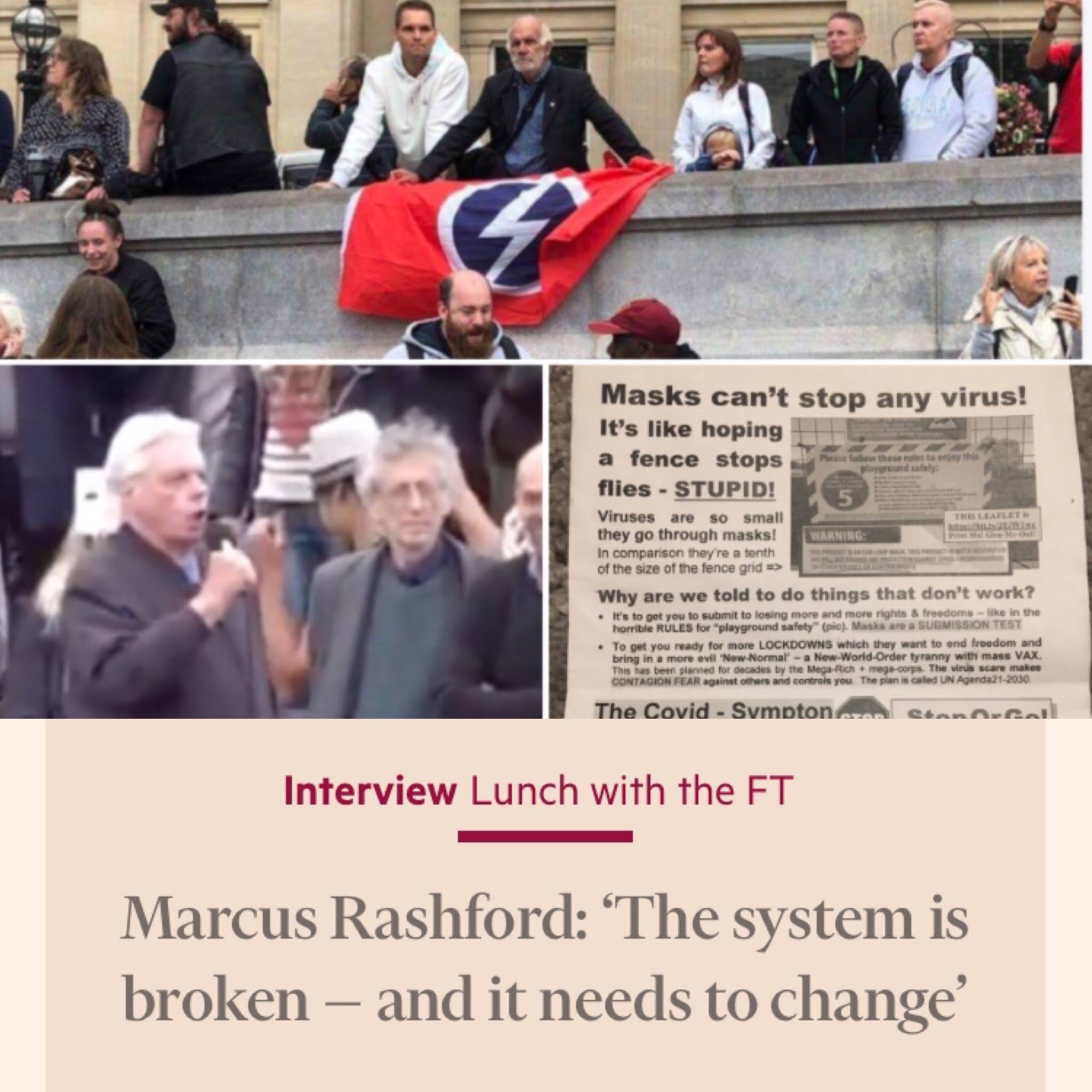 Renew issues its comment on the EHRC Report; excerpt – ‘The case for root and branch reform in Westminster is now painfully clear; our representatives in Parliament should reflect the best UK values, not the worst. Renew calls for more openness and participation in politics at all levels, to prevent this toxic culture from persisting into future generations; we have to be better than this.'
Renew engages in a new partnership with SOCINT. In the words of its founder, "The aim of our co-operation is to enhance our access to and understanding of data, from electoral results and opinion polls, to surveys and social media. This will drive our understanding of the electorate and threat/risk in real-time. Actionable insights will inform our Strategic Communications, ensure we are leading the conversation on issues the electorate truly cares about, and allow us to deploy cost-effective tactical responses at all levels. Strategic campaigning done ethically will reach further, landing our messaging in the right place, at the right time, through the right messenger. As the electorate moves, our insights will allow us to respond. The collaboration will help us attract new members and donors and help us work towards our 2024 goal of winning the General Election and implementing the reforms Britain needs."
Following great work by Heather Astbury and the Comms Team, Renew is featured in the London Evening Standard’s ‘ES’ magazine. Of the five parties profiled (Renew, Burning Pink, Take The Initiative, Reclaim and The Alternative UK), Renew receives the most favourable write-up. They describe our goal as ‘To take on the major parties as equals’.
We launch our campaign to feed schoolchildren at Christmas in partnership with FareShare and go to Downing Street with a gift for the Prime Minister, a copy of Charles Dicken’s ‘A Christmas Carol’.
Kam Balayev writes on how London can rival Silicon Valley, Gary Burke writes on how the HMRC is not fit for purpose and Draeyk van der Horn writes on UK farming and the Agriculture Bill.
Our live interviews continue with Gary Burke on business, Kam Balayev on his London Mayoral campaign, June Davies on Wales and Education, Alex Haida on Europe and Nick George on current affairs. 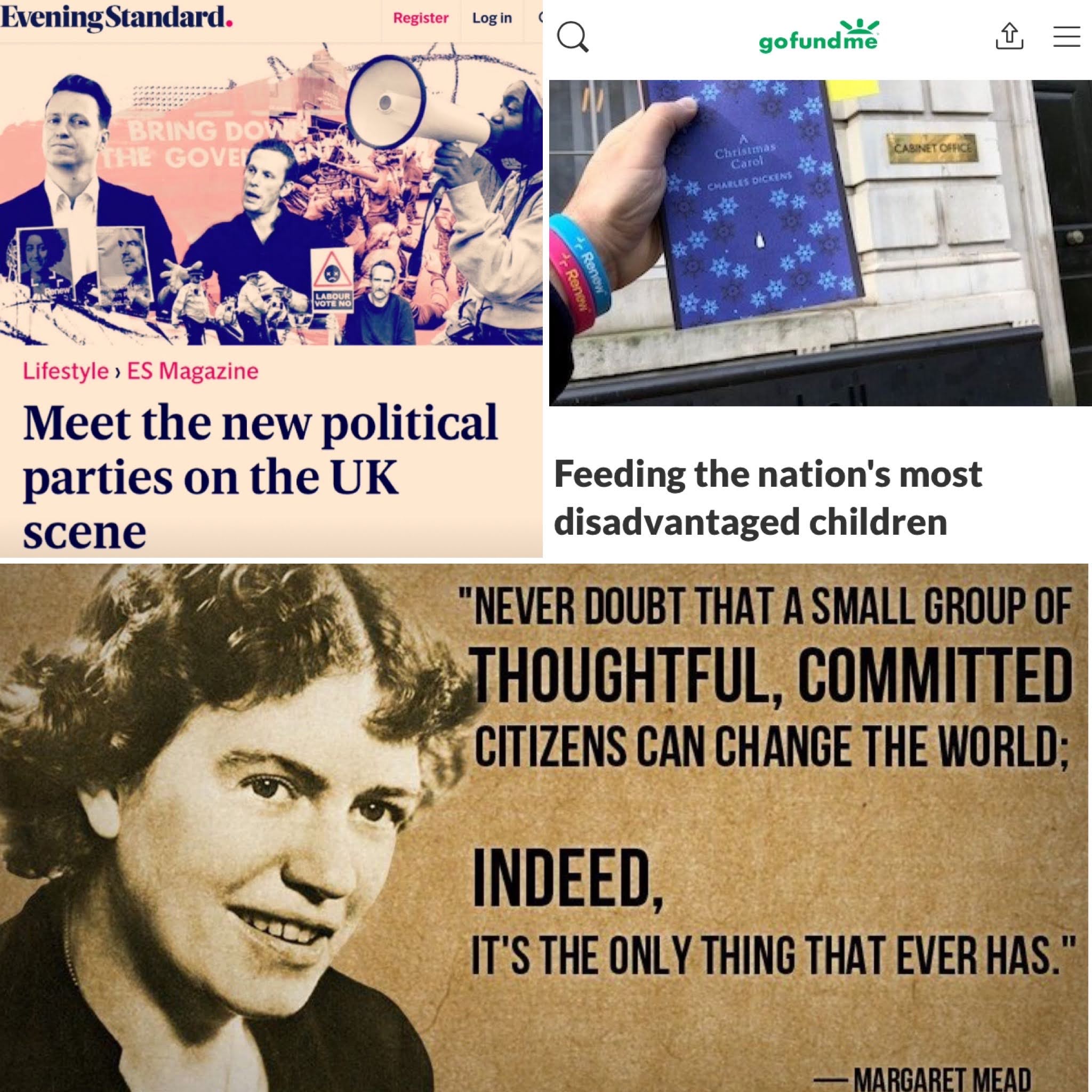 Renew’s long planned guerrilla campaign to highlight the need for reform is postponed by the sudden announcement of a new lockdown. The plan to project a Renew message on the side of parliament was inspired by harnessing Guy Fawkes Night as the day when we reflect on the relationship between the Government and the governed.
Using similar techniques to the excellent 'Led By Donkeys' campaigns of recent years, the aim was a positive and inspirational call for reform and renewal of our Parliament and our political system, encouraging political participation across the spectrum, from all backgrounds, with the Renew Party as the open platform for change.
Instead we posted images and video of the planned campaign across our social media channels, which were very well received.
Renew reacts to news that Nigel Farage plans to rebrand The Brexit Party as 'Reform UK' by making an official complaint to the Electoral Commission on the basis of potential confusion to the electorate due to the similarity of its name and party colour. Numerous examples of existing confusion are cited. Our letter is made public and is shared by Open Britain/Democracy Unleashed to its 141k followers and our corresponding social media numbers are greatly boosted.
In conjunction with SOCINT we launch a new national survey to gain a better understanding of what really matters to people up and down Britain.
Renew launch a crowdfunder for our Internship & Training Programme.
Interviews are conducted live with new CEO Tom Meek and law spokesperson Haseeb Ur-Rehman. 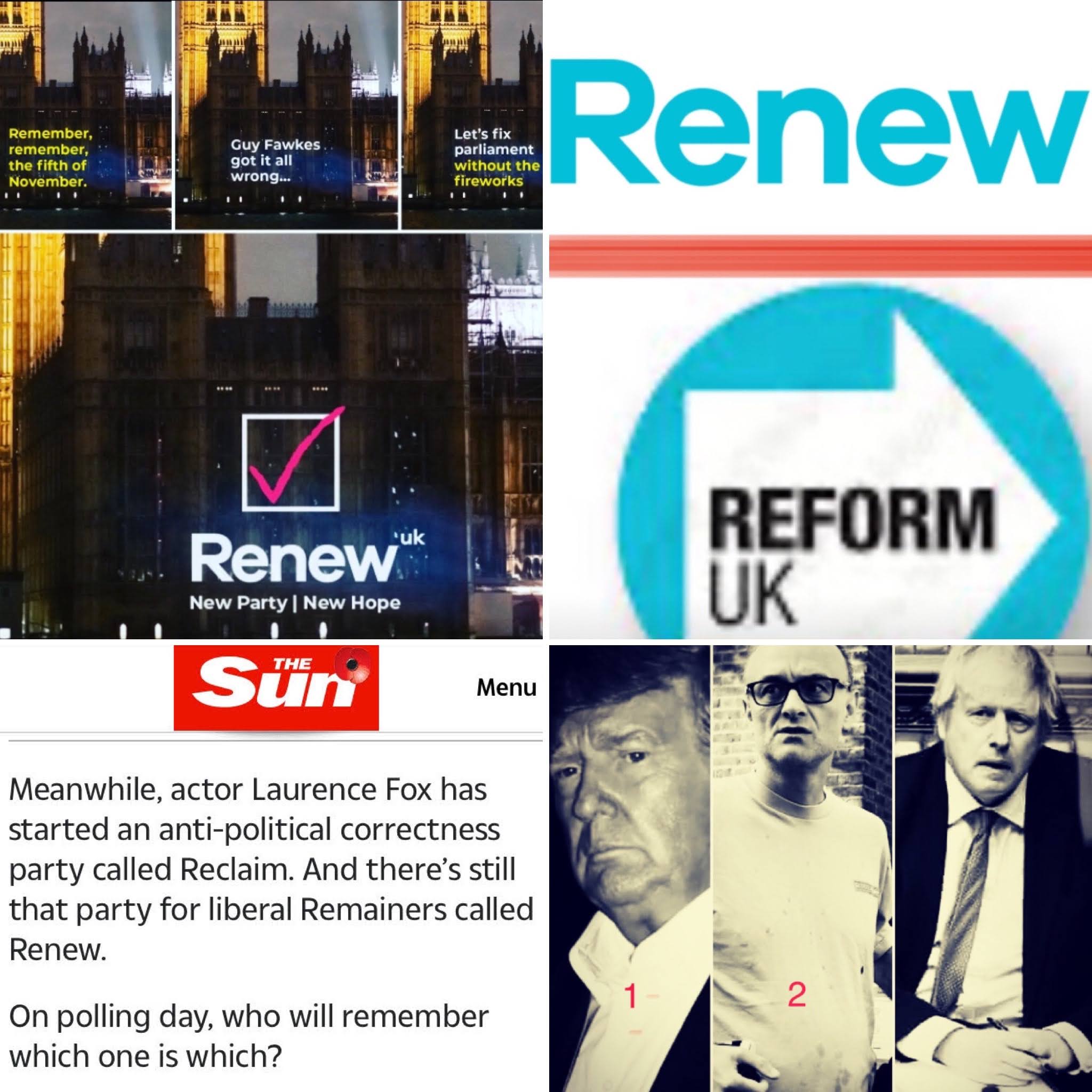 Renew Roots is launched as a grassroots platform for Renew members and supporters to promote and discuss ideas and to share them with the broader electorate. Managed by Alex Gunter and the Renew spokespeople, the facebook group grows quickly and becomes a fruitful source of ideas and debate.
Renew’s membership drive continues with letters from the Chairman sent to lapsed members and supporters who have not yet joined our membership scheme.
Terry Knott sends a personal appeal to all Renew supporters who live outside the UK to join him in his efforts to supports Brits abroad and to grow Renew.
Live interviews are conducted with Jyoti Dialani, Haseeb Ur-Rehman and Kam Balayev on the topic of Human Rights. 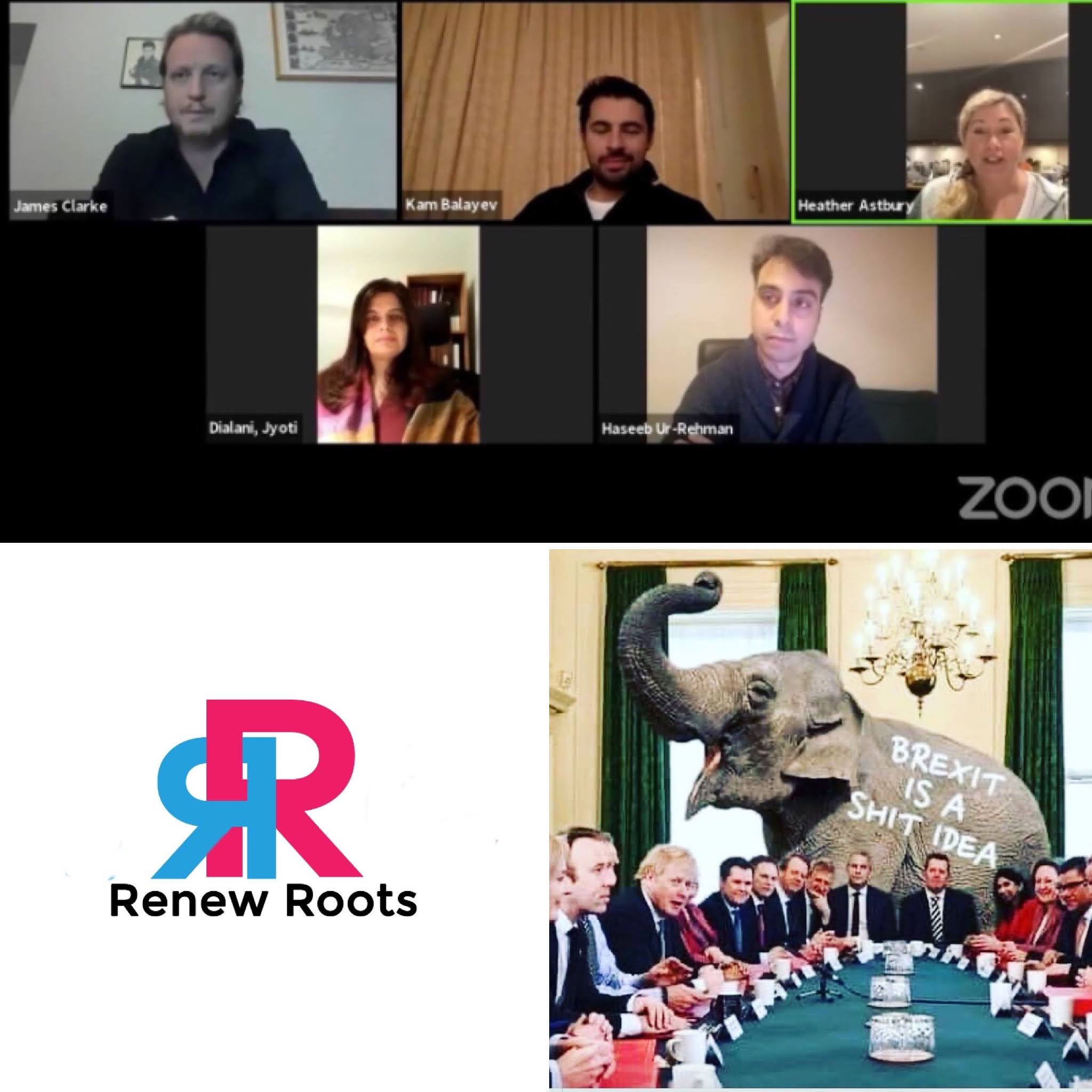 Wow, what a year. If you have managed to absorb all of that info and are still reading, then I hope you will appreciate the colossal effort it takes to build a grassroots party.

Please now help us to continue in 2021 by becoming a member, renewing your membership, or simply making a donation.