You come at the king, you best not miss...

Once again, reports are emerging that Boris Johnson may be on his way out. A recent poll shows that, the popularity of the Conservative party outside the major English cities notwithstanding, Johnson's personal popularity, or more specifically, faith in his leadership, appears to be in a downward spiral. The figures show that 72% of voters would like to see the PM gone by the summer of 2023, which is quite startling for a politician who delivered an 80 seat majority a mere year and a half ago. It may even be unprecedented.

Of course, we have been here before. Almost exactly a year ago, Dominic Cummings' notorious father-in-law claimed, rather boldly, that Johnson would be gone within six months as a result of lingering Covid symptoms and boredom with the job. This did not transpire, of course, and it begs the question, how much of this is wishful thinking, and how much of it may be strategic stories placed in newspapers by people who are after Johnson's job? It may not be entirely coincidental that the poll, by JL Partners, compared Johnson's ability with that of his main rival, Rishi Sunak, who has pointedly refused to deny that he has designs on No.10.

Sunak, whose stupendous wealth ensures that he would be able to pay for his own curtains, trounces Johnson handily in the poll by 42% to 24% on making the best PM, 58% to 15% on running the economy, and very similar figures for handling the NHS, foreign affairs, schools, law and order etc etc etc. Dethroning a sitting PM, of course, can be a risky business, as Johnson will remember after his shambolic betrayal by Michael Gove back in 2017. Sunak will certainly be aware of Omar Little's deathless aphorism, "You come at the King, you best not miss." 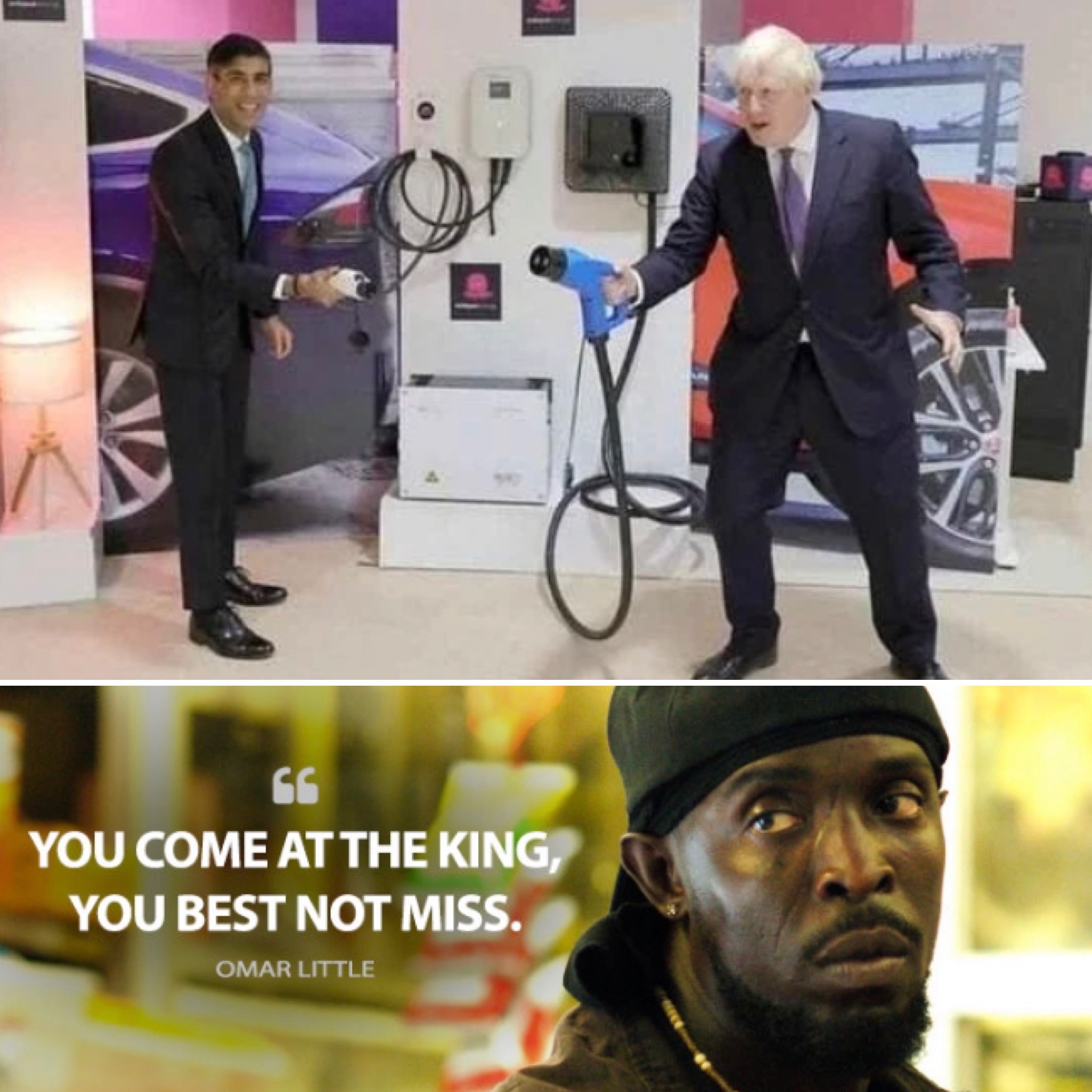 It may be that the public is simply getting bored with the Johnson cabaret. What appeared delightfully refreshing on Have I Got News For You twenty years ago may be wearing thin after a Brexit/Covid double-whammy that appears only to have benefitted the super-wealthy, personal friends of Cabinet ministers and those who, famously, bet against the UK.

Johnson's spectacularly misjudged gag about Thatcher closing the mines in order to get a head start on de-carbonising the economy is precisely the kind of thing that might tip the balance on Johnson in the public's minds. It certainly won't endear him to the Northern Labour voters the Conservatives are (theoretically) courting.

We have spoken here before about 'Sleaze', (better called 'Corruption') and the corrosive effect it tends to have, particularly on parties that have lingered in power for too long, and it appears that the well of Tory scandal is far from exhausted. The most recent burgeoning scandal is a classic oldie-but-goodie - dodgy donations. In addition Ben Elliot and the secret Tory donors club, a story broken by the excellent investigative team at the Financial Times, there are more reports of Russian and Middle Eastern money funding the Conservatives, plus a sudden flood of cash in the last 2 years from property developers, linked to the controversial new planning bill. We appear to have become so inured to this that the news of former PM David Cameron earning $10m from Greensill capital for lobbying his former colleagues scarcely raises an eyebrow.

Looking at the brazenly corrupt system of political donations and professional lobbying in the US political system, is there any good reason that we should be replicating it here in the UK? Why, in fact, are private donations to political parties allowed at all? Any system that allows the wealthy to buy influence at the expense of others is corrupt by its very nature. The British public may have been sold a number of fibs in recent years but no one believes that these people are giving to the Conservative party out of a sense of altruism.
In terms of political reform, party funding is an issue that ought to be front and centre; it is in fact a colossal scandal hiding in plain sight. Like many of the most frustrating problems facing the UK, it appears to go unchallenged through inertia; if one were to design and build a political system from scratch, allowing political influence to be peddled for cash, would certainly be outlawed, and yet, here it is.

If Johnson does end up being pushed out in favour of Sunak, as appears likely, either sooner or later, then the Chancellor will have a hell of a job rehabilitating the party's reputation. Whoever is leader of the Conservatives come the next election will certainly have a tougher battle on their hands than when they faced everyone's favourite opponent, Jeremy Corbyn. Many will feel that the best possible outcome would be a stalemate, and a hung parliament, where voices from Scotland, from Wales, and from the smaller parties might be better heard. We at Renew will continue to build to the next election and aim to make as big an impact on the result as we can. The status quo is not sustainable and after the double traumas of Brexit and Covid, the time for something new is now ripe.