Bark at the moon

On Wednesday the Government published its Internal Market Bill concerning state aid and the movement of goods from Great Britain to Northern Ireland and onwards to the Republic of Ireland. And it was a corker, contravening our Withdrawal Agreement with the EU, breaking international law, threatening the Good Friday Agreement, undermining the Union and jeopardizing any future trade agreement between the UK and the US.

As has been excruciatingly clear for many months and years, the UK is in a bind. It cannot pursue Brexit without either causing massive economic pain or causing historically dangerous political upheaval. But through a combination of incompetence, bloody-mindedness and magical thinking, it now appears to be capable of doing both. The EU is being asked to act against its own interests and throw the Republic of Ireland, a member state, under the same bus that the Conservatives threw Northern Ireland (the red one, you may recall). And all this in order to help Johnson out of a hole, so that he can protect his job and further undermine the EU. It's rather a ballsy (or stupid) request, like a burglar asking you to cut him a spare key.

The illegality of the move was helpfully confirmed by Northern Ireland Secretary Brandon Lewis, who attempted to sugar the pill by saying they only plan to break the law in a “very specific and limited way.” That is, we intend to burgle your house, but only for the cash and jewellery.
Predictably and delightfully, the twittersphere went to town on Lewis and the idea that it's ok to break the law... just a bit. 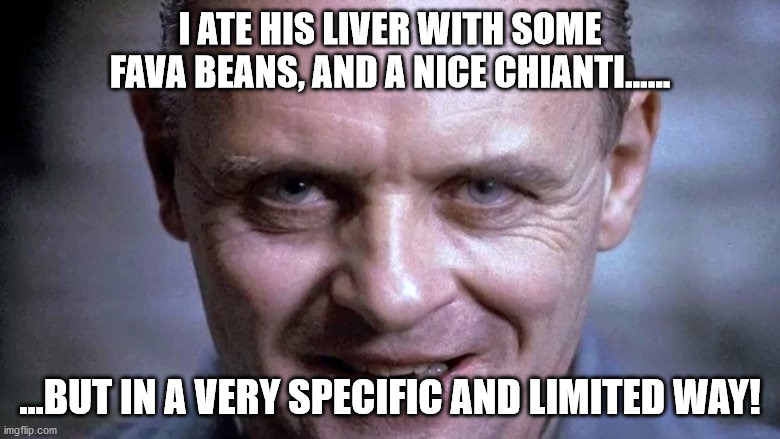 The Gov't position, as articulated by Hannibal Lecter (Cons)


Across the Atlantic, the U.S. Speaker of the House of Representatives Nancy Pelosi poured further derision on the bill: “If the U.K. violates that international treaty and Brexit undermines the Good Friday accord, there will be absolutely no chance of a U.S.-U.K. trade agreement passing the Congress. The Good Friday Agreement is treasured by the American people and will be proudly defended in the United States Congress.”
Not content to offend just the EU, the Irish and the Americans, the bill is also an affront to the interests of the Scottish and Welsh devolved assemblies.

It interferes with state aid rules that were formally devolved to Edinburgh and Cardiff in the 1990s and is effectively a power-grab by Westminster. Nicola Sturgeon cited an example: under these rules, Scotland would have been unable to employ its policy on minimum alcohol unit pricing, which has been successful in raising revenue and improving health outcomes north of the border. The Scottish and Welsh assemblies have hitherto had autonomy to direct EU funding as they see fit, but under new plans for a 'Shared Prosperity Fund', they would have to go cap in hand to Westminster and to a Conservative government that, importantly, neither nation voted for.

Johnson and Cummings have always been happy to act recklessly in ways that upset half the country, but as the Brexit promises evaporate and the dishonest compromises come apart at the seams, they are now seen to be threatening aspects of life treasured by the vast majority of the UK, namely, peace and security in Northern Ireland and the integrity of the Union. It is telling that commentators including the FT are now talking about the acceleration of the break-up of the Union, rather than the possible risk.

The parts of the country that didn't vote Conservative or to leave the EU are being asked to compromise, to pay and to bend over for the parts that did. If anyone has any ideas on how to solve this cheerless equation, please put them on a postcard and mail it to 'Department of Misfits & Weirdos (DOM-AW), c/o 10 Downing Street, London' or throw it directly in the bin, which will be faster and more effective.

It is the philosophy of this government that, 'When you're in a hole, keep digging', then tell people that there is no hole and that, in any case, it was the remainers, foreigners and gloomsters that dug it.

In other news, the government plans to expand COVID-19 testing to 10 million a day, despite the fact that, 8 months into the crisis, we are currently struggling to carry out 175,000 a day. The plan is called 'Operation Moonshot', which is meant to sound cool, like NASA, but doesn't. The term 'moonshot' is mostly used in tech start-ups, to describe 'an ambitious, exploratory and ground-breaking project undertaken without any expectation of near-term profitability or benefit and also, perhaps, without a full investigation of potential risks and benefits.' Welcome to the Petri dish.

To paraphrase Oscar Wilde, we are all in the gutter but some of us are gibbering at the moon.