On August 26th, 2016, during a preseason game against the Green Bay Packers, NFL Quarterback Colin Kaepernick remained seated on the bench during the playing of the national anthem.

“I am not going to stand up to show pride in a flag for a country that oppresses Black people and people of color. To me, this is bigger than football, and it would be selfish on my part to look the other way. There are bodies in the street and people getting paid leave and getting away with murder.”

A US Presidential nominee called Donald Trump went on radio and said, "I think it's a terrible thing. Maybe he should find a country that works better for him. Let him try. It won't happen."

At the G20 summit, President Obama was asked about the topic, he responded,"He's exercising his constitutional right to... make a statement. I think there's a long history of sports figures doing so."

Donald Trump went on to become the President. Kaepernick's contract was not renewed.

On Sunday 6th June 2021, in Middlesborough, UK, players representing the England national team were booed by fans for taking the knee before a friendly game against Romania. It was the second time in a week.

Lee Anderson, the Tory MP for Ashfield in Nottinghamshire took to facebook over the matter, suggesting that a 'political movement' risked alienating 'traditional supporters' - “For the first time in my life I will not be watching my beloved England team whilst they are supporting a political movement whose core principles aim to undermine our very way of life,”

Anderson was one of many people deliberately mischaracterising a simple act of human solidarity as a radical leftist political statement. The idea that multi-millionaire footballers and their backers in the football industry were somehow the vanguard of a Marxist plot was so palpably absurd that it made for some excellently satirical commentary in the media, notably by notorious photoshop artist Cold War Steve and the sublimely talented cartoonist David Squires. 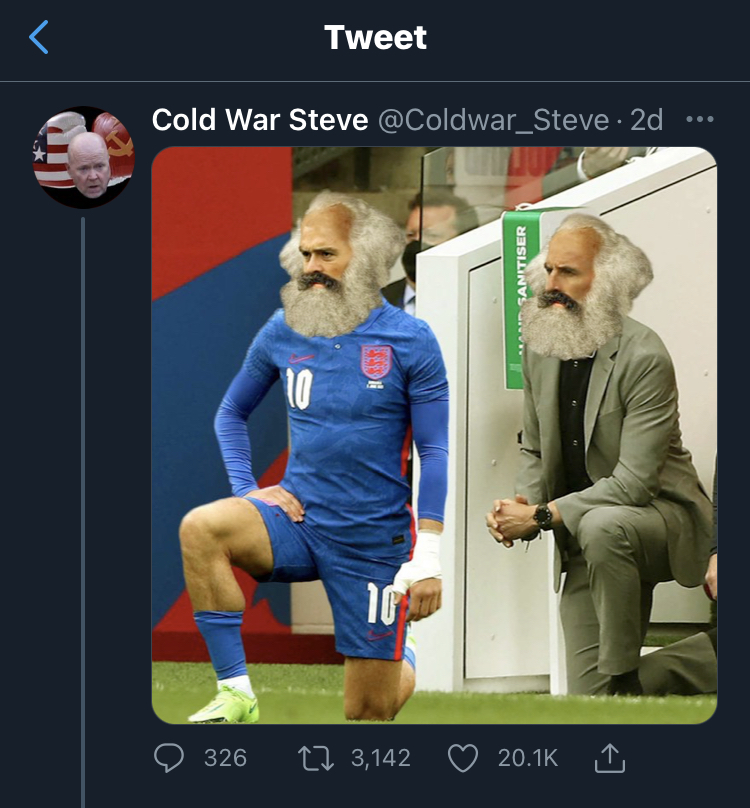 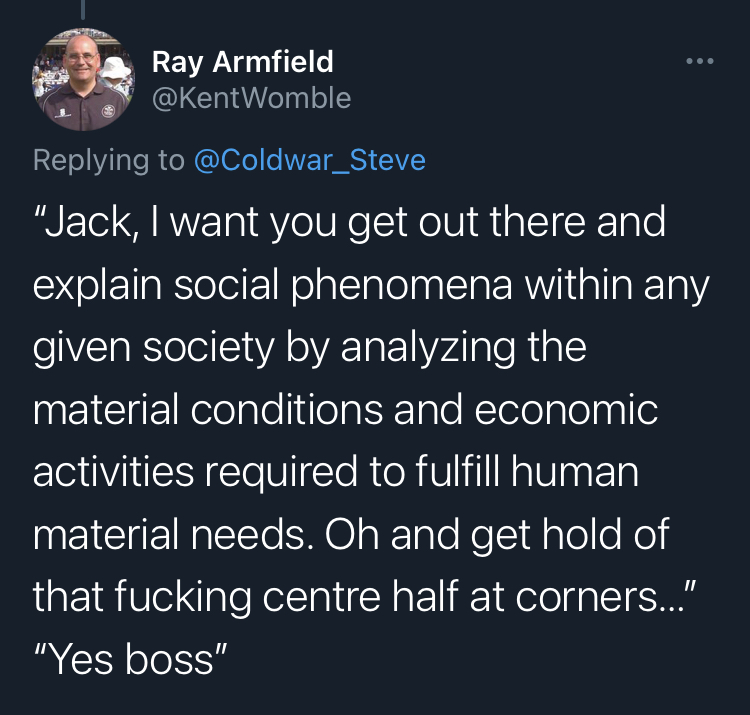 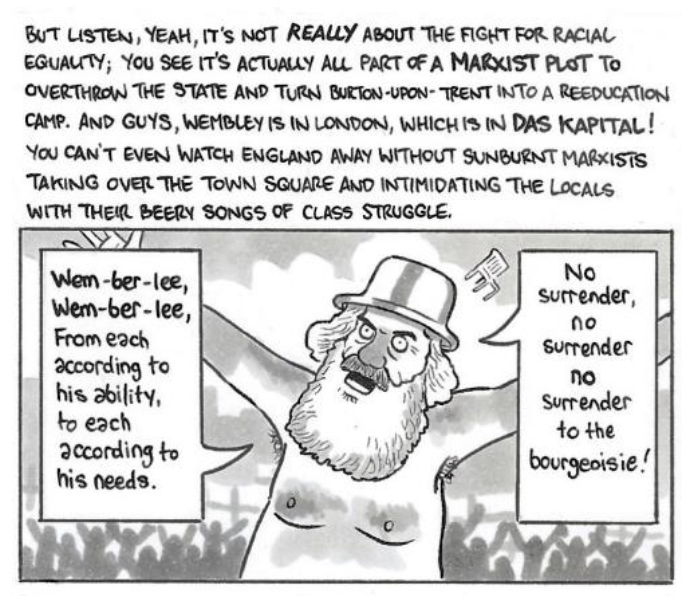 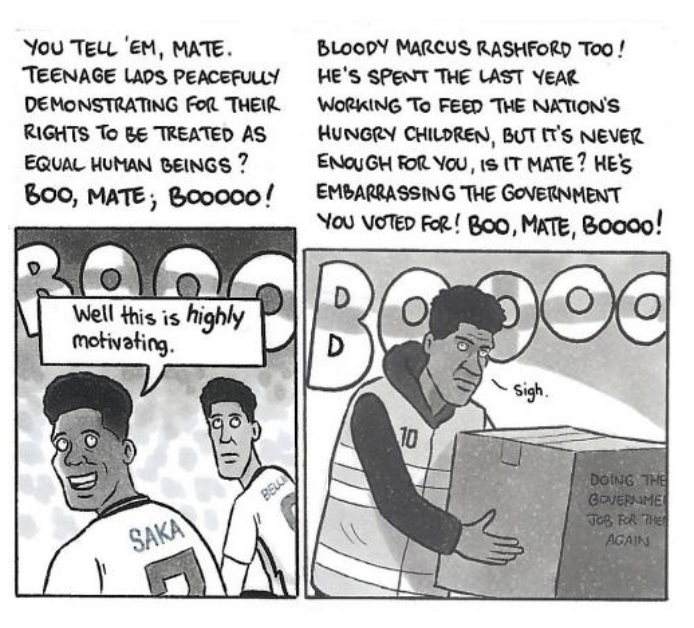 Much of the criticism of sportspeople comes from those suggesting that politics does not belong in sport. This is, of course, nonsense. Well-known people from all walks of life use their fame as a platform to promote political causes, from actors in anti-war protests to the long-lived and admirable 'Rock Against Racism' movement.

Let's remind ourselves of some of the notable instances where politics and sport have intersected.

At the 1936 Olympics, the Nazi depiction of ethnic Africans as inferior was dispelled by Jesse Owens' four gold medals.

The same year Joe Louis twice fought German boxer Max Schmeling, who had been lauded by the Nazi Party as a heroic symbol of German destiny and Aryan supremacy. Louis won the second fight in a first round knock out and he became the focal point of anti-Nazi sentiment leading up to World War II. "I knew I had to get Schmeling good. I had my own personal reasons and the whole damned country was depending on me."

In 1967 Muhammad Ali refused to serve in the Vietnam War, with the unforgettable quote, "I ain't got no quarrel with those Vietcong...no Vietcong ever called me nigger."

At the 1968 Mexico Olympics American sprinters, Smith and Carlos took to the medal stand at the Mexico City Olympics and raised their gloved fists in a Black Power salute. They were booed out of the stadium and expelled from the Olympics.

At the 1972 Munich Olympics, several athletes of the Israeli Olympic team were killed in an attack by Palestinian gunmen of the Black September terrorist organization.

During the Cold War, the 1980 Moscow Olympics were boycotted for political reasons by the US and the Soviet Union followed suit at the 1984 Los Angeles Olympics.

'Cricket Diplomacy' has been a feature of India - Pakistan political tensions and has been both a tool of diplomacy and a bellwether of the state of relations over the years.

The famed 'Old Firm' of Celtic vs Rangers has always been thoroughly infused with political, religious, sectarian loyalties, often breaking out into violence.

France's 1998 World Cup-winning squad, nicknamed, 'The Rainbow Team' and made up largely of players with heritage in Algeria, Ghana, Guadeloupe, New Caledonia, Martinique, Basque country and Armenia represented a breakthrough on perceptions of race and national identity in France.

On the right, in 2013 French footballer Nicolas Anelka was banned for five games for performing an anti-semitic 'quenelle' salute. He was later fired by his team, West Bromwich. Other players, including Paolo Di Canio and Giorgos Katidis, have also been suspended for fascist salutes.

Throughout 2020 Manchester United striker Marus Rashford repeatedly shamed the government into backtracking on school meals. “The director of communications said to the prime minister twice: ‘Do not pick a fight with Rashford’,” Dominic Cummings told MPs last week. “The prime minister decided to pick a fight and then surrendered twice.”

Just last week it was revealed that Ukraine's Euro 2020 football kit contains a shadow of a country map including the Crimean Peninsula annexed by Russia in 2014. In an entirely predictable response, cowardly UEFA officials have caved in to Russian protests and, shockingly, have ordered Ukraine to change its kit.

On a lighter note, the Silver Screen has also reflected these powerful themes: who can forget the allied POWs playing the Nazis in the superb Escape to Victory, or Rocky Balboa's epic fight with Ivan Drago in Rocky IV?

The list of noted sportspersons who have gone onto careers in politics is shocking long and includes cricketer Imran Khan, President of Pakistan, Manny Pacquiao, Senator in the Philippines, George Weah, President of Liberia, Jessie Ventura, Governor of Minnesota, Pele, Brazillian Minister of Sport, and in the UK Seb Coe, MP for Falmouth.

Aside from the fact that, like it or not, politics and sport have always been closely intertwined, what can we learn from this? Well, from the above examples, and with a few notable exceptions, political interventions by sporting figures have been broadly positive and notably progressive, often ahead of their time, and frequently bringing about overdue reform. It will not have escaped your notice that the responses to these interventions by the professional political classes have often been shameful and reactionary, with daft Lee Anderson being the latest in an extremely long line of politicians on the wrong side of history, that is, the wrong people, doing the wrong things for the wrong reasons; everything that we at Renew stand against.

The examples set by athletes prove an important point, that when people from outside politics stand up for a cause, or even enter politics as a career, they often bring with them a kind of moral force not found in most politicians. It really underlines Renew's philosophy, that the prescription for a sick political culture must come from without; that deepening and broadening the level of political participation is essential to curing the ills we are suffering, be it tribalism, dishonesty, or corruption. Of course, fixing our broken politics is not simply a personnel problem; root and branch reform are also required, but as so many of these brave athletes have shown, it's not a bad start. Whilst it's easy to scoff at footballers making political statements, a lot can be learned from the people at the very top of this most meritocratic of careers. As Jurgen Klopp (and Carlo Ancelotti and Arrigo Sacchi) said, football can be “the most important of the least important things”.

Following the controversy of the booing of England players, Gareth Southgate took it upon himself to write a heartfelt letter to 'England'. In it, he states, 'Our players are role models. And, beyond the confines of the pitch, we must recognise the impact they can have on society. We must give them the confidence to stand up for their teammates and the things that matter to them as people. I have never believed that we should just stick to football... Why would you choose to insult somebody for something as ridiculous as the colour of their skin?.. I understand that on this island, we have a desire to protect our values and traditions — as we should — but that shouldn’t come at the expense of introspection and progress.'

When politicians are taking lessons in decency from football managers, we can see that it's time for something new.