I was recently chastened by one of our good and patient readers for focusing on, 'vitriolic description of what the other parties are doing wrong' in last week's briefing, Patriot Games. It's a perfectly fair point to make and the gentleman was not the first to make it. Mind you, trying to write about current affairs in recent years without employing vitriolic descriptions of what the other parties are doing wrong would require an almost heroic amount of restraint, and most weeks I simply can't muster it.

However, this week, to show that we listen (and also to see if I can manage it), I shall avoid talking about government cock-ups and focus on Renew, not least because we are approaching the 3rd Anniversary of our official press launch on 19th February 2018. It is also an excuse for me to recycle a piece of writing from our blog archive (which, incidentally, is well worth revisiting, there are currently 34 pages of 6 articles a page, making an impressive 204 articles, all written by Renew supporters and staff).

The following piece can be found on page 22 of the archive, and is entitled 'A Light Refreshment'


On 19th February 2018, Renew was officially launched in front of the world's media at the Queen Elizabeth II Centre in Westminster. 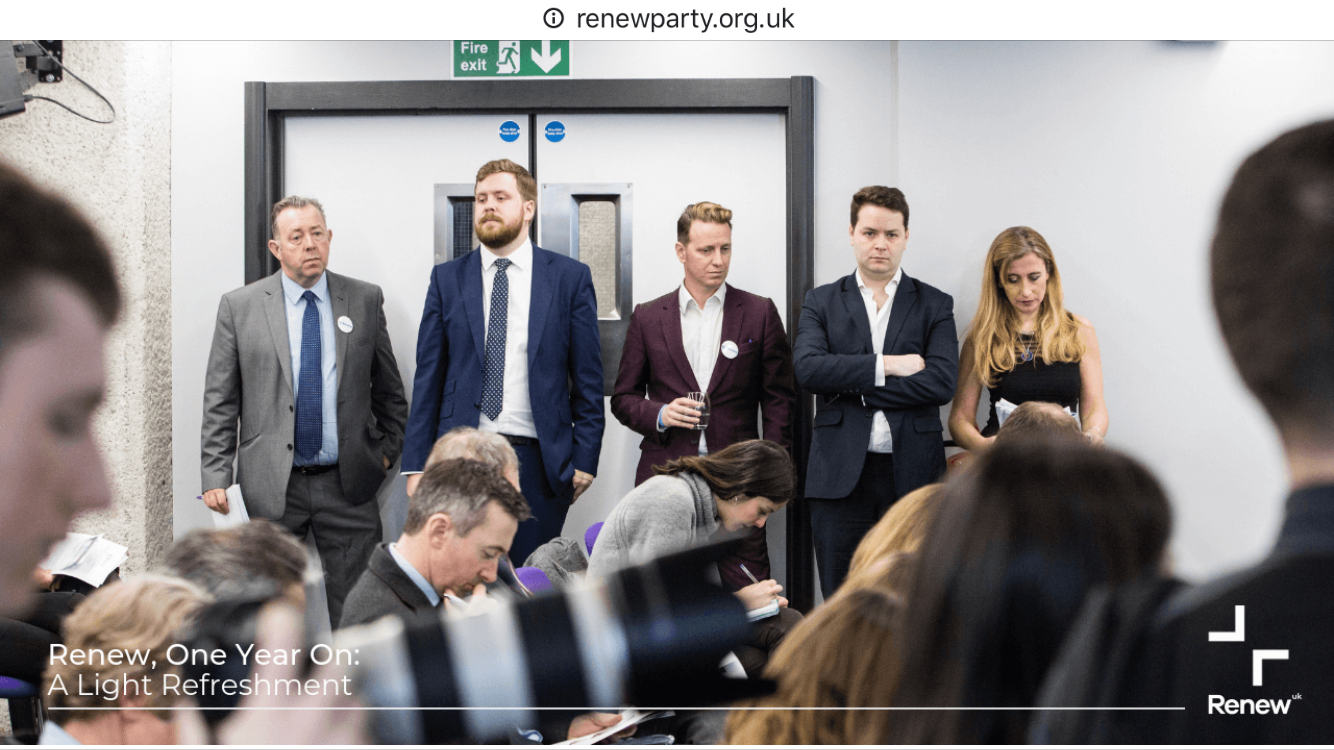 The event itself was something of a blur; the whole team was understandably stressed and nervous as many of the candid images now hilariously testify.

We waited nervously for the room to fill up and were extremely glad to see cameramen from BBC, Reuters, AP, and representatives from across Europe all the way to Japan. We also learned an important lesson: always book a room too small for your purposes. Although we had over 80 journalists, photographers and candidates from dozens of countries present, our friends at The Sun felt compelled to point out that the room was not quite full by the end. Politics is an unforgiving business.

Once the event got underway, things went fairly smoothly, with two quite amusing exceptions.

Sandra Khadouri and I gave our speeches first, followed by James Torrance. James then stepped off the podium in order to give an interview to the Daily Politics, who were waiting outside. Once in front of the cameras James was confronted with the accusation that he had stormed off the stage in protest. 'No', James responded calmly, 'That was me stepping out briefly to talk to you!' 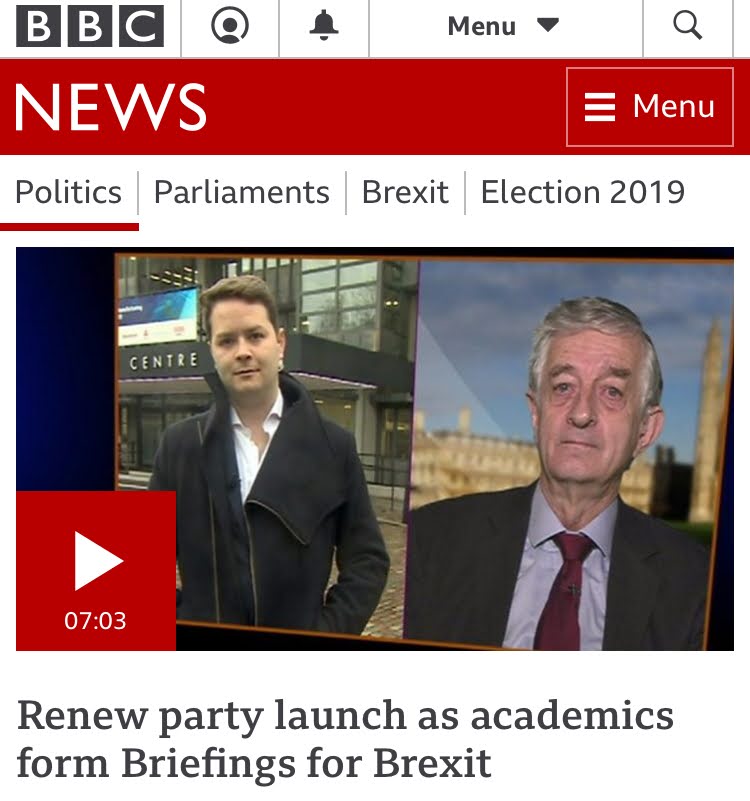 Storm in a teacup averted, we moved on to the press conference Q&A. The questions were thoughtful and fair, our answers reasonable and considered - with one notable exception. In a line I had already used many times in private and public meetings I referred to Renew as “like the military arm” of the Remain movement. It was a throwaway comment, referring to the fact that we were standing candidates rather than just marching, but the assembled press pricked up their ears; they had their headline.

Later that day, the articles began to be published. The picks of the bunch were the The Sun, who called us “Saboteurs”, and Breitbart reported that “Globalism Strikes Back!” For a short time, I was not the most popular person with our comms teams and vowed never to utter the infamous phrase ever again (although I was privately thrilled that we were being taken seriously by the other side).

Happily, scores of other moderate news outlets were very sympathetic and overall we were extremely happy with the outcome. The New European, The Independent and The New Statesman all wrote approving profiles, as did Le Figaro, El Pais and Il Folgio in Europe.

In the following days we had over 600 new candidate applications (briefly breaking the website) and a newfound credibility.

It seems like a decade ago, so much has happened since that day. We visited (almost) every corner of the country, addressed the Cambridge Union and St. Andrews' LaFayette Club amongst many other universities and public meetings. We stood in local elections (and got our first 2 elected officials in John Bates and Eric Cooper), came within a whisker of toppling the bigger parties in Newport West, formed a temporary (and awkward) alliance with Change UK and provided 6 candidates for the EU elections in 2019, we faced down a braying Brexit Party mob and got too-close-for-comfort with the odious Katie Hopkins and the also-odious Nigel Farage in Peterborough. We entered into the Unite To Remain alliance in good faith at the General Election in 2019, standing down 49 great candidates, only to be let down by the mendacity of the other parties in that alliance. We have stuck to our guns, stuck together as a unit, and started recruiting some amazing talents from both within our ranks of members, but also newcomers who have been impressed by our approach, our platform and our resilience.

As a party that prides itself on evidence, realism, expertise and competence it is sometimes dispiriting to see the breathtaking shenanigans of our elected officials in parliament and to reflect on the long, hard and often thankless task that we at Renew have set for ourselves. I am reminded of a recent column by the brilliant Marina Hyde of The Guardian who suggested, tongue-in-cheek, that since at least the 80s, the UK electorate has displayed a marked preference for drama and nuttiness in their politics, asking, 'The lawyerly Labour leader may think the public want calm and competence, but has he met them lately?'

We have knocked thousands of doors and met some of the most delightful people imaginable, and also, inevitably, a few eccentric ones. I will never forget the gentleman in Newport High Street who assured me that Brexit was mandated in the new testament and, further, that he could even show me which page it's on, and then strode off home to fetch his bible. Or the extremely confident man in Peterborough who told us that he had "solved Brexit" with a plan to merge the Republic of Ireland into the UK and then to merge that entity into the EU and, then "to see how it goes in five years". When we pointed out that the Irish (and the EU) might have something to say on the matter, his immortal reply was, "well... have we asked?"

Naturally we have good days, bad days and also days when we have to remind yourself why we are doing this. But a key characteristic of a champion is the ability and the desire to get back up after every blow and to, 'meet with Triumph and Disaster, And treat those two impostors just the same', just as Kipling proposed.

As we approach the third anniversary of our launch, it's important to realise just how far we have come, from a motley crew of independent candidates and complete strangers to a nationwide network of volunteer activists, spokespeople and candidates, ready and willing to stand for office in elections at all levels. It's quite an achievement, especially when we look at the other small parties that were mooted, rumoured, half-launched, collapsed, imploded or remained anonymous. We've learned that we have to fight twice as hard as any other party for every bit of press, every interview, every hustings, every glimpse of recognition and we cannot rely on the support of campaign groups, think-tanks, billionaire benefactors or even a proportional voting system to help us; we have to do this ourselves, 'we happy few', as our Chairman wryly notes.

Now is also a good time to thank everyone who has helped us on the first steps in our journey, people who believed in us when no one else did, our first supporters, donors, volunteers and candidates. Everyone who put on an anorak and pushed a leaflet or knocked a door, plus people who drive across the country for the privilege of doing it (you know who you are). Everyone who wrote an article (remember our blog), shared a post, edited a press release, told a friend, attended a drinks event, showed up at a march, shared their expertise, and especially those who brought biscuits. We are on a long road, but we are always moving forward, thanks to you.

There, is that positive enough? Next week, normal service will be resumed.

In the meantime, if you like what you see here, please - Join Us, Volunteer or Donate.