This week, for a change and a brief respite from current affairs (for you and for me), I wanted to write a bit about political comedy and satire.
This was prompted by the welcome return of Spitting Image last Saturday and memories of the massive effect the original show had in the 80s and 90s.
Annoyingly, the show is only broadcast on Britbox, a new paid subscription channel, so its audience is likely to be far more limited than in its heyday, when up to 15 million people would tune in to watch it on ITV on Sunday nights.

For those who haven't seen the first episode (which was frantically re-edited at the last minute following Donald Trump's Covid diagnosis), here is the kind of thing you can expect: Priti Patel as a dominatrix (and Michael Gove as her submissive client), Greta Thunberg as a vexed tv weather presenter, Dominic Cummings as an alien with an appetite for babies, Dominic Raab as a moron youtuber and karate fanatic, Johnson as a bewildered child, a crazy Kanye, Prince Harry on the dole, Jacinda Adern as Mary Poppins (rebooting the signature end-of-show song), and Donald Trump employing a part of his body to tweet in the most outrageously revolting way imaginable.
The show has been broadly well-reviewed but with a few critics complaining that some sketches were funnier than others and that not all of them landed as intended. This is inevitable in a show whose DNA is as anarchic and whose targets and themes are as totally scattershot as ever. It's easy to forget that the original was only really funny about 20% of the time, but that wasn't really the point. It was about being scabrous, irreverent, insolent, disrespectful and teaching a generation of people to treat their government, celebrities and royals as ordinary people with weaknesses and bizarre quirks. It's also easy to overlook the fact that culturally, 2020 is an age away from 1984; new taboos and sensitivities have come into play, and comedy has become a far more fraught arena than ever; in a rather odd example of this, execs insisted that carrot leaves be removed from the head of Ed Sheeran's puppet for fear of giving offence.

The best satire has always been even-handed and comics must be able to defend jokes on the basis of being equal-opportunity offenders. Shows like the excellent and underrated South Park have always done this well - skewering America's political idiosyncrasies with a mixture of wry sophistication and blunt force. Creators Trey Parker and Matt Stone wrote that they hated both conservatives and liberals, with Stone famously commenting "I hate conservatives but I really f***ing hate liberals". Parker and Stone's breathtakingly brilliant 'Team America: World Police' pulled off the same trick, with naive, preening, privileged Hollywood liberalism mocked just as ruthlessly as ignorant, insular, hawkish, gung-ho conservatism (not to mention unforgettable characterisations of Kim Jong-Il and Hans Blix).
In the US, Saturday Night Live has done an, at times, excellent job, with Alec Baldwin's Trump impersonation finding its target, not to mention Will Ferrell's superbly dim take on George W Bush. At their respective peaks, Jon Stewart's The Daily Show and Steven Colbert's The Colbert Report were not only essential viewing, but they sparked actual social movements such as the astonishingly successful 'Rally To Restore Sanity'.

Back in the UK, we have a long and proud history of consistently producing genuinely funny political comedy, from Peter Cook's ground-breaking impersonation of Harold Macmillan in Beyond The Fringe through Monty Python, Not the Nine O'Clock News (and Rowan Atkinson's classic Conservative line on curry), Yes Minister, Rick Mayall's preposterously believable Alan B'Stard, Have I Got News For You, Chris Morris' incredibly (and sadly) prescient The Day Today and also his scandalous and virtuoso Brass Eye.
In recent years, the political panel show format has begun to feel stale and the recent criticism of the BBC for producing too much lazy left-wing comedy is not entirely unwarranted, with the likes of Mock The Week and The Mash Report doling up extremely familiar, safe and digestible dollops of university-educated sarcasm, whilst the otherwise incendiary and erudite Frankie Boyle's New World Order show often feels unnecessarily preachy and tediously right-on.

It's extremely important for democracies to foster brave comedy and to tolerate jokes that may be judged to be offensive or accused of being offensive by those seeking to harness grievance as currency. We are lucky to have such a vast pool of comic talent in the UK and it is essential that we nurture it, sponsor it, champion it, revel in it where we agree with it, tolerate it where we don't, forgive mistakes and give comedians the space they need.

The role of court jester was always precarious, but essential. The need to prick the conscience of the king, to explode the vanity of the ruling class, to tell truth to power and to provoke radical, alternative thought, is absolutely key to our cultural health. As a country that produces comedy across the spectrum from Michael McIntyre to Jerry Sadowitz, from Les Dawson to Stewart Lee, from The Two Ronnies to Vic & Bob, to French and Saunders, Peter Kay to Victoria Wood to Eddie Izzard to Richard Ayoade to Bill Bailey to Michaela Coel to Micky Flanagan to Billy Connolly (this list really could go on an on), we should be proud of our cultural heritage and protect the path for the satirists and comedians of the future, because, god knows, we are going to need them.

So, if you get the chance, check out Spitting Image and, if you think you can handle it, there's another real treat coming up.
On October 23rd Borat II lands (aka Borat Subsequent Moviefilm: Delivery of Prodigious Bribe to American Regime for Make Benefit Once Glorious Nation of Kazakhstan).
More than most comics, Sasha Baron Cohen literally puts his life on the line to make us laugh, but also to draw out (often terribly) uncomfortable truths about the society we live in. We should appreciate that and applaud it. 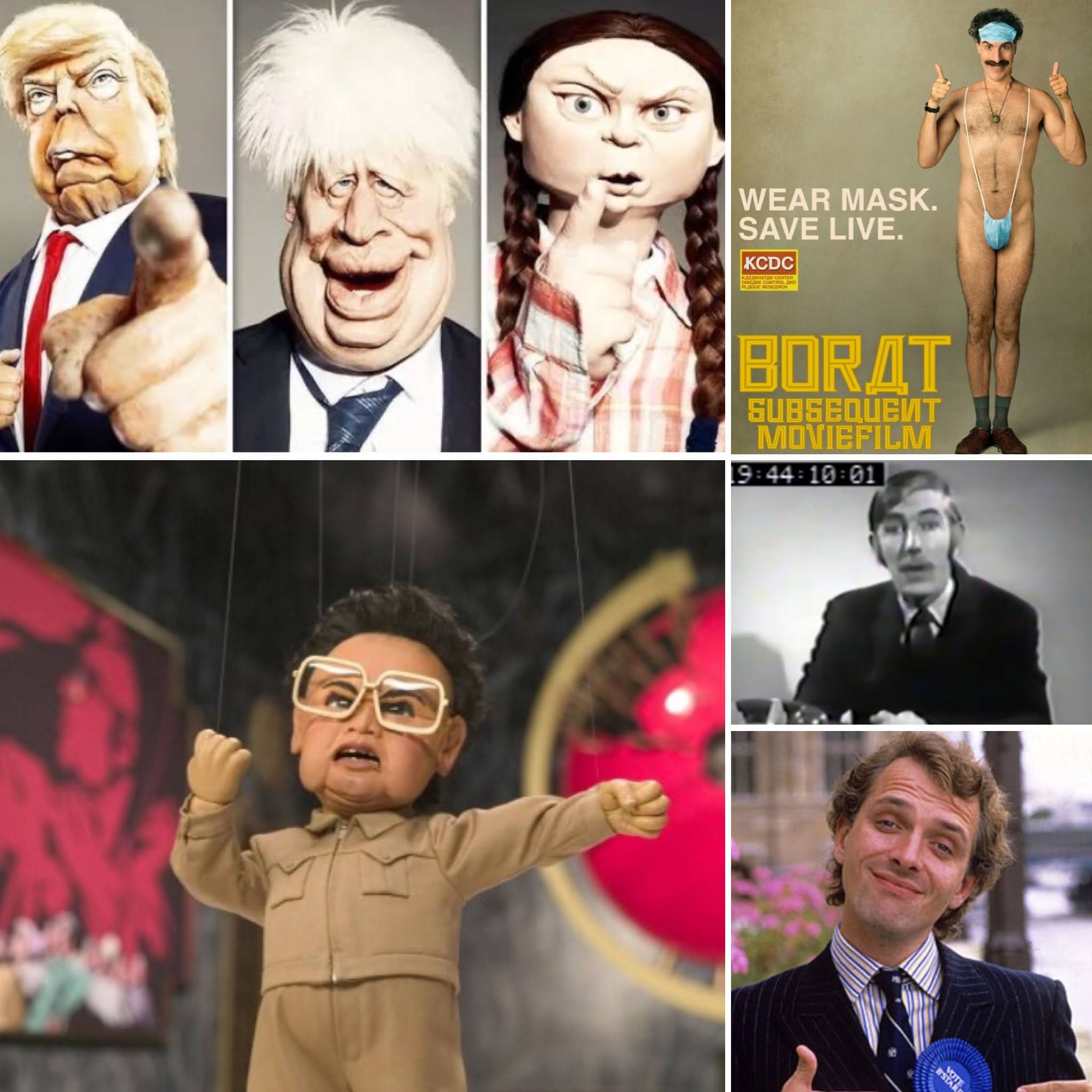