At the end of Wednesday night's game between England and Denmark, straight-talking Lancastrian footballer-turned-pundit Gary Neville made a remarkable statement, live on ITV. In the context of the England team's success and the way they have behaved and comported themselves, he said,
“The standard of leaders in this country the past couple of years has been poor, looking at that man (Southgate), he's everything a leader should be, respectful, humble, he tells the truth.”
I could scarcely believe my ears. In one simple sentence, Neville summed up what I believe half the country has been thinking - 'Wouldn't it be nice if we elected people as decent, honest, frank, and capable as this football manager.'
The differences between the national football team manager and the Prime Minister could hardly be more stark.

Whereas the former built himself up from modest circumstances, with hard work, focus and determination, rather than any outstanding natural gift, the latter has strolled through life, bestowed every advantage, harnessing innate confidence and 'charm' to drive home his privileges at every step.

Where the former inspires confidence, loyalty, belonging and an exuberant team ethic, the latter cobbles together temporary and joyless alliances with those mendacious characters most willing to stab one another in the back in the name of personal advancement.

Whereas the former writes inspiring and heartfelt letters to the nation, calling for solidarity, togetherness and hope, the latter makes his name by penning dishonest, divisive and deplorable diatribes about the EU and (apologies for what is about to follow) 'tank-topped bum-boys', 'piccaninnies' with 'watermelon smiles', Muslim 'letterboxes' and countless other attention-seeking articles unworthy of an elected official.

Whereas the former constantly and consistently makes tough decisions in the face of colossal criticism, in order to do what he believes is right, the latter does or says whatever gets him through the next news cycle, betraying no sign of any philosophy or moral centre.

And Southgate has just the one wife and two children, both of whom he recognises. I could go on.

The reason that this story resonates so much in 2021 is partly down to Southgate's support for his players taking the knee before games and how the political world has responded. A simple act of solidarity amongst athletes from all backgrounds, supporting those who are being abused has been deliberately mischaracterized by contemptible political opportunists as yet more grist to the mill of their culture war. Tory MP Lee Anderson claimed he would boycott England games and Home Secretary Priti Patel supported the booing of England players for what she dared to call, 'gesture politics'. Of course, the success and popularity of the team has meant that these mean-spirited words have backfired. In a shameless but completely predictable move, politicians like Johnson and Patel have sought to wrap themselves in the England flag in order to try and capitalise on the hard-earned popularity of the people they sought to denigrate for political gain. In a move of astonishing hypocrisy, Patel has been tweeting out her newfound love of the team. Many have picked up on the absurdity, not least, that man again, Gary Neville, whose four word tweet-response 'The cheek of you!' was a masterpiece of scathing brevity. 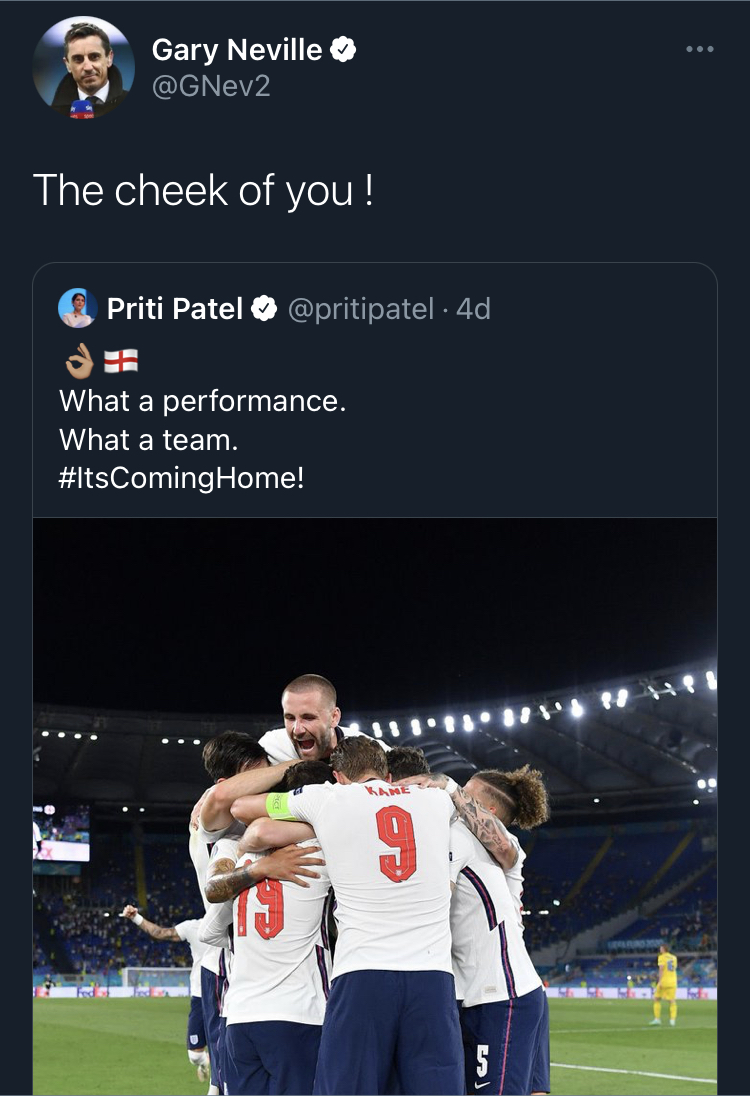 Johnson too, naturally, muscled in on the action, standing on a massive England flag outside No.10 and being pictured with a 'Boris, 10' football shirt this week, to the derision of those who remember, for example, our PM coming off second best to Marcus Rashford for most of 2020. Once again, the satirists responded in droves, notably 'The Poke', which saw the bigger picture. 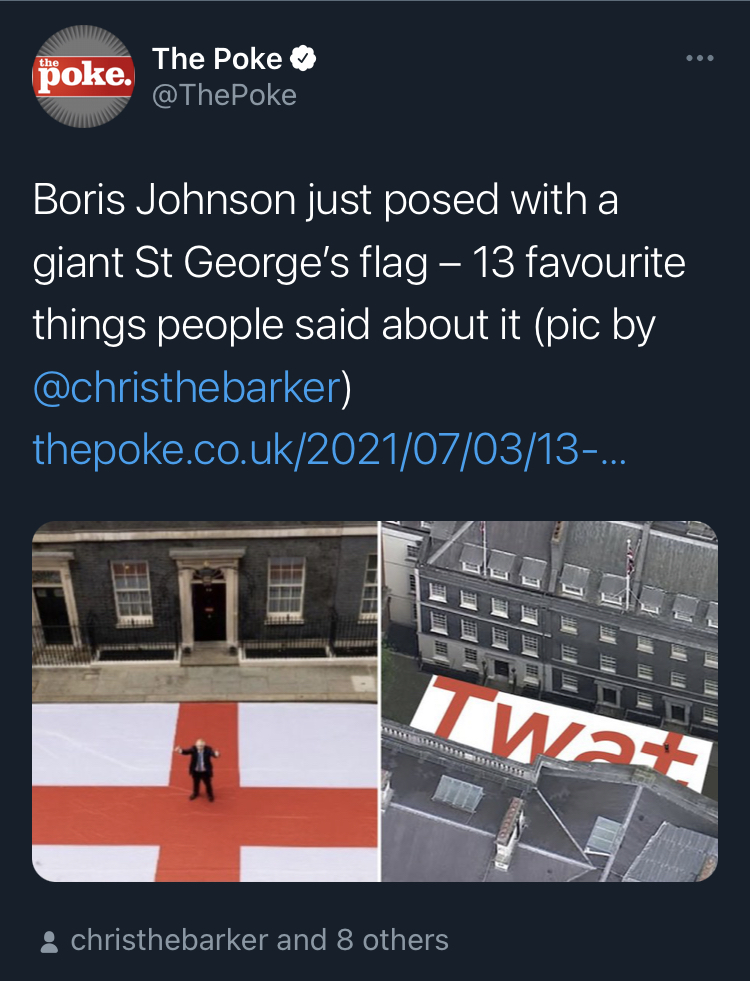 It is often said that the government and its outriders in the media will attempt to use anything at all to feed the culture war that they feel is keeping them in power and dividing the opposition. Football, statues, sausages, The Proms, the flag, fish, masks, you name it. Pollster Frank Luntz was widely interviewed this week on his report into the effects of culture war in the UK and the risks posed by a descent into US style politics. He contrasted Keir Starmer's 'performative' attempts to align with the act of taking the knee, with Southgate's positive approach.

“He defines leadership. If a politician comes to me and says, what should I say, I tell them: be more like Gareth Southgate. He endorsed a common approach that people appreciated. That’s the definition of unity.”
“He wanted to speak in favour of something and not against it. And that is a great way to bring people together. It’s something politicians don’t understand – it’s what you are for, not what you are against.”
His report appears to be both a warning and a signpost. The key for the opposition is not to take sides on politically confected cultural issues, but to find ways of disarming and neutralising them in order to reframe the narrative about issues that people really care about, like jobs, pay and conditions, health, security, food and petrol prices, schools and pensions.
Other key findings were that twice as many people feel that rich/poor is the central division in the UK rather than North/South or Leave/Remain. The survey found that voters in all categories preferred Blair's Labour to both Corbyn's and Starmer's and that people feel increasingly ignored by politicians of all stripes, with a shocking 78% of Labour voters and 46% of Conservatives agreeing that their attitude to politicians was, 'F*** em all'. Quite the survey question...

A central theme was that of fairness, with those on the left and right disagreeing where the unfairnesses lie. Labour voters felt that public spending mostly benefits the wealthy, big businesses and politicians, whereas Conservatives feel that benefit claimants and asylum seekers are the biggest beneficiaries. Aside from the fact that this is a bizarre finding, it underlines the idea that, across the political spectrum, according to Luntz's finding, 'Fairness and equality are essential British values'.
(For those interested, I would recommend spending a few minutes reading the survey summary here).

For Renew, none of these findings are surprising, in fact, they reflect our positions on these issues very well since our launch. A focus on inclusion, participation and reform, the harnessing of skills from people of all backgrounds, promoting a positive vision that brings people together and opposition to attempts to divide the country, all of these things are central to Renew's ethos and practice. Harnessing dissatisfaction with failed parties in an anachronistic and rickety political system that is rigged in favour of two franchise parties, and focussing on reform and fairness, this is precisely why we formed Renew.


A few days earlier, The Times' Matthew Parris wrote an article titled, 'Moderate voters yearn for new leadership', which similarly endorses Renew's approach. He argues that the increasingly hysterical pitch of our political discourse is out of sync with the instincts of ordinary Brits and that the main parties are ignoring them.


'Who and what within our party politics is answering the call of a gentler, more polite, more thoughtful breed of voter? These are men and women, often but not necessarily well-educated, often but not necessarily content with their lot, who are neither rank Tory nor rank Labour nor street-obsessed Lib Dems; they don’t respond to the gracelessness of our politics and are beginning to feel like outcasts, millions of them, from British democracy. I’m one of them. Maybe you are too. Against all denial I insist that there is such a thing as a “moderate” voter and there is such a thing as a tolerant, intelligent centre in politics.'

He wishes for a new party made up not from, 'familiar political beasts', but from 'new people... from wealth-creators, from geniuses in the sciences, arts, sport and information technology, from giants in fields that are not politics.'

Whilst it is frustrating not to receive the recognition we deserve for the work we have done these last three years in building a viable opposition movement, it is nonetheless encouraging to see that pollsters, journalists and even national football managers are on the same page as us. Here's to a victory on Sunday, or at the very least, an honourable defeat conducted by hard-working and decent people with the right motives. If only Westminster were more like Wembley...