This week we learned of the new, new travel chaos unfolding at the UK's most high-tech airport terminal, Heathrow's T5.

T5 is not a new Terminator sequel, but being stuck in a terrifying 1/4 mile long queue there, you could be forgiven for a desire to mete out cold-blooded and systematic destruction on the human race, starting with the cabinet.

The problems were blamed, variously, on arbitrary spot-checks, 14 out of 16 ePassport gates not working, and the fact that the 'Pingdemic' had claimed 80 of the 300 Border Staff scheduled to be working. Measures supposedly put in place to protect people from Covid ended up doing the opposite, with over 500 people crowded together, unable to exit the airport safely. 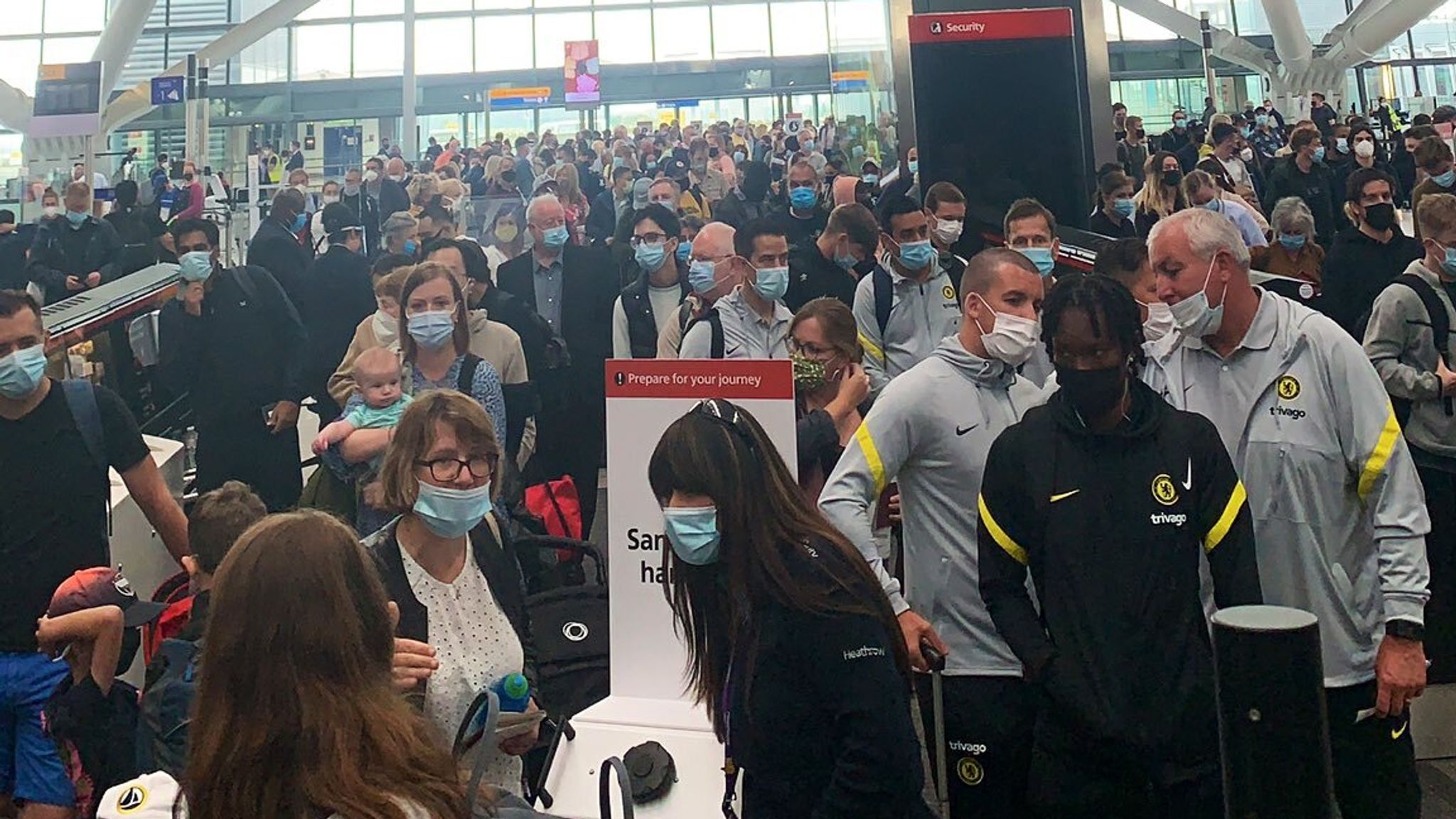 In fact, this was not a one-off, but part of a long pattern of chaos in this Government's approach to travel and borders.

The ever-evolving Red, Amber Plus, Amber, Green system has kept potential travellers in a state of perpetual anxiety, whilst also preventing the UK's travel industry from making any kinds of concrete plans and crippling projected summer revenues.

The confusing and counterproductive 'Amber Plus' category was suddenly scrapped on Monday night amidst a flurry of leaks and recriminations between Shapps, Truss, Sunak and Johnson.

Helpfully, the Green list is made up largely of places that are emphatically not allowing British travellers, such as Singapore, Taiwan, Hong Kong, Australia and New Zealand, places most people would only visit on a reality show, such as Antarctica, Pitcairn, South Georgia and Tristan da Cunha, and places that are probably owned by Richard Branson, Mick Jagger, Jeff Bezos or Francisco Scaramanga, such as Montserrat, the Caymans, Barbuda and Anguilla.

We have seen Dominic Raab causing a diplomatic spat by imposing a quarantine on those returning from France due to a Beta variant uptick in Reunion, some 9,201km away, then backtracking after being told that a) Reunion itself was only on the Amber list, b) Reunion is not part of Schengen, c) France's figures on the Beta variant do not include Reunion and d) France's Beta variant numbers represent 0.6% of the total and falling.

There was the moment that our government magnanimously put Bulgaria on our Green list, only for the Bulgarians to ban UK travellers on the same day.

We have seen our PM open the borders to US travellers, in a craven move to curry favour with President Biden, only for the US to keep its borders closed to the UK.

We know, of course, that Brexit-related delays in stopping travel from India allowed the Delta variant that currently makes up 99% of UK infections to take hold in March/April.

We also know that our failure to stop flights during the first half of 2020 led to far higher infections and deaths in the first and second waves than our faster moving neighbours.

The Government's inability to make well-informed decisions, (or even to aim for steadily consistent or predictably average ones) has left us with a lamentable record of failing to protect public health whilst also ruining trust in the UK's ability to manage a crisis - amongst the public and the business community.

For the people who turned our country upside down and scattered the contents in the name of 'controlling our borders', this has been some performance.

A party held to ransom by rebellious ideologues, a government characterised by media-management and arse-covering, a cabinet of woebegone plotters and a PM with no vision, integrity or decision-making ability: if we want to understand the last 5 years of national ignominy, we need to understand how we got here and make a plan for the future.

We have talked a great deal about improving the breadth and depth of participation in politics, encouraging fresh blood and candidates of greater calibre and local experience to stand for office. But that is not enough. We have expressed support (alongside Make Votes Matter and other parties and campaign groups) for a Citizen's Assembly on the topic of proportional representation, but that alone cannot fix our dilapidated polity. We have conducted outreach events on the topics of term limits, the regulation of political donations and advertising, of making abuse of political office a criminal matter, but all these ideas, strong as they are, will not be enough to make a compelling case for Renew as the vehicle for root and branch reform in the UK.

In order to achieve that, we must also provide a realistic vision of the UK, anchored in new solutions and new approaches to long-term, systemic issues, such as sub-standard education, inadequate child-care provision, the permanent sense of crisis around the status of the NHS, the lack of upward social and economic mobility, unresolved obstacles in our relations with Europe, tax inequity, the status and responsibilities of new tech giants, precarious employment, national security and care for the elderly, to name just ten.

All these issues will be presented and discussed at our Renew Conference on September 11th in London. All members are welcome to join us for the day.

Have a great week