This week the Labour Party inadvertently revealed plans to present itself as more patriotic in a document leaked to The Guardian. Embracing the flag has been a tactic employed throughout the ages by parties, politicians and leaders in democracies and dictatorships alike, but not very often by the good ones and not always with the best of intentions.

In recent years, the Conservative-Brexit-UKIP Alliance Party© made a clear decision to pursue jingoism and dumbing-down as a quick, (very) dirty and effective electoral strategy in a time of national strife. And, for the time being, it has worked.

The Labour Party, conversely, have accidentally announced their intention to pretend to act patriotically in the hope that it might appeal to people they feel 'might not be convinced by more conventional means' (euph.) This is completely understandable, given their previous leader's anti-UK position on everything from the Skripal poisonings to Iran, the IRA, Hugo Chavez, Fidel Castro, NATO etc, etc. That damage to Labour's reputation needs to be repaired, but hiring a PR firm to tell them to stand in front of more flags, hug veterans and wear bigger poppies may not be the electoral silver bullet they are going to need.

Authenticity means everything. When Mark Francois (MP) pulls up his little Saint George's Cross Huggies of a morning, be assured that he does it with the fierce and sincere belief that he is still doing his bit to stand up for The Tommies against The Bosch with his all-day-long dryness. Conversely, one gets the impression that if Keir Starmer asked Lisa Nandy to join in and whistle the tune from 'The Great Escape', she might denounce him to Amnesty International as a war criminal and bully. On Twitter. This is not to suggest that Labour MPs are any more or less patriotic than their counterparts, but that it may not come as naturally to the Labour left as the Leader of the Opposition might hope.

As far as performative patriotism goes, there is a fairly rich seam of historical examples to examine. When Margaret Thatcher posed in a Union Jack-flying Challenger tank at a NATO training ground in West Germany in 1986, it was iconic and provocative, but no-one doubted her seriousness or her intent. Our current PM prefers his muscular patriotism with elements of low farce; waving a flag whilst stuck up a zip-line in a harness or crashing through polystyrene blocks in a 'Brexit JCB' to symbolise 'the roadblock' (*note: when researching this article I typed 'Boris crashes' into Google, to which auto-complete suggested 'Boris crashes the Pound'). 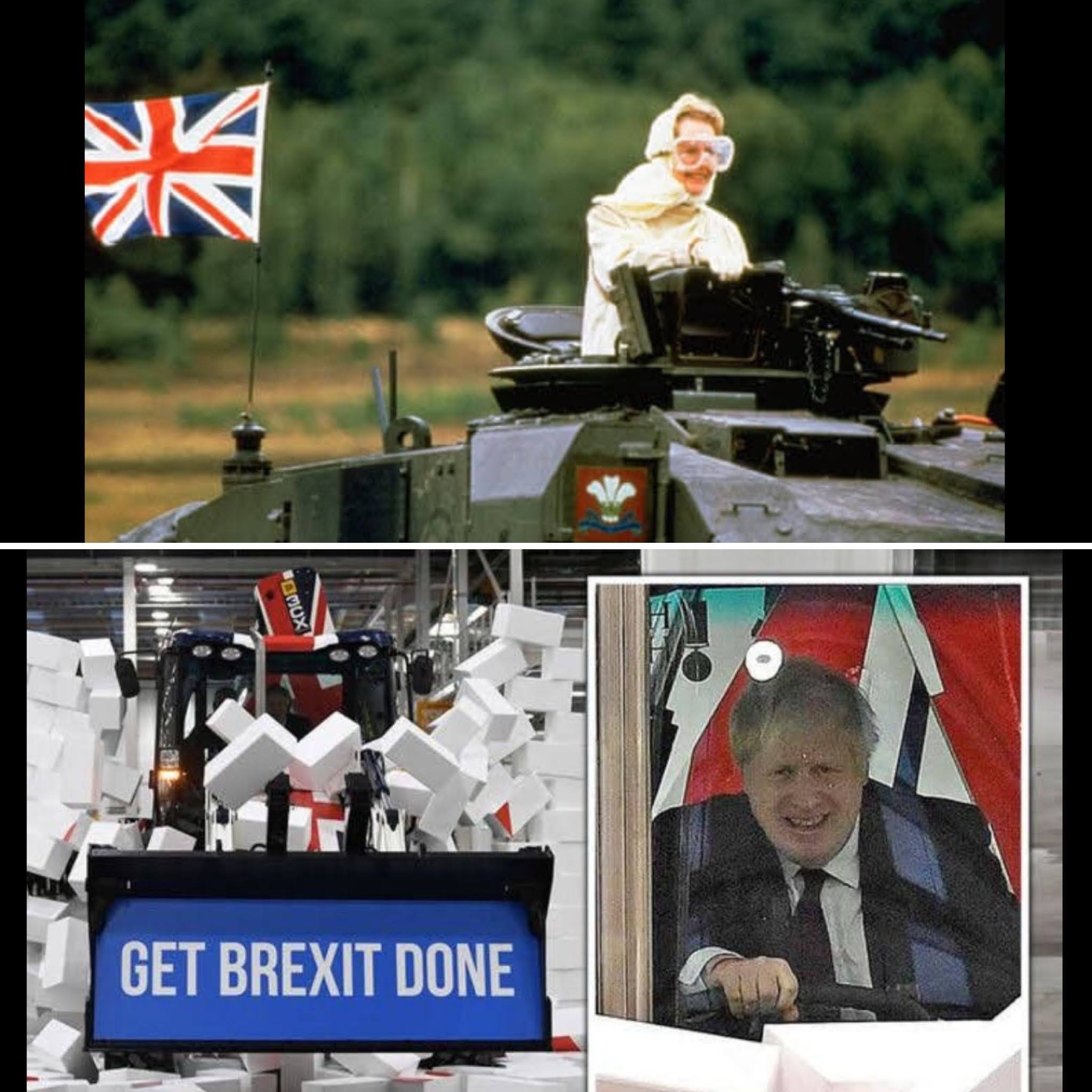 Similarly, when Labour's Michael Foot marched with CND or wore his infamous 'donkey jacket' at the Cenotaph in 1981, it sent a clear signal. Unfortunately for Labour, that signal was 'steer clear'. Labour split into the SDP and the Conservatives stayed in power for 18 years.

For those with a keen eye for historical parallels, Jeremy Corbyn wore an anorak to the Cenotaph in 2018, Labour was already split, they lost the next election heavily and the Conservatives are now on course for 14 years in power, with an option on another 4. Both Michael Foot and Jeremy Corbyn were considered to be authentic, just in a way that the UK electorate tends to soundly reject.

On the other side of the Atlantic, George W Bush's 'Mission Accomplished' photo-op on an aircraft carrier haunted his Presidency for many years and Donald Trump's literal caress of the Stars and Stripes was so weird and creepy that it will certainly flummox and appal any future alien historians. 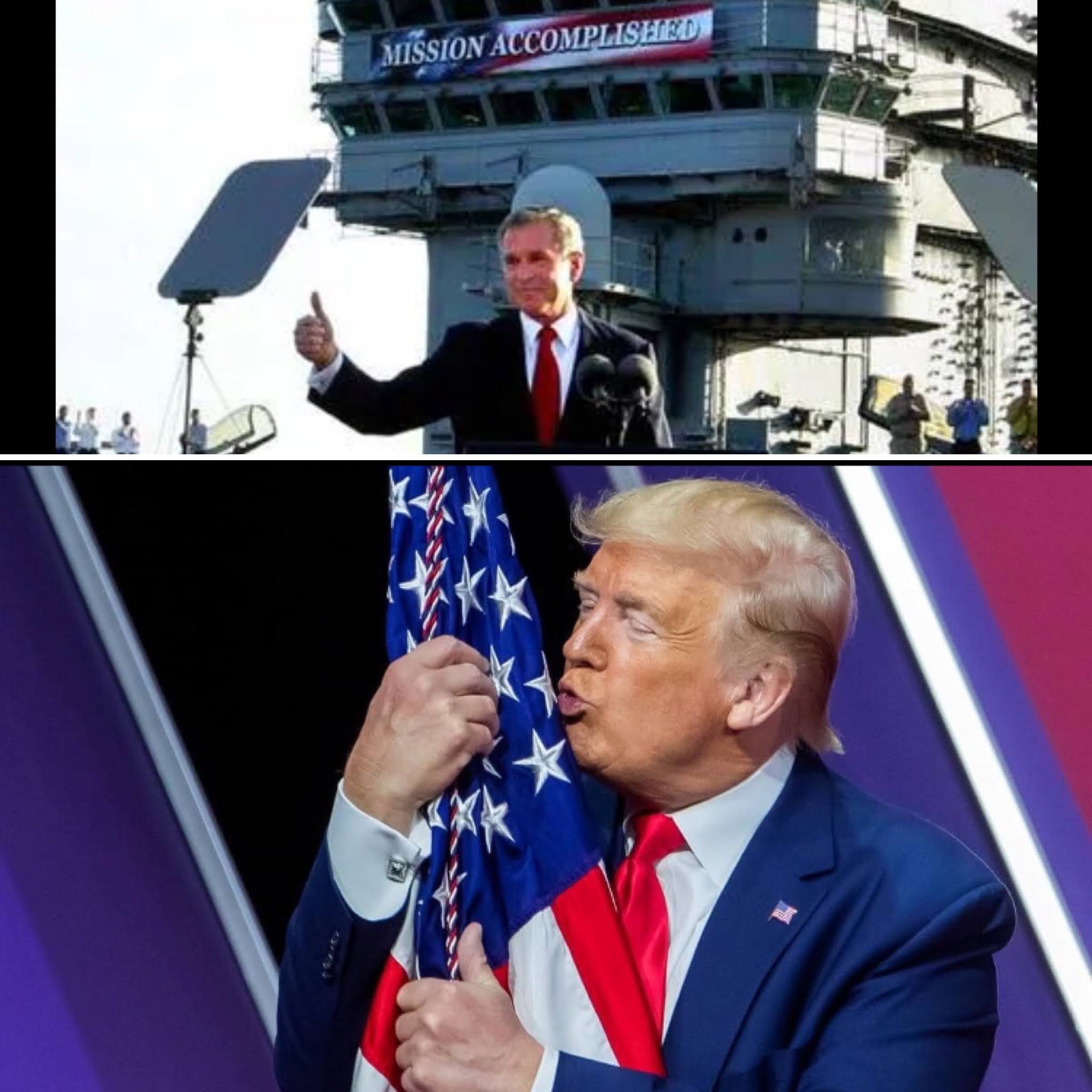 Here are Keir Starmer's problems: he was elected leader by the moderate, broadly pro-European wing of Labour, but has now backtracked on Freedom of Movement and he was also badly caught out at PMQs this week trying to deny his earlier support for remaining in the European Medicines Agency. The Conservatives are polling 43% and the Make Votes Matter campaign group are now reporting that 76% of Labour members support Proportional Representation and 154 CLPs (and growing) have passed motions supporting PR.

In order to win a General Election, Labour will need a solid chunk of Scotland and the North, and this has always been the case throughout its history. Labour needs an alliance of Northern England, Scotland and Wales (plus a smaller number of Labour redoubts in London and smaller university towns) in order to balance the solid and consistent rump of Tory support in the South and South-East of England, and to win elections. When the SNP swept up Labour seats in Scotland in 2015, a fundamental part of that alliance evaporated.

Scotland provided the first five leaders of the Labour Party, to which we can add John Smith and Gordon Brown in recent years and, for Wales, Neil Kinnock, plus PMs that represented Welsh constituencies, like Keir Hardie, Ramsay Macdonald, Jim Callaghan and Michael Foot. Since Labour cannot exist as a viable party of government without Scotland, the threat of a UK break-up is all the more deadly for the future of the Labour Party. The obvious effect of this is that, in 2024 (or maybe before), Starmer must somehow concoct a formula that regains both the pro and anti-independence voters of Scotland as well as ex-Labour voters in their former northern strongholds. Without a strong, cohesive message on both the Union and the UK's relations with Europe, this will be impossible.

As for Renew, we are currently building a position in the upcoming Scottish elections that includes a broad and reasonable appeal to those who voted to remain in the UK, but might not again, now that the UK has left the EU. Similarly, for the UK as a whole, we are building a platform that recognises the outcomes of both 2014 and 2016 referenda (and the 2019 General Election) and puts the immediate needs of UK people and businesses into focus as a priority, ahead of the divisive rhetoric that was fed in all those three votes.

This is not a simple task, but the need for an alternative vision to those offered by the failed parties of a broken system is desperately needed. The trend towards division in the recent discourse on Europe and the Union is deeply concerning and must be addressed. If you can help in our upcoming elections in Scotland and in London, please let us know. We will need every Renewer to do their part, especially in an election where online campaigning will likely be decisive.

Thanks for listening. If you agree with the need for reform, renewal and a new vision, please - Join Us, Volunteer or Donate.