You are entitled to your own opinion...

Last week, I made a trip to my local print shop to collect a few banners we at Renew had designed to support the Make Votes Matter event on Westminster Bridge (thanks again to all those who attended physically and virtually). Whilst chatting with staff, I learned that the most prolific banner printer in the area is now celebrity sibling Piers Corbyn, who has moved on from Labour Party councillor-ing and weather forecasting to become the leading light in the bravely gormless new world of conspiracy activism, alongside David Icke, former Coventry City goalkeeper, Green Party spokesman, anti-semite and renowned lizard-royalty enthusiast.

I managed to obtain one of Corbyn Sr's flyers, which is a baffling concoction of bad ideas, bad faith, bad spelling and extremely bad font-discipline.

The pamphlet is also notable for putting quote marks around the word 'Reasons' - which unwittingly reveals quite a bit about how these people regard reason. In the event, Piers shared the square with representatives of British fascism, was fined 10k for organising an illegal protest and then, unwisely, went on Good Morning Britain to get mauled by (actual) Dr Hilary Jones. 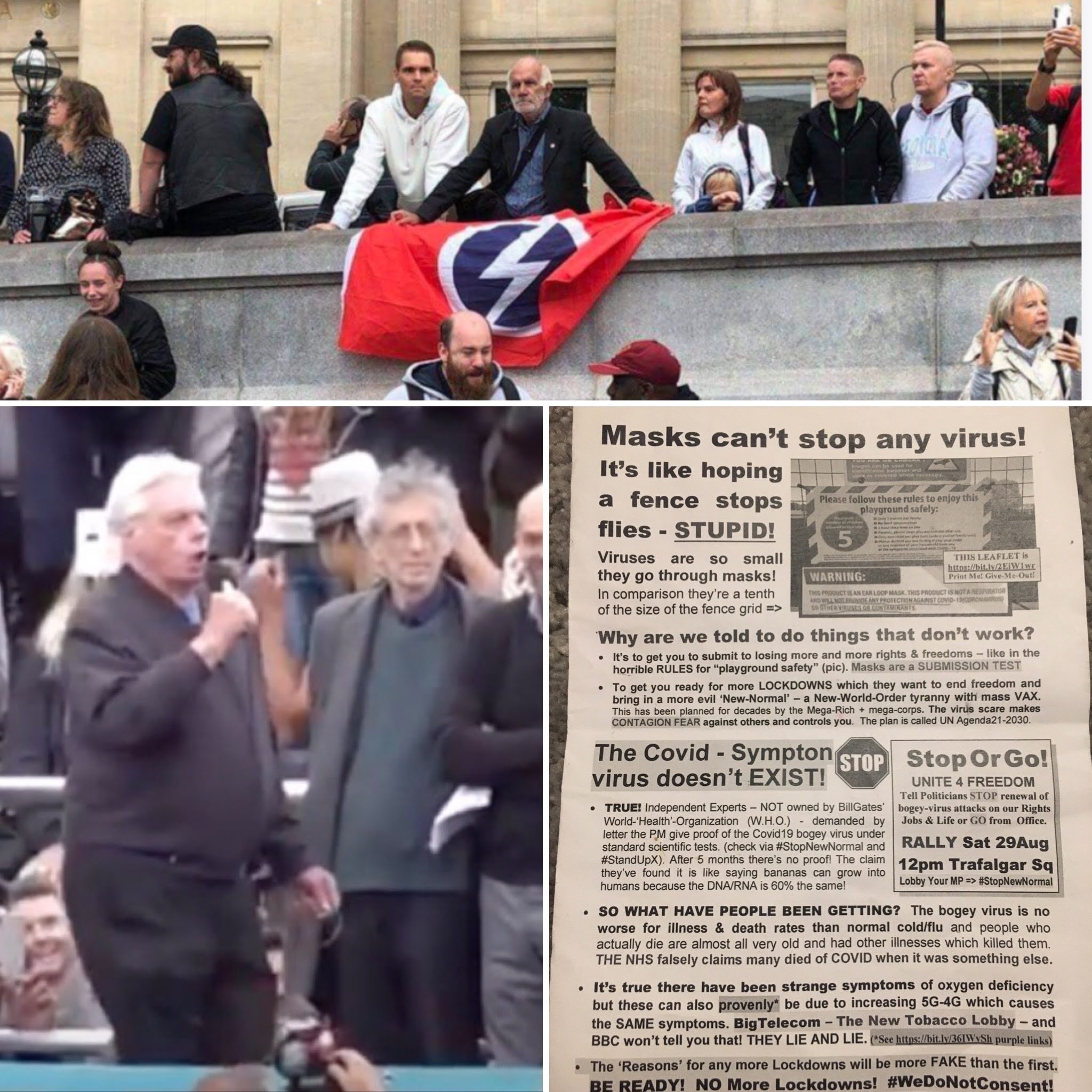 Piers Corbyn, David Icke and the fascists, just another Saturday in 2020

In other discouraging news, the BBC's new Director General (whose name is Tim Davie) has launched an attack on perceived left-wing bias in BBC comedy, suggesting that comedy aimed at the Tory Party, Trump and Brexit should be toned down and balanced by right-wing Brexit-friendly comedy. Putting aside the fact that BBC comics openly skewered Corbyn the same way they skewered Miliband, Brown, Blair, Kinnock and Foot: what might this new comedy look like and how might we be forced to laugh at it? Forgive the indulgence, but here are a few pitches.

This week also saw the feeler-announcement of a new 'Fox News-style' opinion channel, tentatively titled 'GB News' to be put together by an outfit called, 'All Perspectives' connected to US 'cable cowboy' John Malone. News of the new channel was accompanied by a dismally predictable effort to bash the BBC, which was called, 'possibly the most biased propaganda machine in the world.' by co-founder Andrew Cole.

This is probably unfair on the BBC, which has famously gifted 35 (thirty-five) appearances on Question Time to unelected Nigel Farage, and counting (which gives him the 9th most appearances on the show of all-time) and whose attempts to provide balance can be characterised by the pairing of award-winning international economists and doctors with a series of semi-sentient Wetherspoons breakfast sausages that have been trained to croak 'out', 'leave', and 'done'.

If you are not convinced that our public discourse has been coarsened and dumbed-down enough already, witness this exchange from Wednesday's PMQs, which has become watchable again, for all of the worst reasons.

Starmer: [quoting a Tory MP on the examinations u-turn] "It's mess after mess (his own MPs) u-turn after u-turn, it's a fundamental issue of competence, god knows what is going on, there's no grip. His own MPs are right aren't they?"

Johnson: “This is, uh, this is, uh, a... leader of the opposition who backed, uh, mm... remaining in the EU and now is totally silent on the subject, now has performed a u-turn. He backed... he backed, uhm  – in fact he still does Mr Speaker – uh, this is a, uh umm leader of the opposition who supported an IRA-condoning, uhh politician who wanted to get out of NATO and now says absolutely nothing."

With a PM who, when cornered, instinctively shouts 'remainer!' as an insult, it appears that the stage is set for UK news media to descend into the same toxic swamp of acrimony as the US media.

In a more innocent time, US Senator Daniel Patrick Moynihan reminded his opponents, “You are entitled to your own opinion, but you are not entitled to your own facts.” As we encounter a new and dangerous culture where opinion masquerades as fact, it's crucial that we continue to hold our media to account, just as we hold our politicians.