It's been a tough week for everyone, not least the government.

On Wednesday we learned that only 2,000 NHS staff have had tests for coronavirus. That's out of a total of half a million front-line staff. Last week's claims that millions of tests would be ready in days for the broader population, distributed by Amazon and Boots, have proved to be untrue. As we are promised 30,000 new ventilators, only 30 are delivered. NHS staff are jerry-rigging homemade masks from elastic and photocopier acetate sheets. The Chancellor offers help for small businesses and freelancers, but nothing will be available until June, if at all. In the meantime, a million people have applied for Universal Credit, a benefit that in the best of times, takes five weeks for the first payment to be made.

In an unprecedented display of solidarity every newspaper from the Mirror to the Telegraph is attacking the government for incompetence and poor planning.

In truth, two main factors have resulted in our poor performance so far in the crisis:

The first is underinvestment. It's very nearly 10 years since David Cameron took over as Prime Minister. His austerity policies, initially made to address the aftermath of the GFC, continued in his second government, in Theresa May's and now in Boris Johnson's. We can debate the rights and wrongs of austerity as a policy, but we must agree that extending it to the point of endangering our doctors and nurses and leaving our most vulnerable at high risk of dying from preventable causes, is unforgivable.

The second is competence. From the moment Johnson took the reigns, it was clear that political vision, substance and action would take a distant second-place to performative announcements, bluster and sloganeering. The gamble was that the economy would look after itself and Johnson and Cummings could focus on pursuing the culture war to remain in power as long as possible. Respectable Conservatives like Clarke, Grieve, Gauke, Lee, Gyimah, Vaizey, Hammond et al were removed and replaced by second-rate 'yes' men and women. When a genuine crisis emerges, of course, you cannot govern by bluster: you need the substance, the skills and the leadership. A crisis unveils unwelcome truths and forces us to look at our country with a colder, more objective eye.

Once we get through this crisis (and we will) there needs to be a period of reflection, and, likely, a public enquiry into our preparedness and why the findings of 2016's pandemic preparation exercise were ignored (spoiler: to save money).

Those of us who watched the excellent TV show Chernobyl last year will not have forgotten its chilling, but hopeful, leitmotif:

“Every lie we tell incurs a debt to the truth. Sooner or later that debt is paid.”

What projects have you planned to pass the time? We want to hear all about it! Please send us any ideas, tips or videos which migh thelp with the long days ahead.

And head to Renew's coronavirus page for all the up-to-date information on how we should be handling the pandemic, including relevant links to official sources, as well as some feel-good news on what Renewers have been doing for their community, and little light-hearted relief. 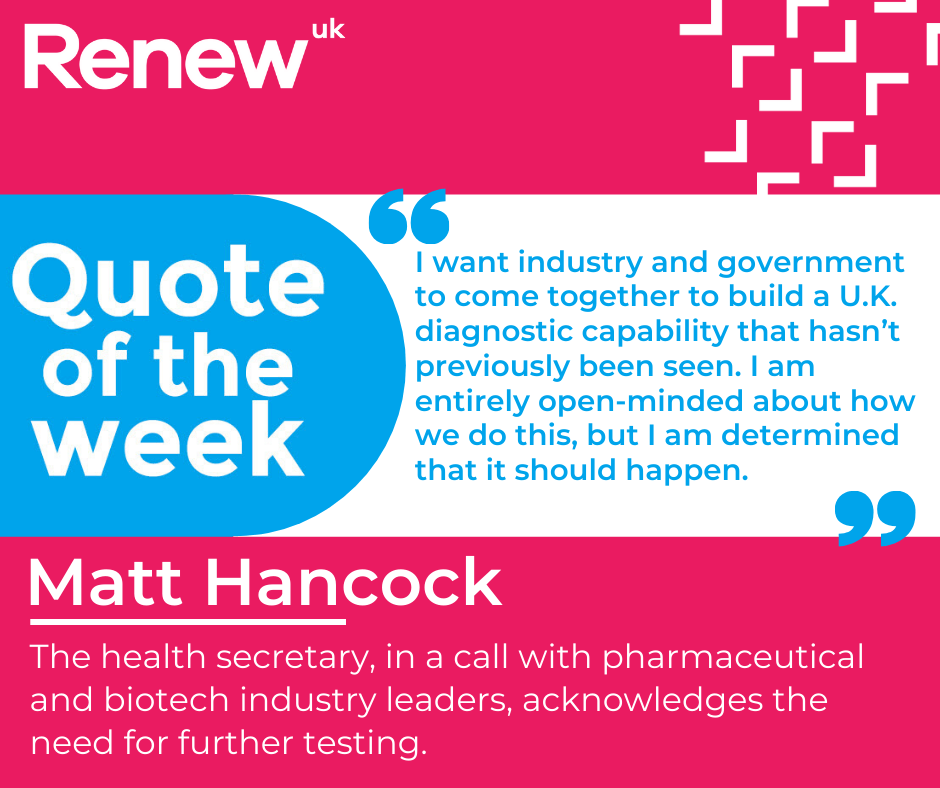