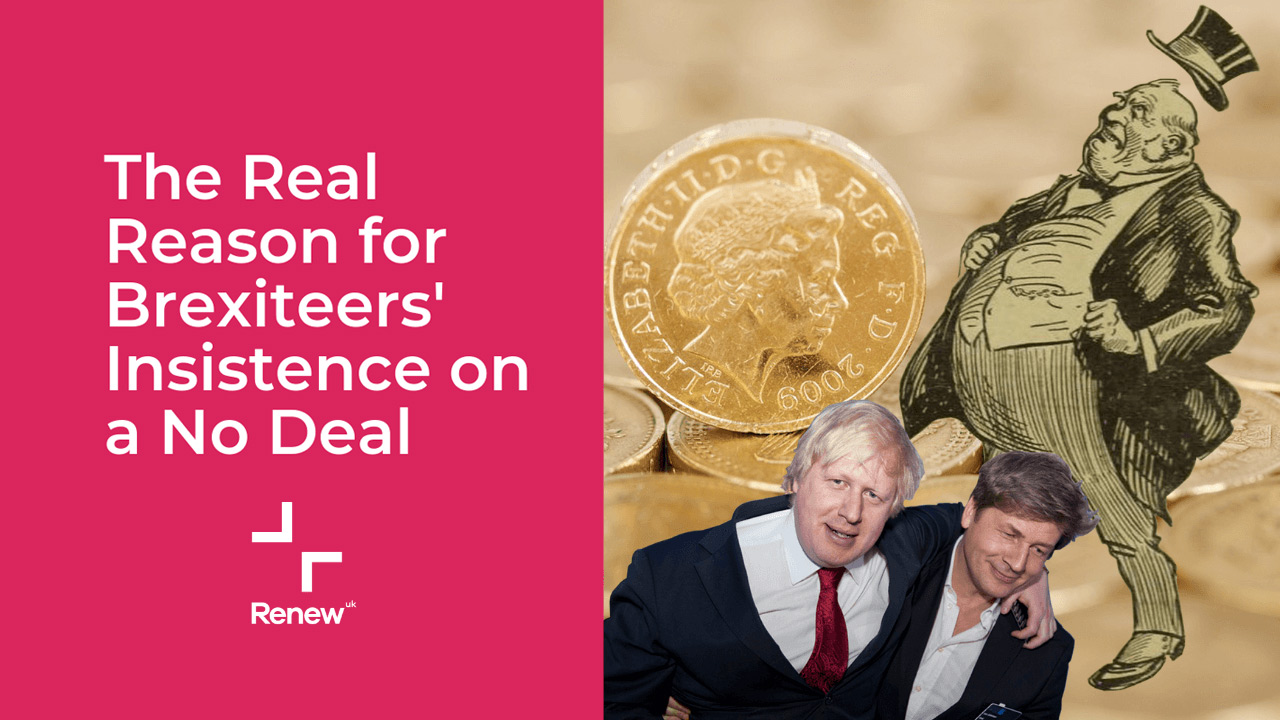 The Real Reason for Brexiteers' Insistence on a No Deal

In this opinion piece, Renew's Gwen Jones explores the potential impact of tax avoidance laws on attitudes to Brexit among certain hardline Brexiteers.

Warnings of economic armageddon have done nothing to deter the ranks of hard-line Brexiteers who continue unabated in their scramble for a no-deal Brexit.

Perhaps the experts are wrong, after all. Perhaps the likes of Johnson and Rees-Mogg have been right all along, and prophecies of tailbacks at border control, empty supermarket shelves and fiscal ruin are nothing but products of ‘Project Fear’.

Or maybe, just maybe, there’s more to the story.

Call me a cynic, but one can’t help but notice something a little off about certain individuals’ spontaneous change of tack in favour of a no-deal. Lest we not forget, Brexit heavyweights Nigel Farage, Boris Johnson, Jacob Rees-Mogg and even Arron Banks were all openly supportive of the single market in the run-up to 2016.

What changed? Perhaps it’s the Anti Tax Avoidance Directive or ‘ATAD’, the EU’s latest and most forceful attack on corporate tax avoidance active as of this month. The act will tackle many of the

most pervasive forms of tax avoidance, such as preventing companies from shifting profits to a third country to take advantage of lower taxes. From now on, tax will have to be paid in the EU before profits can be channelled overseas. Companies will also no longer be able to partially develop products in the EU before shifting the final stages of development elsewhere, as taxes will now have to be paid in the EU according to the value of the product developed on EU soil. The final commitment in the act is a general, catch-all clause which aims to clamp down on ‘aggressive tax avoidance’ in all its forms.

It goes without saying that tax and the law make an unattractive couple, and it’s unlikely, to say the least, that wealthy Brexiteers and their donors will take kindly to ATAD. Up until now, the UK has managed to establish itself as a tax haven for big business, slashing corporation tax from 28% to 20%, introducing advantageous tax regimes for multinationals with overseas subsidiaries and tax breaks for patent-owning companies.

It is in the interest of MPs and their super-wealthy backers to maintain these loopholes. After all, if Boris Johnson is getting handed out £10,000 a pop for making speeches in front of JCB diggers, you can understand his willingness to keep backers on side. Heads of the pro-Brexit press are also renowned tax avoiders; the Barclay Brothers, Rupert Murdoch and Lord Rothermere all hold non-dom status in the UK.

Continuing Britain’s membership of the single market would keep us aligned with EU tax avoidance policy. To avoid tougher regulations, Brexiteers have no choice but to pursue as hard a Brexit as possible. When proposals were first tabled back in 2015, Britain did its utmost to protest them. Earlier that same year, Conservatives, UKIP and DUP MEPs voted strongly against EU plans to force companies to report where profits are made and pay taxes accordingly. The plan included the adoption of a unanimous definition of tax havens and a system of co-ordinated sanctions to be imposed on countries that refused to cooperate. In 2013, Cameron wrote personally to the president of the European Council pleading for offshore trusts to be exempt from the EU crackdown. Try as they might, EU regulation rumbled onward, much to the displeasure of its opponents. As plans became more concrete, so did Brexiteers’ allegiance to a no-deal. Coincidence? Maybe.

In the absence of hard evidence, the matter remains merely speculative. It is for the reader to decide whether tougher tax avoidance is one of the drivers of the urge to split categorically from Europe, or simply one in a vast web of EU regulations from which Brexit supporters wish to free themselves.