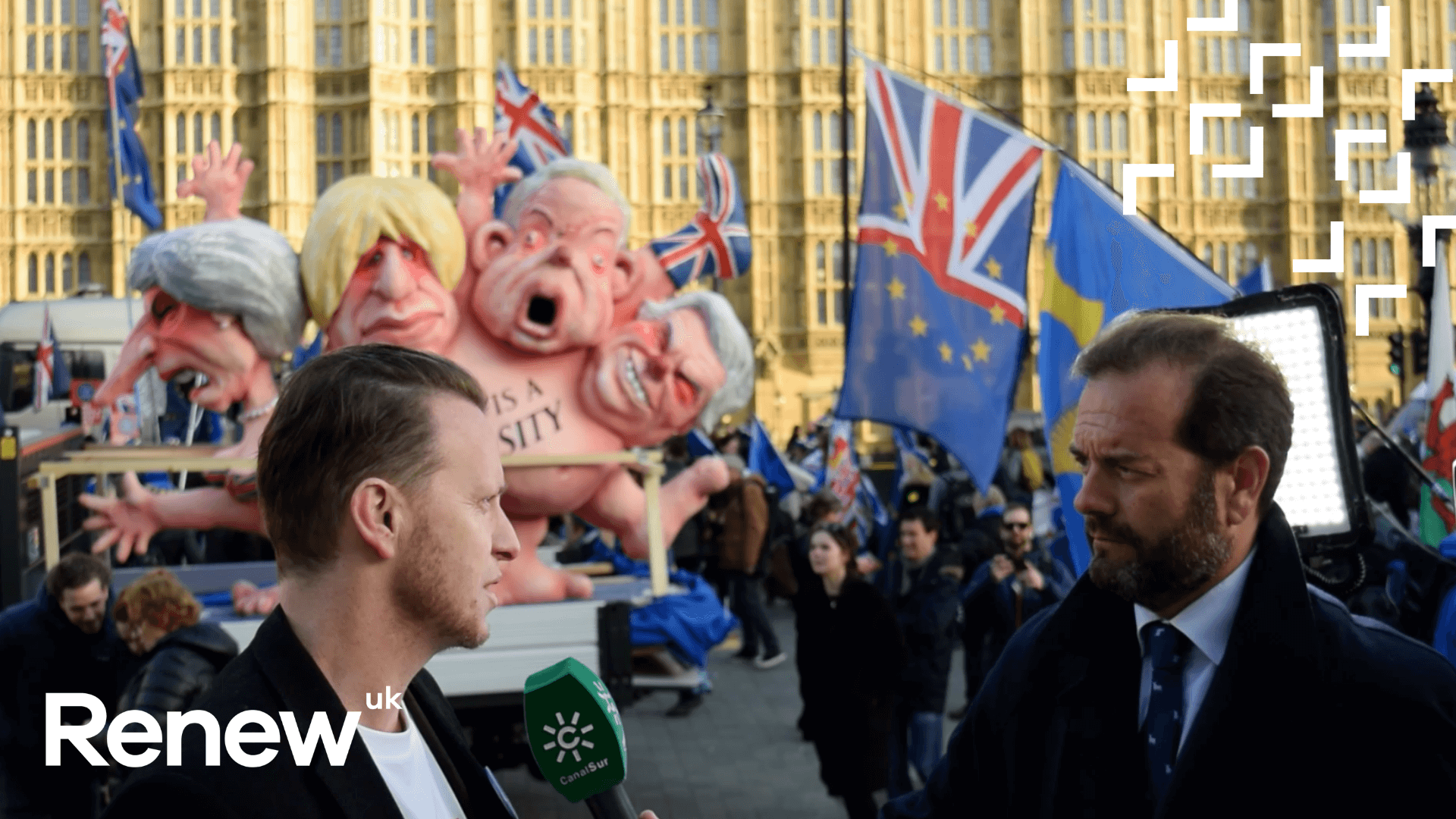 Brexit is Turning UK Politics into a Farce. Seriously.

Renew Deputy Leader James Clarke gives the lowdown from a bizarre day of protest outside parliament.

Today in Parliament Square and College Green, a 'Vote Down the Deal' rally and a 'Brexit Betrayal' counter-protest went ahead in spite of the government's shabby decision to delay the meaningful vote for another day.
On a bright and sunny December morning, the proceedings began well and in good humour, with the two sides (separated by a busy road and two sets of metal and concrete barriers) exchanging Brexit banter.

The Remain side had the numerical advantage and also the decibel advantage, with the redoubtable 'SODEM' Steve Bray controlling the mic, leading the chants and bringing in guests, including a cellist and his excellent baritone rendition of 'God Save the Queen'.

A slightly surreal and peculiarly British jollity seemed to pervade the atmosphere, with the Brexiteers enjoining motorists to 'Honk if you voted Leave' and the Remainers chanting 'Empty bus, empty promises!' as the oddly passenger-less 'Betrayal' bus conducted its umpteenth circuit of the square.

Tellingly, the Leavers were divided into two groups, an extremely vocal and slightly aggressive group that resembled a Yaxley-Lennon rally and a quieter group, led mostly by women, who kept their distance from both sides.

Tourists looked on bemused at a grotesque model of May, Johnson, Gove and Davis, entitled 'Brexit is a Monstrosity' and Londoners punctuated the day with their passing perspectives.
"Bollocks to populism!", bellowed one cyclist, to no-one in particular.

One unexpected occurrence was the presence of two religious fellows, who were attempting to hijack the politics to spread their message. One, with a battery-powered mic and speaker, exhorted the Remain side to "REPENT OR BURN IN HELL"; the other silently held a placard, warning the Leavers that, 'BEFORE WORLD WAR 3 TRUMPET WILL BE BLOWN EVERYBODY WILL FALL UNCONSCIOUS AND DIE EXCEPT THOSE GOD WANT TO KEEP.'

International journalists wandered through the crowds with curious expressions on their faces, trying somehow to make sense of this strange new country and its unique political street theatre. Westminster now feels like a reality show gone wrong.

These scenes and ones like them are being replicated every weekend throughout the UK and it appears that the one thing May's government has unquestionably achieved is to unite Remainers and Leavers in indignation.

Even as the polls tick towards a People's Vote, it is still a brave gambler who would predict the actions of this volatile government or its supine opposition.

Whatever the outcome, it is clear that the public are not prepared to reward the parties that have turned UK politics into farce.

It's time for something new.
It's time to Renew.