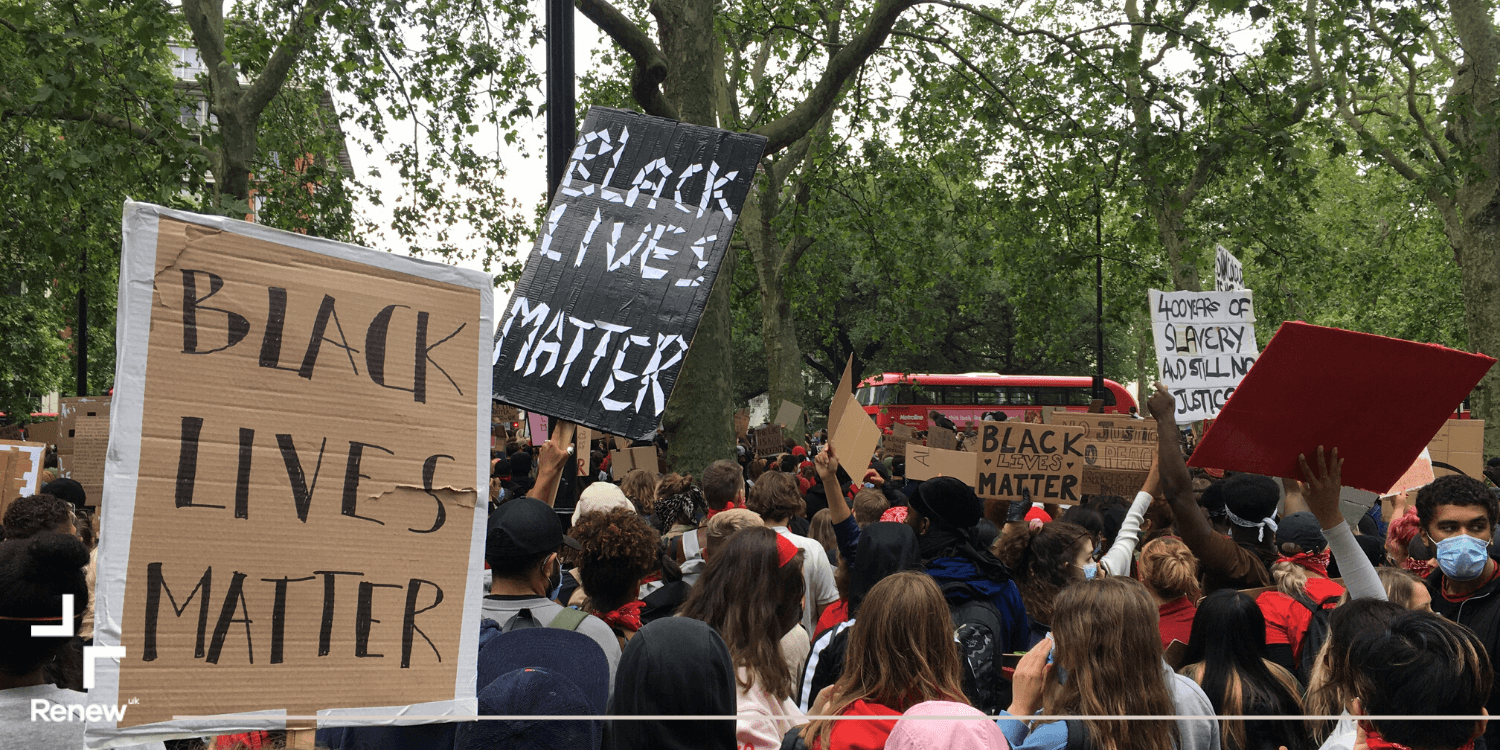 John Bates, Renew member and councillor for Morecambe, explains why doing nothing is not an option.

The current upsurge in the Black Lives Matter campaign, triggered by the death of George Floyd in America, has once again brought to the fore the disparate treatment of Black people in society. At the same time, as with any major campaign, there has been a rise to prominence of counter-protests. It is my view that the instigators of the counter-protest are probably white supremacists. But it cannot be ignored that they bring along with them many otherwise, ordinary, run of the mill people who, under any other circumstances, would support, or at least not oppose, cries for equality in less fractious circumstances. These otherwise decent people share posts on Facebook, which, while ostensibly upholding traditional values of respect and patriotism, serve only to move the subject away from the important one of much-needed reform, onto the easier platforms of Law and Order, Vandalism and respect for National Freedoms and traditions.

It is a successful tactic. Once the mind is diverted from the fundamental injustice it becomes easier to brand the original campaigners as vandals or thugs or malcontents. The justice of the cause is lost in a welter of condemnation of direct action without any real consideration being given to the fundamental injustice or inequalities which lead to the protests in the first place.

So, on Facebook, we read claims that George Floyd was no angel, that he was a serial offender. These posts go on to question the appropriateness of the elaborate funeral arrangements, implying that all this "fuss" or "celebrity" treatment is undeserved. The sinister yet unspoken implication behind this post is, of course, that George Floyd's life, let alone death, are not worth such commemoration. Our attention is thus diverted from the appalling facts of his death, away from the fact that in a civilised society, everyone should be treated with respect under the law, particularly from those whose job it is to uphold that law.

Our Prime Minister in Name Only decries the defacing of statues and memorials in the name of protest, and in doing so, immediately ascribes more importance to those artefacts than to the underlying inequalities which give rise to the protests. Once again, the ground for debate is shifted.

On Facebook again we see the fatuous slogan "All Lives Matter." All manner of meaning can be read into that statement, but for many, it is seen as diminishing the "Black Lives Matter" slogan. Black Lives Matter campaigners are thus painted as only having a narrow and selfish interest, rather than compassion for society as a whole. At a stroke, the real message, that Black Lives are all too often, demonstrably and institutionally, worth-less in the eyes of society, is deleted and the argument is shifted onto safer, but essentially, meaningless ground.

Our Prime Minister in Name Only declares the formation of a far-reaching (world-beating?) inquiry into racial inequalities and leaves the arrangements for it in the hands of a person who has already made known her scepticism about institutional racism.

Will that inquiry give any consideration to the manifestly institutionally racist Windrush scandal?

How will that inquiry improve on previous inquiries whose non-implemented findings shout just as loudly about institutional and chronic, racial bias?

Is there any chance at all that the inquiry will even address the notion that an upsurge in campaigning and direct action is the inevitable result of generation after generation suffering inequality and indignation with no redress and little or no understanding of their long-held and justifiable grievances being shown?

It is difficult to see this inquiry as anything other than an institutional fig leaf, poorly designed to cover this Government's shame.

"History is not to be erased just because you may not like it!"

Or other such shallow twaddle.

There can be dozens if not hundreds of replies to such statements. Henry Ford told us that history is bunk. Many others have told us that history is written by the victors. Whatever answer you choose, there can be little doubt that our history as a nation, whose wealth was built on the proceeds of slave trading and the appropriations of Empire, never fully includes or dwells on the evil of those times. I have never met anyone who seriously wants to rewrite or erase history, but I know there are those who think the time is long overdue to examine its truths. I have no doubt that the ramifications of slave trading and empire are only understood by a few when they should be made clear to all. I also know that the deep and burning injustice felt by the descendants of those oppressed by the slave trade and the imposition of empire are only imperfectly appreciated by those who have never felt that oppression.  The removal of deeply offensive statuary is not an erasure of history, it is a much-needed acknowledgement of evil.

Change is long overdue. I doubt that such change will come easily and almost certainly not as a result of yet another inquiry, even if well-meant, and I detect no honest intent in this latest sop to the BLM campaign. It seems to me that something much more profound is required. At the cessation of Apartheid in South Africa, the more immediate and vicious inequalities of that policy could have led to widespread and violent conflict. That the pent-up resentments and anger of that time of repression and cruelty did not lead to wholesale slaughter is, in large part, due to the wisdom, foresight and generosity of Nelson Mandela and his institution of the Truth and Reconciliation Commission. That action enabled opposing sides to face unpleasant truths and to achieve understanding, remorse and forgiveness in ways that no public enquiry formed by a cynical and sceptical government could do. Generations of world-wide domination and exploitation can only ever embed a deep-seated sense of superiority on the one hand and equally profound resentment on the other. In the worst of us, that attitude of superiority has led to an ingrained and xenophobic hatred, and, in the victims, a justifiable rejection of a system and polity which has consistently refused to acknowledge the need for change.

What is needed is something akin to the Truth and Reconciliation Commission. A forum where each side can learn from the other. Of course, the learning will be greater on the part of those who do not at present understand the legacy of the slave trade and of empire, but equally essential is that the Black community can see and be a part of the processes which are implemented to address the centuries-long injustices for which reparation has never truly been made.

The Prime Minister in Name Only will tell you that he is not racist and cannot see that his "letterbox" and "watermelon smile" remarks are pure racism drawing, as they do, on race memory and ridicule of the non-white, non-Christian Other. Such a man will never address the problem if only because he does not believe there is a problem. And there are many others like him in the country. I am not referring here to the white supremacists, who I hope are mercifully few, and who simply represent a combination of ignorance and all the worst human traits. I refer to those whose understanding is subtly blunted and led away from proper understanding by the dishonest social media posts and all the years of sustained misinformation from a partial tabloid press, designed only to mislead and subvert honest people away from the inherent decency which directs most of us. If government will not do it perhaps others can. If enough of us begin the process surely we could make a difference. It might only take a few good people to raise the standard of decency so that others might flock to it.

Of one thing I am sure: doing nothing is not an option.