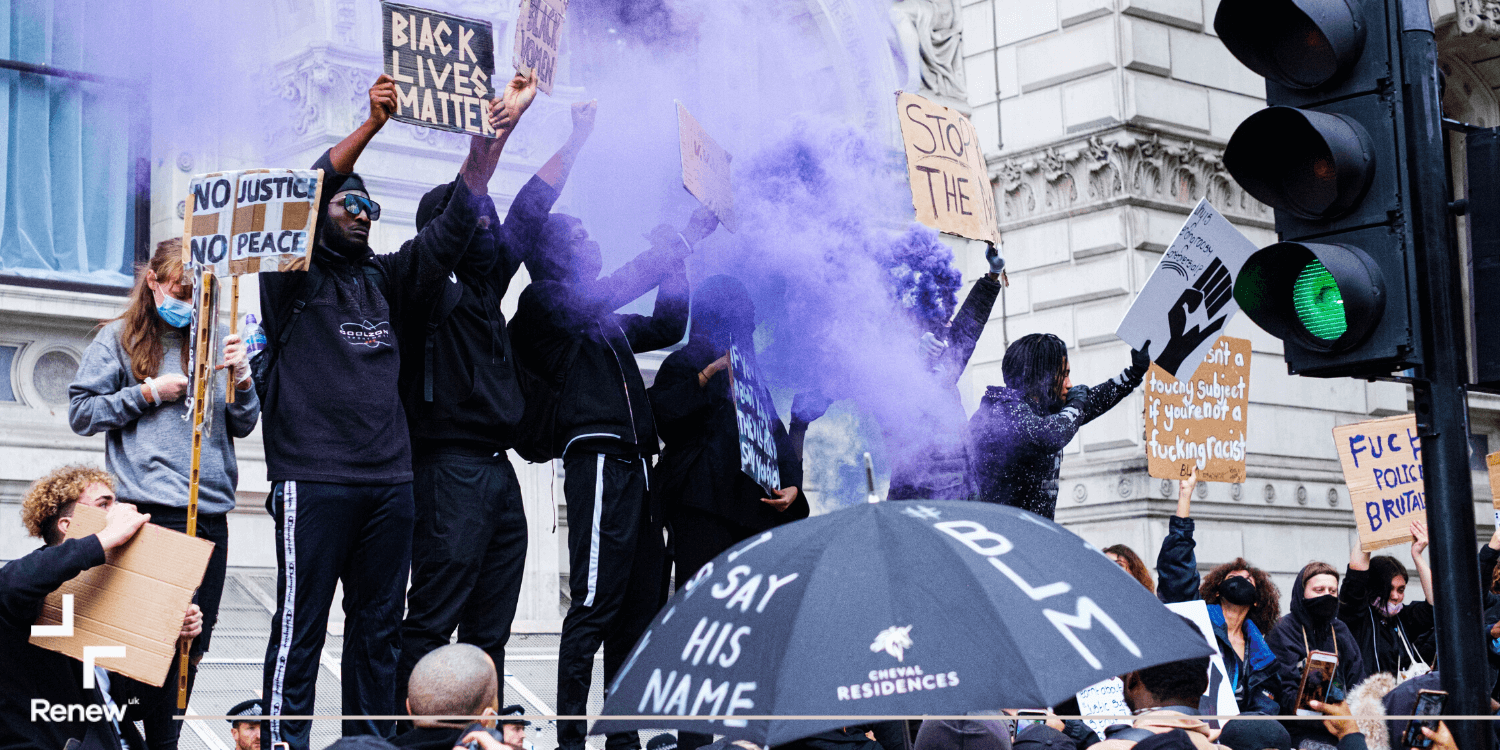 Anti-Racism Protests in Britain: What’s Next?

Renew supporter Zach Mayford argues for the removal of the statues of slave traders.

As the coronavirus pandemic stretches on and “the new normal” grows older ever day, another pandemic is stirring hearts and minds across the globe: racism. George Floyd’s death at the hands of the Minneapolis police department sparked a monumental movement of anti-police-brutality and anti-racism protests. These erupted not just in the States, but around the world, from South Africa, to France, to the British Isles.

The movement has struck a deep and reverberating chord across the UK in individuals and institutions alike. Every major city has a protest movement, with networks of activists campaigning for socio-political change. It’s stirring to see such demonstrations, many masked and socially distanced, echoing Floyd’s last words: “I can’t breathe”. Some of the most evocating protests involve crowds kneeling out of respect, like the American athlete and equality activist Colin Kaepernick. Similarly, some protestors lay on the ground for 8 minutes and 46 seconds, the exact amount of time Minneapolis officer Chauvin fatally knelt on George Floyd’s neck.

Such crowds, and such evocative demonstrations, are already forcing words from the mouths of British politicians. Boris Johnson originally echoed Donald Trump’s condemnation of the activists as “thugs”, and even progressive figures like Nicola Sturgeon urged protestors to find alternatives to physical demonstrations. Many mainstream publications have paired Britain’s abysmal struggle to combat COVID with the BLM crowds, alleging their responsibility for public jeopardy. The truth is, the same publications and politicians were uncritical to the point of jubilance when presenting the white faces packing out sunny beaches or celebrating VE day. BLM activists are bracing themselves for the inevitable branding of brown and black faces with the blame for Britain’s failures. We must think critically about which groups are the root causes of Britain’s inability to compete with other countries in this crisis. In reality, the UK government has systematically failed to provide enough PPE, testing, or even coherent advice to combat the pandemic effectively.

Yes, large, compact, and unprotected crowds spread coronavirus, but that’s not what BLM are advocating for. Activists and organisers are telling protestors to wear masks, to bring hand sanitiser and to physically distance at rallies. They are saying it with far more unity, clarity, and consistency than the UK government ever has. By contrast, police tactics like kettling and mass detainment pose serious concerns for infection and transmission, as do the discriminatory over-policing and violently physical arrests that sparked the protests in the first place.

It may seem far removed that British protestors, and other international activists, are marching about injustice thousands of miles away in America. However, racism is not just an American issue. Many, including prominent journalist and scholar Afua Hirsch, have eloquently argued that American racism was created and exported from right here in Britain. Black Brits are five times more likely to die in police custody than their white counterparts, and while only three per cent of the British population is Black, twelve per cent of the prison population is Black, due to over-policing, harsher sentencing, and disparity of economic opportunities.

Such disparity stems from Britain’s racist past, and the whitewashing, if not glorification, of the empire’s crimes. Protestors are turning to this legacy and tearing down the physical remnants of the slave-trading past, focusing their anger on statues. In Bristol, anti-racist activists tore down an effigy of the prolific slave trader Edward Colston and launched it into the marina. How poetic that the statue of a man who profited from transporting nearly 100,000 people across the Atlantic, killing almost a quarter in the process and tossing them into the sea, met its own demise in the same way, rejected, underwater. Immediately, Sir Keir Starmer, supposed saviour of the Left in Britain, labelled the activism as “absolutely wrong”, showing how out of touch both sides of the political establishment are with the country’s current climate.

As many are pointing out online, the act of removing such statues is teaching people more about British history than they ever did upright. Major cities across the nation, initially Manchester and London, are launching huge enquiries into all their statues and their links to slavery and white supremacy. As of the 9th of June, the Canal and Rivers Trust in London has already removed its statue of the slaver Robert Mulligan from the docklands. If anything, it was lucky to escape the waters of the canals and rivers which the Trust administers. A statue of the mass murderer and colonial overlord King Leopold II has already fallen in Belgium and the statue of Cecil Rhodes in Oriel College Oxford looks like its next on the list. Some call it the destruction of history. Other, with good reason, call it the production of a new, more balanced history. Whilst only symbols, these statues put slave trading and white supremacy on a literal pedestal. The debates around these statues, and their lasting presence in the 21st century, are already promoting vitally representative education and positive socio-political shifts.

With each protest, things change incrementally around the world. Cases are being reopened across the states, with activists successful demanding accountability for needless black deaths. Apart from the marches and the falling statues, the movement is provoking important introspection on this side of the pond too. Social media is ripe with educational posts and constructive reading lists. Attention builds around the case of Belly Mujinga, a black railway worker who was spat on and died of coronavirus. The CPS are now reviewing the case “in light of public interest”.

So what is next, and what can you do?

First and foremost, be an activist, and/or be an ally. If it’s safe, protest in a socially distanced way. If not, donate to urgent causes, share information, and sign petitions, particularly concerning the fair and representative historical curriculum of British history. Renew your politics, and be creative as you push for a kinder, fairer, and better society.