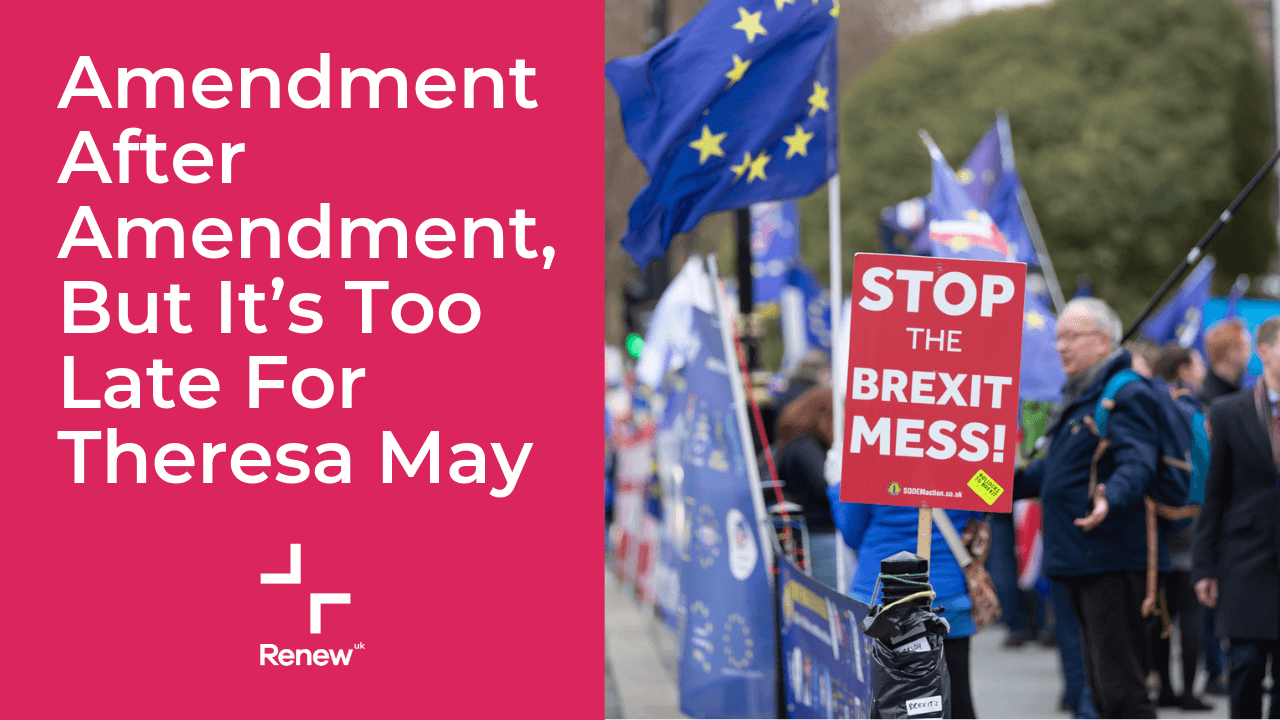 Amendment After Amendment, But It’s Too Late For Theresa May

The Prime Minister has bought herself precious time, but at the cost of a deal she knows she cannot deliver.

Two of six amendments succeeded in gaining a majority.

First to pass was the so-called Spelman agreement, an expression of Parliament’s opposition to no deal. While perhaps symbolic in its own right, the amendment has no legal force; a mere imitation of meaningful decision-making.

More ludicrous was the subsequent rejection of an amendment that would have allowed Article 50 to be extended beyond the current deadline of March 29th. Parliament may be opposed to a no-deal Brexit, but it has now shot down one of its last remaining hopes of avoiding it.

And yet, spirits were high among Tory MPs. Their biggest win came when the Brady amendment, which gave the Prime Minister backing for her deal provided she returns to Brussels to renegotiate the hated backstop, passed with 317 votes to 301. The vote united Tory MPs from all sides of the party and their DUP allies, bringing a much-needed sense of peace to the ranks.

Indeed, despite appearances, the night went about as well for the Prime Minister as it could have done. Amendments tabled by Yvette Cooper and Dominic Grieve, which would have allowed MPs to take control of Brexit into their own hands, were also voted down. 14 Labour MPs defied the whip to topple the Cooper amendment, a sign that they may still come round to May’s deal if
adequate concessions are made.

There’s a catch though - this is a pretty big if.

May now has until February 14th to renegotiate the backstop with Brussels. Though she has succeeded in buying herself valuable time, one suspects that her celebrations might be short-lived. The Brady amendment talks of replacing the backstop with what it mysteriously refers to as ‘alternative arrangements’.

Ah! Alternative arrangements! If only she had thought of those before…

If the PM fails to secure substantial changes to her current agreement, the support captured on Tuesday will be lost in an instant. Noises coming from Brussels so far suggest that there is no room whatsoever for renegotiation, something the EU has made clear since May’s deal was first finalised. The idea that, in two weeks, the Prime Minister will renegotiate a deal that took 18 months and three Brexit Secretaries to secure, is pure fantasy. The Brady amendment doesn’t specify what ‘alternative arrangements’ might mean, for one very simple reason - it can’t. An alternative arrangement to the backstop simply does not exist.

While consensus in the Commons may have strengthened May’s hand, it is highly unlikely that she will return in two weeks time with anything that even comes close to satisfying the hardliners in her party. If and when May comes back empty-handed, Tory unity will vanish, as quickly as it was formed.

As the clock continues to run down, with deadlock looking set to continue, a no-deal looms ever larger as the default outcome of the crisis. Avoiding it will require a degree of cooperation far greater than either side has managed to muster so far.